Taking off my rainbow colored glasses 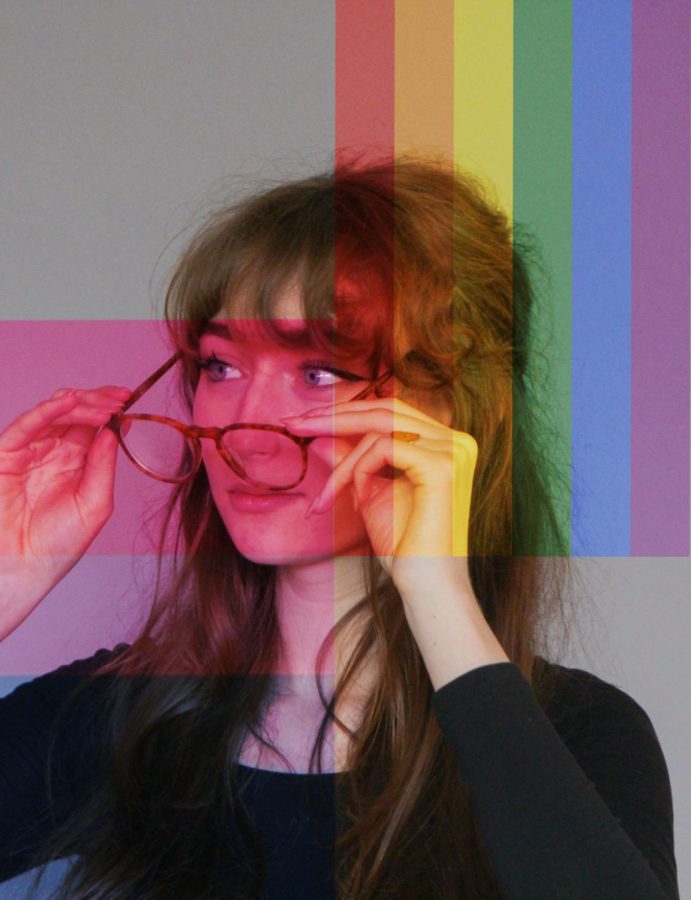 Entering a sleepy, seventh grade, science class, a figure appeared in my view. I went to a small K-8 school, and by this eighth year, we all knew each other. The girl, Lila*, was someone I enjoyed being around when she was her funny and authentic self, but she and her friends had a vindictive, ignorant nature. They could torment people.

“I heard something about you,” she said. Then, lowering her voice so others wouldn’t hear — she was always the nicest of her friends — she asked, “Are you a lesbian?”

An immediate, “No!” slipped from my lips. I didn’t want to come out in this way. It was not necessarily a lie – I am not a lesbian. I was generally very comfortable with my bisexuality at this point. I grew up in a family where gay was more than okay, it was the family. Gay men raised me, they lived across the street and were my emergency contacts. The afterschool program at my school was run by lesbians and drag queens who regularly taught us about acceptance. When I had come out to close friends, I was only met with love and a few “I think I am too”s.

With this support system, I did not plan on hiding my sexuality from my peers. But when asked without warning, I was not prepared to confess. I didn’t realize how uncomfortable coming out could be when stripped of choice or when the receiving end didn’t grow up watching Rupaul’s Drag Race.

During second period, I was approached again, this time by both Lila and those less-nice friends. I knew I was back in the ring. Class became an interrogation as I was grilled with questions about my widely discussed sexual orientation. I denied each and every accusation. They believed me, and in the comfort of what they thought was a straight person, began firing off homophobic microagressions.

“I knew she couldn’t be gay, she wears all that makeup.”

Later in middle school, I debated the group who confronted me that day about the morals of homosexuality a few times, but to no real avail. My arguments did not seem to budge their opinions: “This is just how I was raised,” one said. “It’s nasty.”

When homophobia is encountered in San Francisco, it’s reasonably met with harsh resistance; no one has time for close-minded ideas about queerness in the gay capital of the world. Being queer myself, I have never been particularly patient with ignorance. Most of the times that it has faced me, I have fired back insults so mean they can only be described as poetic. But ignorance does not come from nowhere and really awesome comebacks aren’t the tools to make it go away. By trying to understand where homophobia comes from and realizing that some  people might not have been lucky enough to be taught the empathetic perspectives that I was, I’ve been able to address issues like homophobia in a more constructive and forgiving way.

A few years later, I sat on the annual train ride home from the pride, rainbow-colored clothing and glitter and family surrounding me as I scrolled through my phone. I clicked onto Lila’s Instagram story. She was at pride, dancing and wearing the same six shades I was. One of her posts read, “Some of y’all at pride don’t know how to act.”

My immediate reaction was anger. We don’t know how to act! Was this space not good enough for her? Not a good enough place to party? Her views couldn’t have changed that much, she just wanted a piece of the pie queer people baked ourselves when no one else would feed us. When gay kids slept on the streets and murdered trans girls were forgotten and middle schoolers were accused of lesbianism in first period. She can’t attack a community and then benefit from its safe havens. It’s not fair.

A few months after pride, Lila posted on her Instagram speaking out against homophobia in her community. Looking at her public rejection of what she had been taught to believe for so long, I realized that I needed to acknowledge that people can change. At the time of her post, I was drafting an article about homophobia in public schools and lower income communities. I reached out to her for an interview to see if she would be open to talking about her mindset in middle school and what had changed since then. She agreed and I was astonished at the openness from a girl who I had considered to be completely closed off to the unknown. The interview never ended up happening, but that interaction garnered my respect for her and the changes she had made in her outlook.

The students of my K-8 school entered from all directions. I grew up upper-middle class, white, with parents who loved me and taught me acceptance; I was cushioned. Other students grew up in families that didn’t talk about social issues or people who were different from them because they didn’t have time to do so or they didn’t know the words. Some students grew up in very religious households, with the idea that homosexuality wasn’t okay and the fear of how they would be percieved if they explored a different point of view. We could find solidarity in sharing snacks and torturing substitute teachers, but we did not live similar lives.

Access to education about gay people is, unfortunately, not universal. We did not learn what it meant to be gay in our public school curriculum. The afterschool program that taught me so much about inclusivity was not cheap; not everyone could stay on campus and watch a 50-year-old butch queen sing “Hit Me With Your Best Shot.” Kids are not given equal access to moral ideas. The people you grow up around are your teachers.

In middle school I felt a deep frustration and hopelessness after those debates about the morality of queerness. I felt like we were going nowhere, none of us were interested in learning from each other. But even if I might not have gotten through to them, those conversations did give me some insight. The girls talked about their God and their parents and their fear. They explained what made them see things the way they did. I didn’t agree with those sentiments, I never will, but I realized that this hate does not come from nowhere. And when Lila responded so openly to an interview those few years after, she taught me that those mindsets aren’t set in stone. That growth is possible.

The way that I look at ignorance has shifted completely from that morning of seventh grade, from that ride from pride, from the anger that always poured out of me when someone didn’t understand something so clear to me. I now try to understand why people are how they are and what pushed them there. I try to forgive. If a child is taught by their parents that something is gross and immoral, and no one provides a correction to that mindset, you cannot expect that child to magically understand that thing on their own. I do not know what it is like to grow up in unrelenting ignorance. I have never had to transform my worldview against the opinions of those who I hold closest to me. For that, I could not remain angry. It wouldn’t help anyone.

*All people mentioned are referred to under pseudonyms