Chinese and I, connected 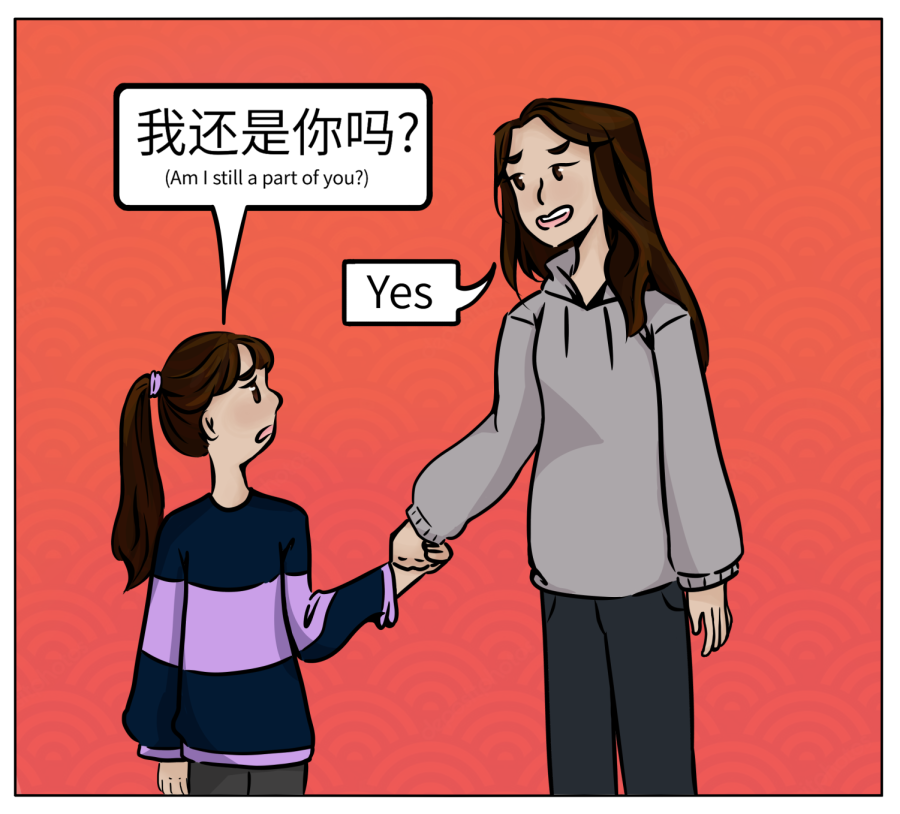 Heart racing, I turned to the laptop in front of me that read ADVANCED PLACEMENT CHINESE LANGUAGE AND CULTURE EXAM. The clock ticked in front of me as the cold wind swept through the gym and sweat collected on my palms. Monotone words played in the background, but all I could think about was how my hand was shaking from the built up anxiety. All of my learning had been leading up to one moment, this moment. Then another thought popped into my head: Where would my Chinese language journey be after this? What would happen?

The future was feeling foreign and filled with so much uncertainty.

Over a span of 11 years, I studied Chinese in school and it had been a fixed part of my education. The Chinese language not only affected my schooling, but my daily life, and eventually it became second nature to me. I began to depend on the constant of always taking a Chinese class. This dependency never revealed itself as apparent until this year, when I stopped taking Chinese.

Ever since I could remember, I have been learning Chinese. I attended Alice Fong Yu Alternative School, a Kindergarten through eighth grade Chinese Immersion school in San Francisco, where I learned Cantonese throughout all nine of those years. I also added Mandarin studies in middle school, and continued through my sophomore year of high school.

Learning Chinese from such a young age exposed me to a whole new environment surrounding Chinese culture which contrasted the environment at home. My family spoke to each other in English, despite being fluent in Cantonese, but at school, Chinese was part of every moment. Once at school my brain flipped and I processed all things in the Chinese language. Not only did we constantly speak Chinese in the classroom, we had math classes taught in Chinese, delivered speeches in Chinese, attended weekly Chinese library time, had Chinese Cultural festivals, and even would communicate in Chinese on sports teams to discuss plays without the opposing team knowing. By the time I was in third grade, I became so immersed in the language that sometimes I would pause when speaking English, and get stuck with only the Chinese phrase instead.

As I grew older, deeper reasons as to the importance of why I learned Chinese started to present themselves. It wasn’t just a tool so that my basketball team could deceive the other team to our advantage. The language connected me back to my culture and my Chinese roots, all while being able to communicate with older generations. Chinese allowed me to feel connected to a part of a culture that I once felt distant from.

Every year, the Alice Fong Yu eighth grade class would go on a Cultural Exchange Program trip to China. Although this opportunity sounded great, I initially did not want to go on the trip because I feared the uncomfortable awkwardness of the language barrier. My Chinese was limited, just as my host family’s English would be. This fear overwhelmed me as thoughts about not being able to sleep at night or not liking the food they made took control. Despite these doubts, I decided to go. When I first met my host family, they were very welcoming. In the beginning, we struggled with communicating, using faulty translation apps that usually couldn’t give an accurate translation. However, I slowly became more and more comfortable as the week proceeded and tried to engage in conversation when I could. Near the end of my stay, my host family taught me how to make dumplings. We gathered around the dining table with flour coating our hands as we scooped filling into dumpling skins, pinching and folding the edges. They shared how this was a family tradition and talked about other cultural customs that were a part of everyday life. Including me in an important tradition gave me a new sense of what Chinese culture looked like and a fulfilled feeling of my identity. Conversing with my host family gave the language I had learned for nine years a purpose as I now hoped to hold on to the cultural connection I felt in Xian.

At Lowell, in my freshman year, I tested into Chinese 3 Honors and continued my study of Mandarin, but the school itself was so different. After being acclimated to Alice Fong Yu’s average of 66 students per grade, Lowell, with over 600 students per grade, was a tough transition. Despite all the unfamiliarity in my new high school, my Chinese language class felt familiar. Something about learning the same topic created comfort, and with time, allowed me to absorb the new, and exceptionally larger, school.

In sophomore year, throughout distance learning, I kept the continuity of my Chinese education and took Advanced Placement Chinese. During distance learning, we heard the word “unprecedented” about a dozen times a day. Very few things felt certain, which was stressful and terrifying, but my Chinese class was a welcome continuity. Being able to attend Zoom classes and do assignments in Chinese every day was something that never changed for over 10 years, allowing me to hold on to something that wouldn’t change in an environment that was constantly shifting.

As my AP Chinese course came to a close, I wasn’t sure what to expect for the future. I was beginning to lose something in my education that I had depended on. Not only that, I was losing something that I felt was a part of me and my very identity. All of a sudden, I was staring at the AP Chinese exam screen, realizing I wouldn’t be taking Chinese the following year. The thought of not taking Chinese anymore had crossed my mind once or twice during the year prior, but it always felt so far away. When the time came, I didn’t expect it. I remember pulling up my schedule on Synergy in preparation for my junior year, and sensing a significant absence when it was not there. I knew that this was inevitable, But I still was unwilling to let it go. I knew there were other ways to further my Chinese education, such as college classes. However, this would just be running from a dilemma rather than facing it. Sooner or later, I would end my Chinese education in a classroom. I knew that the comfort and connection to culture, if I were to prolong my Chinese education, would be even harder to detach from. I knew this wasn’t sustainable and there had to be a better solution.

It wasn’t until I started to think about my Chinese education journey and write down my thoughts for this column, that I realized the experiences were not just attached to the Chinese language but rather, to me. The continuity of the classes wasn’t necessary if I had absorbed years of knowledge over the course of the past 11 years. I didn’t need a class as a bridge between me and Chinese culture. A bridge wasn’t necessary because Chinese culture already became a part of me.

I came to accept the nearing end of my Chinese education and started to look at the opportunities that laid ahead. My language skills were applicable in my life, whether that be communicating with grandparents, being able to order in Chinese at restaurants, or using it to communicate with Chinese-speaking families in the workplace. During the summer of 2019, I worked at North Beach Swimming Pool, where many people who came to swim were very limited in their English. I was able to utilize my language skills to communicate with parents and teach younger children to swim. Speaking Chinese at the pool brought me back to the years studying it in the classroom. At the pool, speaking with families, I realized that Chinese would forever be a part of me and that ending my Chinese education did not mean my identity would change.

I am so fortunate that I had the opportunity to learn Chinese at such a young age and even more fortunate that I was able to continue my study throughout my educational career. All these years of growing and learning, and my realization in Xian, led me to develop assets I would be able to use daily and gain unique cultural experiences. Remembering to reflect and treasure it allows me to reminisce on all those years of learning. To know that I have a deeply rooted connection to my culture, brings about a greater comfort than a language class ever could. I know that my journey with the Chinese language will forever be a part of me.