Learning to embrace failure and drive forward with determination 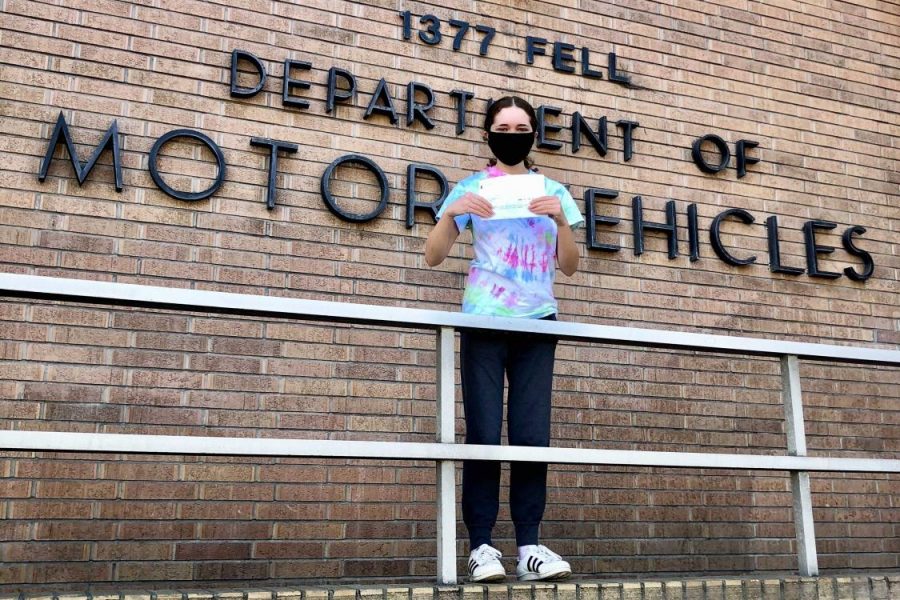 When I arrived in Corte Madera on the day of my driving test, I was already a little bit anxious. Once the masked examiner had covered my passenger’s seat with plastic, and I had successfully demonstrated my knowledge of the controls and hand signals to him, we took off. However, I still hadn’t shaken off this feeling of apprehension. Then at one point during the test, my anxiety really manifested. I panicked and ignored my better instincts which led to me making a critical error.

And, I failed automatically.

I have always been a perfectionist, and failure is a word that I have often tried — unsuccessfully  — to remove from my vocabulary. Failing my first behind-the-wheel test was definitely a blow to my pride, and it made me feel incompetent. However, it also forced me to learn from the experience and try again.

Starting from a young age, I’ve always tried to do everything perfectly. I loved to draw as a small child. However, every time I made a mistake, no matter how minor, I would scrap the entire drawing in frustration, throw it in the recycling bin, and start all over again. The piles upon piles of discarded drawings became the earliest indications of my perfectionist tendencies, and my inability to accept the imperfect markings on my paper became the first sign of my inability to accept failure as a natural part of life.

Dealing with failure is something that I have struggled with for years. During one soccer game about two years ago, my team was down several points. It was the second half, and I had been benched for almost the entire game. The clock was ticking; I was desperate to get onto the field. When my coach finally decided to put me in, I sprinted onto the field and got into position. When one of my teammates finally passed me the ball, I trapped it and proceeded to dribble up the field towards the opposing team’s goal. But my moment of opportunity only lasted a few seconds before the ball was stolen from me. When the opposing team scored, I was frustrated. I couldn’t even hope for another chance to prove myself on the field because, right after, the referee’s whistle blew, and I was pulled from the game. My heart sank as I took my seat again. My team lost that game, and it stung. I felt like a failure in the eyes of my coach and my teammates, as well as my own. From then on, as I became fearful of letting my team down, I began to place an immense amount of pressure on myself during soccer games. I felt like an imposter, and I remained on the bench for most of the season.

Then, when I turned 16, I decided to take on the challenge of learning how to drive, since I had always dreamed of getting my driver’s license as soon as I was eligible. Like most teenagers, I longed for independence and the freedom to be able to go wherever I pleased. However, with the COVID-19 pandemic hitting in the middle of my driving lessons that I had started in October of 2019, I wasn’t able to continue taking them for months. Despite this setback, I was still determined to accomplish my goal of earning my license. Still, learning never came easy, and I struggled to accept the fact that I would inevitably make many mistakes.

At that time, I didn’t have a lot of confidence in my driving abilities, and being a new driver felt like a huge responsibility. In addition to all the knowledge I needed to gather, there was the immense amount of situational awareness I needed to acquire in order to avoid getting into a car accident. When I first started, I was terrified of driving on the freeway, and I often drove much slower than the speed limit. It all felt an overwhelming challenge; I didn’t think that I would ever be comfortable behind the wheel. Despite my timidness, learning to drive was also an exciting time for me, and I was eager to pass my test and earn my license.

After almost a year of driving, I had racked up enough hours to register for the behind-the-wheel test — the one I failed. At one point, I was in a lane that was right-turn-only, but at the last minute, the examiner instructed me to go straight. My options were to change lanes and continue going straight or to turn right. I couldn’t react quickly enough. Panicking, I ignored my better instincts and simply went straight — from the right-turn-only lane, which is illegal.

After failing, I felt incredibly defeated and incompetent, worthless even. Once again, I felt like an imposter. But I also felt stressed: I only had about three weeks to retake the test before my permit expired.

For my second attempt, I promised myself that I would not make the same mistake again. This time I needed to listen to my instincts and trust myself.

I pulled up to the San Francisco DMV in my dad’s red Nissan Juke and looked around anxiously. I tried my best to calm my nerves and assure myself that I knew what I was doing, reflecting on the fact that I’d been driving well the past few weeks. Fortunately, that sense of positivity continued once I was behind the wheel. I drove more confidently, made no critical errors, and passed. When I entered the building to retrieve my temporary paper license, I smiled as a group of DMV employees cheered me on. At that moment, it felt as if a weight had been lifted off of me.

Like my driving test, I had approached the artwork that I strove to make as a child with the intention of doing everything perfectly. However, this was an unattainable goal. I had to learn to embrace the imperfect markings on my paper. And eventually, I learned how to utilize those mistakes to make a new drawing that was different from what I had originally intended but was still beautiful nonetheless. Learning does not need to be an impatient, uncomfortable process filled with self-criticism. The huge sigh of relief I felt after I finally earned my driver’s license didn’t have to be the only milestone moment where I felt accomplished. Instead, I could have taken it slow and celebrated the small wins, such as earning my learner’s permit, as opposed to focusing solely on that perfect, ideal end goal. Although I still set high expectations for myself, I no longer feel as bad about failing. I now realize that it’s just part of the process.