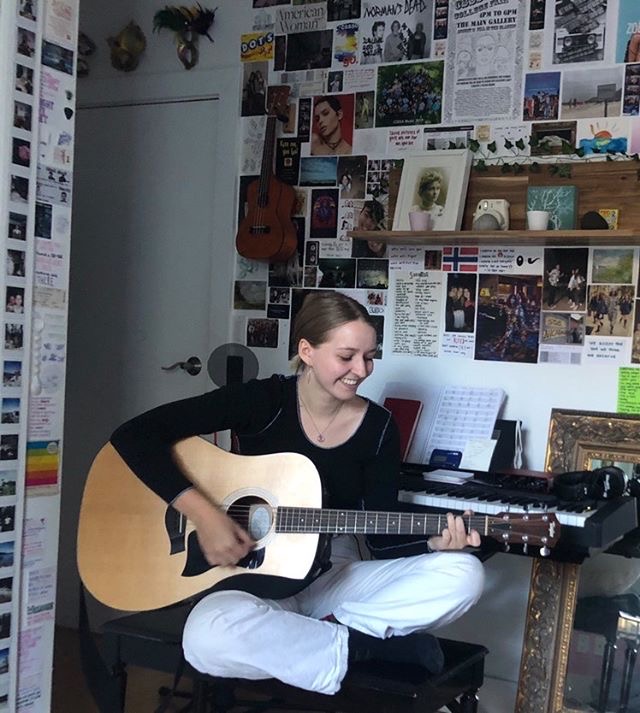 Always a fan of music, senior Martine Kolderup-Lane started writing songs in middle school. She is now an avid songwriter, incorporating the guitar, ukulele, and piano into her songs. Kolderup-Lane uses songwriting to express herself, and often performs her music for her friends at “art parties.”

What inspired you to start writing songs?

I’ve always loved singing and songs, and I always wanted to be that girl that wrote songs. It sounds so cheesy, but all my favorite movies were about music and there was always that one girl that said, “I write songs,” and she carried around her songwriting notebook. And I was always like, It would be so cool to not be singing someone else’s songs.

How did you get into songwriting?

My singing teacher is probably one of my favorite adults in the entire world, and she writes songs. She was always like, “You could write a song at some point.” She led these songwriting workshops with the studio I went to, so the summer after seventh grade, she was like, “You should do this.” I had this idea for a song called “Cecilia,” which is my middle name. She’s a patron saint of music, who I was named after. So I basically wrote this song for a girl I wished I would be when I was 13. And so I just wrote it that week. And that was the only song I’d written until April, the next year, or May. And then I wrote one other song in eighth grade, and that was about it.

Then high school started, and I couldn’t stop. Every week, there’d be one or two new songs that I was cranking out, and I was so excited that there was just this never-ending flow of inspiration and stuff I was doing, and I was so proud of each new song. But looking back on it, they’re not necessarily songs I would showcase anymore. I still have that where I write a song and I’m like, This is the best thing I’ve ever written. And I’m sure a few months from now or a year, I’ll look back on it and be like, this song is not the best.

How has your song writing developed over time?

I think when I first started writing songs, I had this concept of what songs needed to be, and these rules of what songs were supposed to sound like, what they were supposed to be about. Like the verse, chorus, verse, bridge, chorus kind of idea and structure, and just kind of the rhyming patterns and how things needed to follow suit. But the thing I’ve come to understand is there aren’t actually any rules. There are some guidelines, kind of, but there aren’t any rules. And if there are rules, they’re always meant to be broken. Another thing that I think I was too focused on when I started writing — which prevented me from being able to release this tension of inspiration inside of me — I was trying to write songs for other people to hear. I was writing them so that I could be like, “Hey, I wrote a song,” and play it for them and then they would hopefully be like, “That was so good, Martine.” And I’ve come to realize that that’s not what songwriting is about, songwriting is not supposed to impress people or necessarily be for other people. For me, it’s definitely for myself. Most of the songs I write are for myself, to understand things that are happening in my life and understand thoughts that I have. And then it’s up to me whether or not I want to share that with people.

Is there a song you’re particularly proud of right now?

It’s really hard to choose. I think one of the all-time favorites for me is one I wrote over winter break in freshman year, and it tends to be a favorite among all my friends. It was written about a friend who I was really close with at the time, and I’m still fairly close with them. But I’ve kind of realized that over time, it’s become a song about all my friends, and kind of just a way for me to look back on high school and all the things that I love. It’s called “Thoughts of Adolescence.” It’s all about this friend, and just about who they are and their characteristics and different things. I play it every time my friends and I have art parties. I’ve realized the song is a way for me to remember special moments and nights of all my friends throughout high school and it’s kind of shaped me and I’ve kind of grown with it, and the idea of that song has grown.

How does your songwriting process work?

It kind of changes. I’ll be in the shower, I’ll be walking outside, I’ll be in class, I’ll be about to go to sleep and I just kind of sing to myself throughout the day. And I’ll be like, Oh, wait, I actually really like that melody. Oh, wait, that’s a cool line about a thing that’s going on in my head. I really hate it if it’s not an appropriate time for me to take my phone out, because if I can I’ll open my notes, and I’ll just kind of start singing into my phone until I find something I like. Or I’ll write a line in my songwriting notebook. If I’m thankfully at home when it happens, I will run over to my little bench where I have my little hub of music stuff and I’ll grab my guitar or I’ll grab my ukulele or I’ll sit on the piano, and I’ll start messing with some chords. And hopefully, if it’s a good idea, it’ll turn into a song in 30 minutes. Sometimes I’ll write a few verses and never look at it again. But usually what happens to me is I’ll sit there and a song will happen. Just automatically. But lately, my singing teacher — because I want to pursue songwriting in college — she’s been having me sit there and focus on the outline of a song, like what I’m trying to say in each bit, so it’s more clear to a listener. So, songs have been taking me like a month lately to get through because the idea just can’t leave my head, I need to finish it.

What are your songwriting goals?

My whole life, I’ve definitely wanted to be a performer. I feel like I definitely have always wanted to sit on a stage, and I’ve always loved being on a stage, especially doing my own songs. I sing for the Jazz Band at Lowell and I’ve never been as nervous as I was doing Jazz Band last year, and having to sing jazz songs on stage. I was freaking terrified because I’ve had some trouble keeping rhythm. And I’m working on it, but it’s really hard with jazz for me. But then we had Jazz Pops, and our teacher let us audition with whatever we wanted to show. So [my friend] Annie and I did one of my originals. She was like, “Do you want to do an original?” Like I would love to, and I’d just written this heart-wrenching ballad. I did not do well in the jazz song I had to do that night, but I was so comfortable doing my song. I have such a comfort when I’m singing my songs on a stage. That truly is the dream. But dreams don’t always come true. So, another interest I have is writing songs for other people as a ghost writer. Or I’m kind of interested in being a songwriting teacher for young kids like my singing teacher. Lately, I’ve been working with Women’s Audio Mission and I’ve been taking classes with them. Most of the students are in middle school, or younger, and so I just find it really nice to talk with these kids, and I see them starting to learn from where I was a few years ago. I really want to perform my songs if I could and release my music, but I also love the concept of teaching people something that I’ve grown to love so that I can introduce that thing that I have found so much happiness and peace doing to other people. I also love music history, so focusing on music history with songwriting in some kind of teaching form has, as of late, been a big appeal to me.