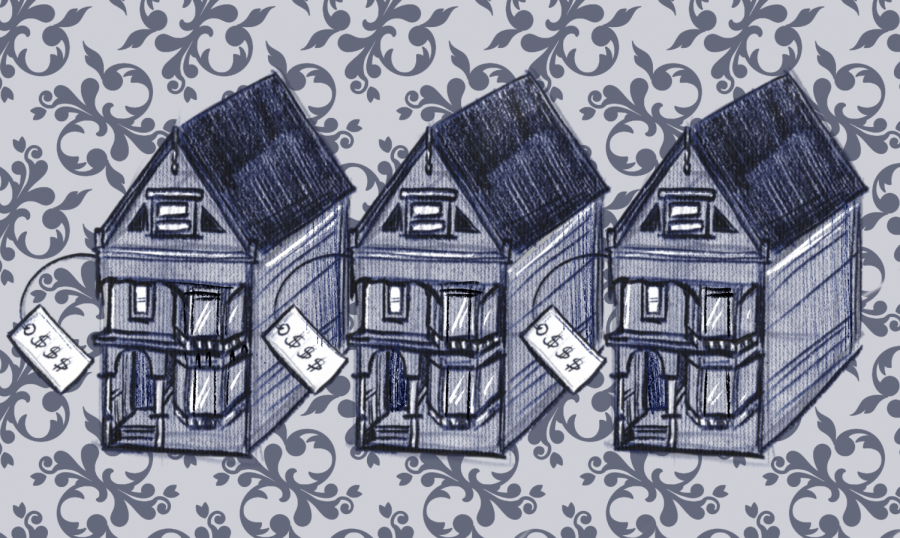 Mary’s mind races as she processes what her parents have just told her. Both of them have been laid off from their jobs. Questions come rushing to her mind. “What does this mean for my family? How can I support my parents? Should I let my friends know about what’s going on with my household?”

Mary, a sophomore using a pseudonym, is a Lowellite whose family has been struggling with financial hardships because of COVID-19 since March of 2020. Because her family had difficulty finding jobs, they have months of unpaid rent that they are struggling to pay.

Throughout over a year of family financial struggles, Mary has mostly gone through her experiences alone. She was reluctant to tell her friends about her experience because she feared becoming a burden to them. “There was nothing to be ashamed of but it was hard to tell them,” she said. “I knew they would try to help me but I didn’t want them to worry about me too much.” She has opened up to a couple friends about her family’s financial situation but it is still a difficult topic for her to discuss.

COVID-19 hit Mary’s parents with a new worrisome reality when the restaurant they worked at closed and they both lost their jobs. They then struggled to find employment for months, only finding jobs that didn’t work with their schedules. It was especially important for Mary’s mother to find a job with suitable working hours because she needed to watch over Mary’s fourth grade brother during distance learning. If Mary’s brother did return to the classroom, Mary’s mother then would have to drive him to and from school, preventing her from working early in the mornings or late in the afternoon. Mary’s father also could not find a job with manageable times. “They were mostly really late hours or really early shifts so he couldn’t accept any of them because it was too much for him,” Mary said.

After her parents lost their jobs, Mary’s home life began to see immediate changes. Mary’s parents didn’t receive unemployment benefits because they are undocumented, so they began to save as much money as they could, and only paid for necessities. In addition to only purchasing essential items and cutting back Mary’s allowance, they also decided to stop paying for internet and television services. With no internet service, Mary had to obtain a hotspot from the San Francisco Unified School District to participate in distance learning.

It wasn’t until five months later, in August, that Mary’s father found an entry-level job at a grocery store. Though her father’s job provided a source of income to keep her family afloat, Mary worried about their financial situation because her mother still wasn’t employed. Also at the time, Mary had feared her father could have become unemployed again if COVID-19 cases in San Francisco increased to the point where the store her father works would have to reduce capacity, and fire workers in the process.

In an effort to ease the burden on her parents, Mary attempted to work a job to help pay for other necessities. In November, Mary obtained a paid internship through the Mayor’s Youth Employment and Education Program, where she mostly attended training sessions on career readiness. Although it wasn’t the highest paying internship, Mary says the money she made paid for items like groceries and school supplies, which allowed her parents to not have to worry about those needs and prioritize paying their rent. Unfortunately, she fell ill and had to undergo surgery, forcing her to quit her internship in December. While her surgery was covered by her family’s medical insurance and didn’t put another financial strain on them, Mary’s parents urged her to prioritize her health and drop her internship. Mary hasn’t worked another job since.

Because her household had no money coming in for months, Mary’s family fell behind on paying their rent. Her parents were already dipping into their pre-pandemic savings to help pay the rent for their one-bedroom apartment and losing their jobs further added to their challenges. Mary worries about whether her family will be able to pay back their months of debt. “It’s a race to catch up to what was before,” she said.

Since her family is struggling to pay rent, eviction is a concern for Mary. Currently, her family is protected from eviction under State Assembly Bill 3088 passed in August, which protects tenants who endured hardships because of COVID-19 between March and August 2020 from being evicted on the condition that they pay at least 25 percent of their rent. Mary’s family is able to pay more than the 25 percent threshold, but Mary is worried what the landlord may do when the moratorium expires on June 30th. Although this person’s landlord has been empathetic to their financial hardships, Mary still believes the landlord’s greatest priority is receiving their rent payments. “If later on, our landlord asks for all that money on the spot, it would be a struggle there,” she said.

While the moratorium is helpful, Mary would like to see the unpaid rent be canceled. The State Legislature has taken a step towards cancelling rents by passing Senate Bill 91 in January. The bill directs the state government to use federal funds to pay 80 percent of a tenant’s unpaid rent if landlords agree to forgive the other 20 percent of the remaining debt. If landlords don’t agree to the conditions, the state would still pay 25 percent of a tenant’s rent, ensuring they will at least be protected from eviction. Passing the bill would greatly help Mary’s parents pay back their rent and become financially stable again. “If we get help from the government, they would be able to catch up,” she said.

Besides hoping for government assistance, Mary’s family also tried to find other sources of financial aid. They tried to access rental assistance programs provided by the Mayor’s Office of Housing and Community Development and several religious organizations’ charities to gain some assistance paying their rent, but ultimately came away empty handed. Mary explained that when her parents tried to submit their applications, they were rejected due to the high number of applications those programs had already received.

With the hardships Mary and her family has endured in order to keep a roof over their head, she wonders whether she can continue to live in San Francisco. Mary would like to stay in the city, but says her ability to do so depends on if her parents are able to obtain better-paying jobs to replace the ones they lost. If they cannot, she believes her family will have to move out of San Francisco, something she doesn’t want to do. “So many people that I love and I’m really close to are in San Francisco and there are so many memories here,” Mary said. “It would be discouraging to have to move away to somewhere else when this is the place I grew up in.”

Mary says her experiences with economic hardship have shown her that she should be more grateful for the efforts of her parents to provide her a comfortable life. She hopes other students, especially those who haven’t been as impacted as harshly by the pandemic as she has, will open their eyes to economic disparities and acknowledge her experiences. “Thank the things you have; appreciate them,” Mary said. “You have to understand people are struggling.”