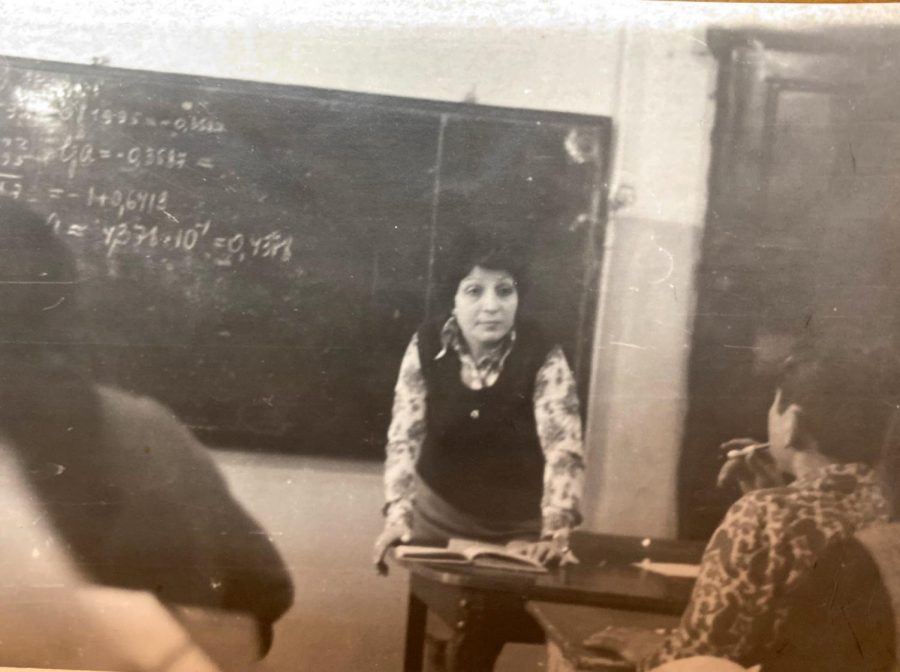 ALL PHOTOS COURTESY OF ALINA AYVAZIAN

Karapetyan teaching in her hometown of Baku, Azerbaijan.

Lyudmila Sergeyevna Karapetyan, a Lowell math instructor of more than 15 years, died on Dec. 27 2020, exactly one month away from her 76th birthday. Known for her compassion, tenacity, and unwavering passion for teaching, she had a strong presence within and beyond the Lowell community. Her uplifting spirit and good humor touched the lives of many she knew.

Karapetyan had been battling cancer for the past four and a half years, according to her niece, Alina Ayvazian. She succumbed to the illness close to her family in her home in Daly City. Karapetyan is survived by her two older sisters, Zhanetta and Gretta, two nieces including Ayvazian, a nephew, and Ayvazian’s daughter. Her funeral took place on Jan. 12 at the Skylawn Memorial Park in San Mateo, where a few family members attended in person; her students, colleagues and others attended via Zoom.

Karapetyan was a devoted teacher. At Lowell, she taught everything from algebra to precalculus, according to math department chair Karl Hoffman. Prior to the COVID-19 pandemic, she was also teaching a few nights per week at the City College of San Francisco. Karapetyan inspired her students with her strong enthusiasm and dedication. Lowell junior Eliana Brown recalled how she had been teaching through her illness for the entire fall semester, up until just a few days before she passed. “Seeing her work hard pushed me to work harder too,” Brown said after expressing her disbelief and admiration at this feat.

Karapetyan cared for her students equally as much as they were inspired by her, a relationship Hoffman described as a “two-way street.” When junior Sherry Zhou accidentally logged on to an optional Zoom class none of her classmates were attending, Karapetyan engaged her in conversation for at least 20 minutes. Karapetyan’s eagerness and genuine interest in checking in on her individually made a difference in the way Zhou saw her as a teacher. “The fact that she sat there every single time just in case someone needed help, even when usually no one comes, that really just shows her dedication to her students and her passion,” Zhou said.

Junior Rebecca Kang felt similarly, and commented on how Karapetyan’s zealous enthusiasm for questions and good sense of humor made her class a safe space. “She would always ask how everybody’s day was going,” Kang said. “She was always aware that this school was stressful and all the students in her class were stressed out, and she wouldn’t hesitate to make a joke when she could.”

Many of Karapeteyan’s students were aware that she was ill, but they did not know the specifics or the severity of her illness. She would be seen coughing, taking phone calls with her doctor, or occasionally allowing the class to pack up early so she could leave for an appointment. However, her students appreciated how she would always try to make learning as normal as possible for them; Karapetyan’s class remained a steady routine and the gravity of her condition was downplayed. Therefore, according to Brown, Zhou, Kang, and other members of the Lowell community, their initial reaction to her death notice was shock. “I think we all knew that [her death] was a possibility, but she never made it seem like that,” Kang said. “She was strong until the end.”

Karapeteyan’s notable persistence was pivotal during her battle with cancer. According to Ayvazian, she was diagnosed approximately four and a half years ago with stage 4 cancer right away. She began chemotherapy treatments that had debilitating effects on her body. “Her life expectancy at the time was 6 months, but due to the strength of her own Spirit and the constant care of her loving sister, she lived almost five years,” Ayvazian wrote in an email.

Remaining positive and accepting through challenges, Karapetyan was admired by both her students and colleagues for her continued dedication to teaching. Her additional position at CCSF stood out to Zhou. “She loved teaching so much that she didn’t just teach in the day, she went out of her way to try to teach as many people as possible and spread knowledge as much as possible,” she said. Hoffman recalled Karapetyan’s good cheer at Lowell, even though she was sick. “She took it in such great spirit,” he added. “Obviously nothing was going to stop her from teaching.”

Karapetyan was born on Jan. 27, 1945, in Baku, Azerbaijan, to Armenian parents, Sergey Karapetyan and Hasmik Khachatourian. She grew up with two older sisters and an adopted brother, who was her first cousin. Karapetyan was fascinated with the harmony within mathematics from a young age, and admired famous mathematicians, according to Ayvazian. Having always cherished freedom, she never married because she disliked the conservative social position of married women in Armenian culture at the time.

A few events drastically altered Karapetyan’s daily life in middle adulthood. The period from 1988 to 1989 saw the beginning of a wave of Armenian persecutions in Azerbaijan, due to the imminent collapse of the Soviet Union and the First Nagorno-Karabakh conflict. Karapetyan worked until it was too dangerous to leave her home. She, along with her middle sister, Zhanetta, and niece, Ayvazian, fled to Moscow where they had relatives who were able to house them for a time. However, without enough money for permanent shelter, emigration became their only option.

In the United States, Karapetyan worked through the language barrier and other obstacles to rebuild routine into her life. Arriving in San Francisco on Sept. 17, 1992, she, Zhanetta, and Ayvazian lived together for about seven years in a one-bedroom apartment. Night after night, Karapetyan and her sister would stay up drinking cups of coffee and studying English textbooks. About six months after arrival, she had learned enough English to begin working for a children’s center. After having her university documents translated and certified in the U.S., she received the American Master’s in Science degree. Karapetyan began working at the City College of San Francisco in 1994 or 1995, part-time, and simultaneously taught at John O’Connell High School. Her career at Lowell High School began in the fall of 2005, according to Tom Chambers, the math department head at the time.

Karapetyan had a one-of-a-kind presence at Lowell. To Zhou, she stood out with regard to her teaching style. Traditionally oriented, Karapetyan used limited technology, emphasized lecture rather than group work, and didn’t use whiteboards like most other teachers did. “She wrote on her little plastic sheets, which was her thing I guess,” Zhou said. “She was just Ms. K. There’s no other teacher that was the same as her.”

According to Hoffman, Karapetyan’s four decades of combined experience teaching in both Russia and the United States, college as well as high school, have helped develop the math department into how it is today. “She added her expertise and she had very good knowledge of the subject matter,” he said.

Karapetyan’s colleagues also fondly remember her by the unique “quirks” she possessed. In addition to their routine interactions early mornings in the math office, Hoffman reminisced on Karapetyan’s voice and laughter. He recalled her Christmas tradition of leaving foil-wrapped chocolate Santas on every desk in the math office. “She was just a great person to have around,” he said. Many teachers agreed that their department would never be the same.

With a constant in their lives taken away so suddenly, Karapetyan’s students expressed regret over the feelings they didn’t get the chance to convey. Realizing that students often take their teachers for granted, Brown told herself that she would turn her camera on for Karapetyan in the 2021 spring semester of distance learning. When she discovered, heartbroken, that she would never have the chance, Brown sent an email to Karapetyan. “I knew she wouldn’t be able to read it, but I thought it would be nice, you know, if the last email in her inbox was a thank you note thanking her for everything she did, and just sorry that I didn’t turn on my camera more or offer to be co-host more,” Brown said.

Brown wished that she could see her teacher once more. If given the chance, she would express her appreciation and let Karapetyan know that she misses her. However, Brown is grateful for the gaping absence in her life for one reason: “I’m glad she’s no longer in pain, because it was really hard to go to class everyday and hear her coughing the whole entire class time.”

In addition to her dedication to teaching, Karapetyan’s love for her students was obvious in her home as well as at school. According to Ayvazian, the usual setting at their house was Karapetyan grading homework at her table, and while she rarely spoke of herself, she often spoke of her students. “She took all of her students to heart; she knew their stories and often felt sorry or happy for them,” Ayvazian said. “She really opened her heart to her students and deeply wanted them to succeed.”