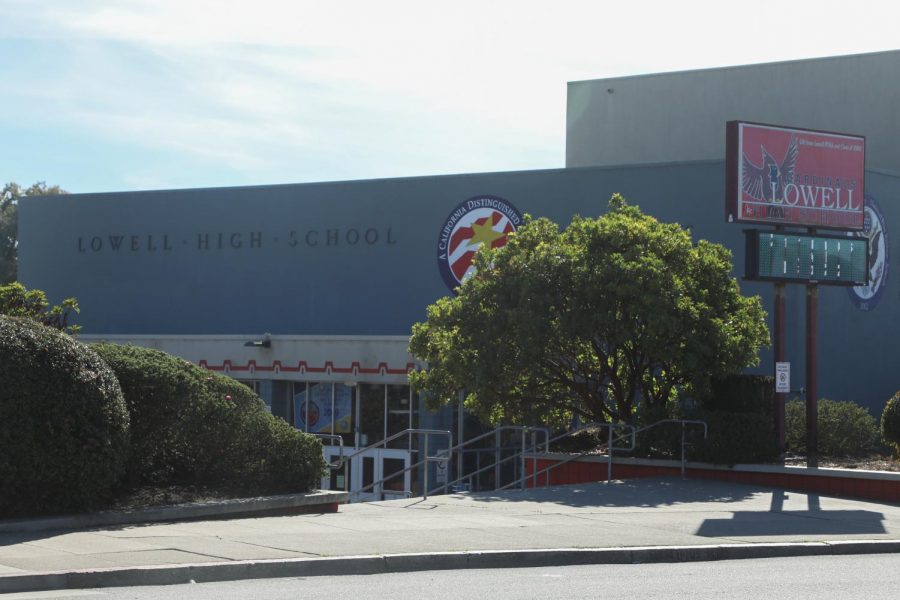 Lowell's potential renaming has divided the community, and the Board's announcement of an extended timeline to rename has not solved everything.

“If [the extension for submitting new names] means getting more engagement from the Lowell community, if it means getting the job done better, then I’m all for more time,” said junior Ella Shonk. “But I also feel that at a certain point it’s less about [getting the job] done well and it’s more about not being invested in it.”

As social conflict over racial oppression is brought to the forefront of politics in recent months, cities across America have begun renaming schools, streets, and memorials in an effort to undo the commemoration of white supremacists or those associated with slavery.

The work of the SFUSD School Names Advisory Committee pushing for the same changes locally has been put on hold.

In September, the committee selected 44 schools to rename themselves due to their namesakes being deemed to be racist or involved in the oppression of marginalized groups. Lowell, named after poet and abolitionist James Russell Lowell, was included due to the fact that James expressed anti-Black and white supremacist views, including looking down on freed slaves and sympathizing with Southern beliefs on slavery. Amidst pushback, however, all schools on the list will be reevaluated by the Board of Education (BOE) and the deadline for submission of replacement names has been extended from Dec. 18, 2020 to April 19.

Since the renaming proposal was announced by the School Names Advisory Committee, and approved by the Board, community opinion has been divided. Principals have been fighting for an extended timeline for renaming, there is worry that this will waste needed funds, and the committee’s historical analysis of current namesakes has been criticized. Even Mayor London Breed rebuked the decision to focus efforts on renaming when schools remain shuttered due to the pandemic. Within just the Lowell community there is division on the issue, from avid supporters who believe even more must be done to combat racism to harsh critics. In December, the 44 schools’ principals refused to submit new names due to the limited timeframe they were given — a push that ultimately led the Board to intervene and extend the deadline to submit new names. It is unclear if new action by the Board will amend the list and the committee does not want to stop their work. As these decisions and discussions continue, all sides of the issue remain devoted to their opinions.

The main concern of the principals who participated in this protest was the lack of time to adequately discuss the renaming with individual school communities. Principal Dacotah Swett feels the responsibility of renaming Lowell falls on the entire school, not just the principal or the BOE, and thus time is needed to involve the whole community in the decision. According to Board Resolution 7310, on naming facilities, the BOE has the power to name district schools and any names submitted by communities shall be considered.  The committee will also submit an alternative name. “What I don’t want to have happen is I don’t want to have the Board of Education give us a random name,” Swett said. The importance and weight of choosing a new name for Lowell is not missed by Swett. “If we’re going to take this job seriously then we need to do it well,” Swett said. “I don’t want to do this quickly and poorly. [The current] name has lasted for a hundred and fifty years so if we’re going to pick a new name, I want to pick a name we’re going to keep for the next hundred and fifty years.” These sentiments were expressed in a request sent to the Board in early October from the Principal’s Union to which the Board responded with the new extension, according to Swett.

The extension has largely satisfied community members primarily concerned with the tight timeline of the renaming, but the others are not as optimistic.

Many believe that the BOE-reviewed list of schools to be renamed will not change substantially and point out the financial burden of renaming 44 schools as reason for their continued opposition to the renaming endeavours. In a joint press release by the alumni boards from Lincoln, Lowell, Washington, Balboa, and Galileo, the estimated cost of renaming is $150,000 to $200,00 per school; a total of 9 million dollars if all 44 schools are renamed. These costs include everything from the need for new P.E. uniforms to installing new school signs. Payments included in renaming schools may exacerbate current financial issues due to the pandemic related recession and pre-existing funding problems. According to Meghan Wallance, SFUSD’s Chief Financial Officer, in the next two years the district already faces a 169 million dollar deficit.

Further costs would fall on students, a worrying factor for those students involved in school teams and clubs for which they would have to potentially buy hundreds of dollars worth of new gear. Sophomore Audrey Thacher, a member of Lowell’s Song team, supports renaming Lowell, but still worries about the financial impact it would have for her. If the school were renamed, Thacher would have to pay for a new Lowell Song uniform to replace her $445 worth of gear bearing the current name. She paid that sum out of pocket when she first joined the team and repurchasing all that gear would be too expensive for Thacher. “I don’t know if I’d have to quit the team because I can’t perform without the uniform,” she said. “I’m not trying to say that to sound selfish or anything because [we wouldn’t] want to represent someone like James, but I’m not denying that it wouldn’t be great for me.”

Besides worries about costs, Lowell’s place on the list remains a dividing topic. Shonk believes that Lowell should stay on the list to show that the Lowell community doesn’t support James’s racist ideas. With the context of recent Black Lives Matter protests, however, she doesn’t think renaming by itself goes far enough to support minority communities and is performative. “Even if we do change the name we have to make efforts to make systemic change,” Shonk said. If the extension can provide school communities the time to discuss this issue and lead to a better result, then Shonk supports it. However, she thinks any extension beyond the April deadline should be avoided as it would look bad for the school as if they do not care about renaming and the reasons behind it.

Junior Curtis Chen agrees that the likely renaming will be an insubstantial, performative way of addressing the issue of racism but disagrees with keeping Lowell on the list. “This seems more of a ploy to make [the district] seem like they’re for activism rather than actually doing activism,” he said. “This doesn’t really help people.” He feels that Lowell should not be renamed, but is pessimistic about the possibility of Lowell being removed from the list after review from the Board.  “[The Board] doesn’t seem to listen to the other people’s opinions,” he said. “They don’t seem to pay attention to any opinion other than their own.”

Students are not the only members of the community who question the impact renaming will have on the systemic issues of racism. John Trasviña, President of the Lowell Alumni Association is against renaming, and feels the Board and district need to primarily focus on achieving equal educational opportunity between all schools and students. This, he thinks, is the root problem the district needs to solve. “The question is, if we have a consensus in the city that academic excellence and equity are important, is the best use of 150,000 dollars changing the name or is the best use having a wellness counselor or other kinds of resources?” Trasviña said.

Trasviña also feels Lowell’s well-documented commitment to the abolitionist and anti-war movement should outweigh the sparse evidence of racism found by the committee. Besides being an abolitionist, his work and influence extended far beyond the constraints of his lifetime, according to Trasviña. James is referenced by name in a positive light in Martin Luther King Jr.’s “We Shall Overcome” speech. King’s combination of anti-war effort and civil rights protesting is also considered to be influenced by James, as James actively supported the anti-war and abolitionist movements simultaneously. Further, Lowell’s poem The Present Crisis, which spoke out against slavery, was also inspiration for the NAACP’s monthly magazine’s title “The Crisis.” “[James is] a giant figure that influenced civil rights and equality not only in the 1800s but in the 1900s, shaping Dr. Martin Luther King’s speeches and thought process,” Trasviña said. He finds that the possibility of removing James’s name from the school based on the committee’s reasoning is unjustified, treats him as synonymous with white supremacy, and completely dismisses the rest of Lowell’s work for equality. “The importance of James Russell Lowell is totally unknown and ignored by this [renaming] committee,” Trasviña said.

He attributes this to the absence of a historian on the committee and no corroboration for any evidence found. The committee’s original evidence to support renaming Lowell was directly lifted from Wikipedia, according to Trasviña, who witnessed the committee meetings and read the initial evidence presented. “In general there was very little historical analysis done on the names because [the committee] largely went to Wikipedia,” he said. The Wikipedia entry on James states: “[James’s] commitment to the antislavery cause wavered over the years, as did his opinion on African Americans.” These wavering opinions included looking down on freed slaves and, despite supporting the black suffrage movement, worrying about how their right to vote could change the then current status quo, according to Wikipedia. Research done by the Alumni Association has traced the evidence from the Wikipedia article on James back to a biography written after his death, but was unable to find the context for the incriminating quotes. Travsiña believes this and the full extent of Lowell’s abolitionist work need to be taken into consideration during the Board’s review process.

The committee doesn’t agree with the Alumni Association’s perspective of James as they consider him a known anti-Black white supremactist. Until the BOE makes the executive decision to keep Lowell on the list of schools to be renamed or not, the committee holds to their beliefs that Lowell’s record is inexcusable. “James Russell Lowell was a known white supemacist and espoused anti-Black rhetoric,” said Jeremiah Jeffries, facilitator of the School Renaming Advisory Council. “Oftentimes people like to make the excuse that he was simply a man of his time and he also supported the ending of slavery. Slavery and the desire to enslave people are not the only ways people are racist.” According to Jeffries, Lowell wrote, “We believe the white race, by their intellectual and traditional superiority, will retain sufficient ascendancy to prevent any serious mischief from the new order of things.” He finds this enough cause for the school to be renamed regardless of James’ abolitionist work and the time period in which he was living. “Though [James] was an abolitionist earlier in his life, he said he sympathized with Southerners and their viewpoint on slavery,” Jeffries said.

In the end, all of the parties can agree on one thing: no one wants to promote racism within the district in any way. The differing opinions come down to priorities and diverging ideas of what is considered upholding structural racism and what is not. Now, with the extended deadline, and the possibility that Lowell will not be renamed, the school will have more time to make this decision. Shonk thinks everyone involved needs to remember the reasons why this change is being prompted and how the school’s decision will impact its reputation. “Lowell has [an academic reputation] but if we’re not willing to learn about our namesake and we’re not willing to think about him critically then we don’t really deserve this reputation,” she said.