A deep dive into the eutrophication of Lake Merced 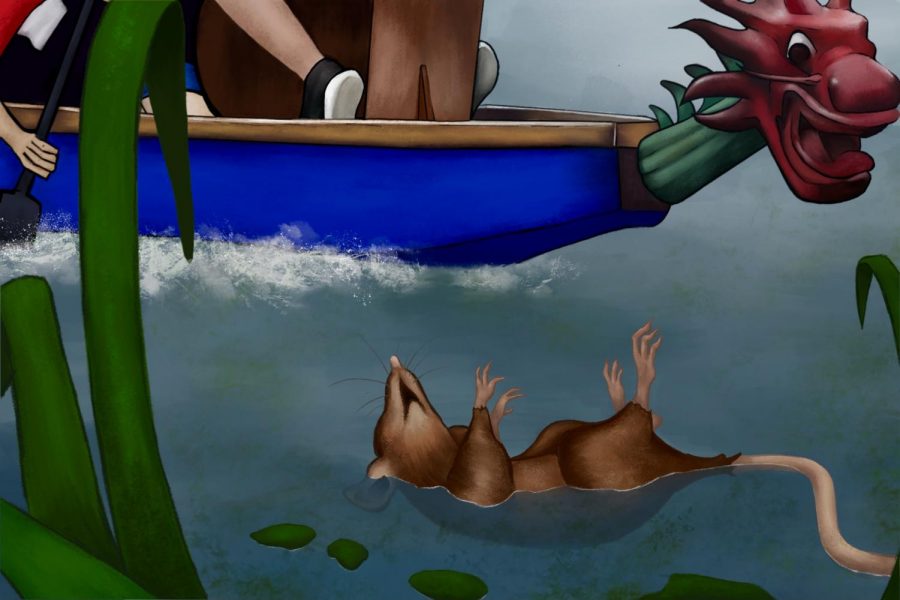 Preparing for dragon boat practice, senior Priti Lama begins paddling into the heart of Lake Merced, ignoring the usual stench emitting from the putrid lake. She’s become accustomed to it after practicing here every day for the last few years. As her eyes adjust to the glare of the water, they rest on a dead fish, floating an alarmingly short distance away from her. She cringes in disgust and paddles away in the opposite direction hoping to avoid physical contact.

Environmental problems took a local turn when the once beautiful and clear lake began the process of cultural eutrophication. Eutrophication happens when the excessive presence of nutrients in a body of water result in algae growth and depleted oxygen levels. Cultural eutrophication is eutrophication caused by human activity. Due to certain anthropogenic barriers and the addition of nutrients, Lake Merced is currently experiencing the consequences of cultural eutrophication, which has caused everything from the green appearance to the reduced biodiversity of the lake. Although not yet fully eutrophied, the process has started, affecting hundreds of Lowell students who, in a normal year, use the lake on a daily basis. If action is not taken soon, the damage caused could be nearly impossible to reverse.

According to AP Environmental Science teacher Katherine Melvin, the main factor contributing to the start of the eutrophication process is the fact that Lake Merced is surrounded by concrete streets and hard surfaces, causing its watershed to be reduced. A watershed is an area of land that drains water from all different sources into a main body of water. The process of constant adding and draining of water allows the water to be recycled. With a shrunken watershed, however, not enough “new” water is getting to the lake. This creates an abundance of issues, including the body of water becoming shallow and the lake’s nutrients and pollutants can’t get cycled out. The additional nutrients and pollutants contribute to the odor and the increasing number of dead animals in the lake.

The problems caused by the reduced watershed are only compounded by the fact that excess nutrients are getting into the lake from outside sources. In 2018, a water quality report was done for Lake Merced, in which the level of nutrients including phosphorus, nitrogen, lead, and ammonium were reported to have all noticeably increased in Lake Merced since 2009. This nutrient pollution is not cycled out of the lake because of its shrunken watershed and is causing the rapid development of algae in Lake Merced. This is because the nutrients act as fertilizer for the algae.

Algae growth not only destroys the clear beauty of the lake, causing the water to appear green in color, but also creates more serious issues. This algae growth causes a decrease in levels of dissolved oxygen, harming organisms that use Lake Merced as their habitat. Although algae produces oxygen, excess algal growth and eutrophication reduces the light that reaches algae and therefore reduces photosynthesis. As a result, the algae can’t produce enough oxygen to survive and eventually are decomposed by bacteria that further deplete oxygen levels, creating a positive feedback loop. The lack of oxygen makes it difficult for the animals living in the lake to survive. As more vulnerable species die, the food chain is thrown out of balance and the lake’s biodiversity decreases.

The source of the excess nutrients that are causing this harmful algae growth is debated. According to Melvin, the nutrients are likely getting into the lake in the form of fertilizers that the nearby golf courses use for the upkeep of their grass. The golf courses, however, have claimed that they are very conscious of avoiding putting fertilizer near the lake. If their claim is true, fertilizer must be getting into the lake from a distinct source.

Regardless of the exact source of the trouble, the effects of the eutrophication of Lake Merced are already affecting Lowell students. As a Lowell student who has spent four seasons practicing on Lake Merced for dragon boat, Lama has had more than a few experiences finding dead animals floating aimlessly on the surface. “One time I was paddling and there was a dead rat and we had to paddle off really quickly because it was terrifying,” said Lama. According to her, the amount of algae in Lake Merced is visibly unhealthy, and she recalls seeing a sign warning individuals that because of the increasing amount of algae, it was unhealthy to fish in Lake Merced and that certain parts of the lake should be avoided. She believes that Lake Merced is in very poor conditions and that, considering the large number of people who use it, it should be cared for more.

Senior Isabel Do, another Lowell student and former dragon boat athlete, used Lake Merced at least three times a week while on the dragon boat team and clearly remembers her experiences practicing on the polluted lake. “Because [dragon boat] is a water sport, you get the water all over your body,” said Do. “Your hands get wet, and when they dry they smell really gross, like sewage in a way. And if you don’t wash your clothes right afterwards, then they keep the smell after they dry and the smell sinks [in] for days.” She dislikes the odor that the lake emits, how green the water is, and overall how much pollution there is in the surroundings and in the lake.

Solutions are already being worked on to reverse the effects of eutrophication. Bubbling, a technique that has aerators pump oxygen into the lake, is being used in the southern part of Lake Merced to increase the amount of dissolved oxygen. Aerators were installed there and have caused that area of the lake to be clearer and have better biodiversity. According to Melvin, if these aerators were placed in more areas of the lake and more frequently, the amount of dissolved oxygen reaching organisms would increase dramatically, solving the biodiversity problems caused by eutrophication.

Melvin also has some ideas for taking out the root cause. She thinks barriers or walls around the golf courses could ensure that fertilizers don’t get into the lake and thus prevent excess nutrients causing uncontrolled algae growth. Additionally, diverting filtered sewer water back into the lake to give Lake Merced another water source besides the rain that collects into it, could solve the issue of the lake’s small watershed, according to Melvin. However, she believes this project will not happen because it would cost a huge amount of money.

Although Lake Merced continues to become eutrophied and drastic action has not yet been taken, experts in the eutrophication process like Melvin believe it is not too late to reverse the process. Executing projects to reverse the start of eutrophication would not be easy or cheap, but Melvin is optimistic that, if such methods or other solutions are implemented, we can at least begin to reverse the damage caused by human activity before Lake Merced is completely or irreversibly eutrophied. “Almost every school uses [the lake] and it needs to be fixed,” Lama said.