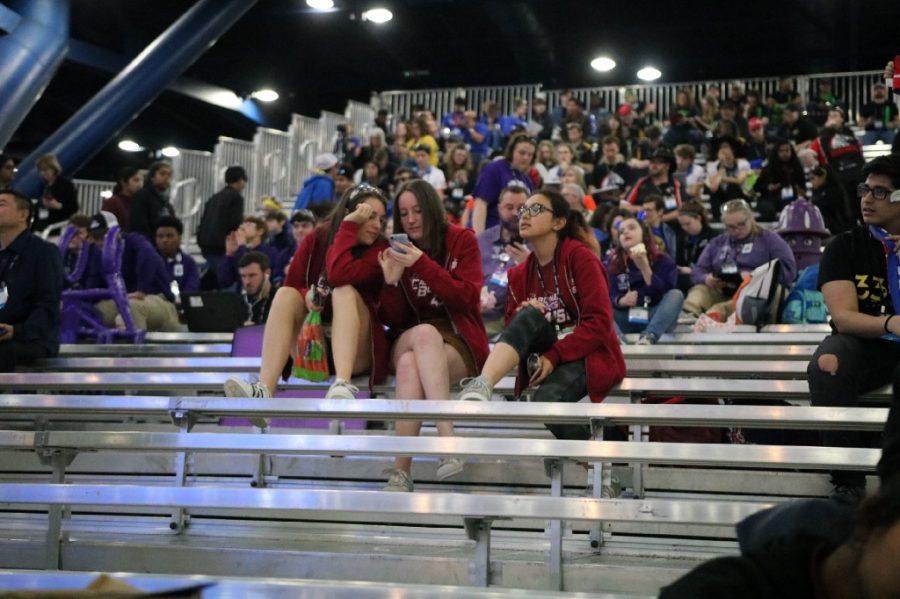 From left to right: Juniors Maya Terplan, Erne Mccabe and Elizabeth Karas anticipate the results of the FIRST Robotics Championship in Houston, Texas.

As a freshman in 2015, current junior Elizabeth Karas was hesitant to join Lowell’s student robotics team, the CardinalBotics, because she believed it was a largely male-dominated environment. Despite this initial feeling, she decided to go to the CardinalBotics informational meeting and ended up joining the team.

Like Karas, several other female CardinalBotics members had qualms about joining the team due to the lack of other females. Wanting to improve upon the situation, faculty advisor Bryan Cooley and members of the CardinalBotics have taken some positive steps over the last two years to increase the number of females on the team, as well as to address issues of gender bias.

Given that women currently hold less than 25 percent of STEM jobs in the United States, despite constituting 47 percent of the U.S. workforce, it is not surprising that Lowell’s CardinalBotics experienced a significant gender gap at its inception in 2011. With just 12 percent of the team female when the CardinalBotics began seven years ago, recruiting more girls to the team has always been a goal, according to junior Ben Lanir. However, the recruitment goal took a backseat in the team’s early years as it placed most of its focus on mastering the basic functional operations. With that feat accomplished, recruitment of girls has become a larger priority this year, says Lanir.

Junior Emma Blekinsop considers this stepped up recruitment of girls to be very good news. When she was a freshman in 2015, Blekinsop recalls the team being overwhelmingly male. “It was almost exclusively male members when I first joined,” she said. “Especially my freshman year, [the CardinalBotics] definitely had the ‘boy’s club’ atmosphere around it.”

As part of an effort by Cooley and members of the CardinalBotics to encourage girls to apply for the team, female members now often represent the team when demonstrating the robot at events. This strategy has proved successful, says Cooley, as it allows girls interested in joining the CardinalBotics to learn from current female team members and gives them the confidence and sense of belonging necessary to join the team. “We rely on the girls on the team who have had a positive experience,” Cooley said. “[We want to make] sure that [female members] spread the word to people who might follow in their footsteps.”

Cooley has also noticed that girls interested in joining the CardinalBotics can need an extra push to apply to the team. During the application review process, Cooley says that in cases where a female applicant and a male applicant are equally qualified to be on the team, the team will select the female candidate. “There is a slight bias toward girls because we want to provide the opportunity and it seems like girls need a little bit more encouragement than boys to just apply,” Cooley said. “We want to reward those girls that do apply.”
“Especially my freshman year, [the CardinalBotics] definitely had the ‘boy’s club’ atmosphere around it.”
Because of this concerted effort by Cooley and members of the CardinalBotics this past year to encourage girls to apply for the team, females now comprise 43 percent of the team, a 31 percent increase since the team’s first year, according to Cooley.

This year and last, the CardinalBotics has also been working to address the gender divide present in team assignments, according to Blekinsop. In the team’s earlier years, female members typically took on business/marketing roles, such as public relations and outreach, while male members dominated the technical roles, such as design and mechanics.

Blekinsop was disheartened to witness this divide in roles along gender lines when she joined the team in 2015. Blekinsop says she quickly became aware that she was one of the few females on the team working in a technical role, prompting her to feel as if she did not belong. “It did feel discouraging sometimes, kind of like I had to work a little bit harder, that I was standing out at first,” she said.

A contest organized by Cooley during the CardinalBotics’ 2017 “build season,” a time in which the team prepares for future competitions, brought more females to the technical side of the team. The contest took place within the CardinalBotics between rookie members and veteran members, so as to “double the experience” on the team, according to Cooley. “There were girls who were the lead designers of the rookie bot that now have lots of experience…and are now in a position to lead prototyping teams this year,” he said. “I think that we’re in a much better place this year because we did that.”

Karas echoes Cooley’s enthusiasm, noting that she has witnessed an improvement on the team in balancing the number of male and female members in technical and mechanical roles. “Last year’s rookies, out of all the years that I’ve seen, [consisted of] the [largest number] of girls on the mechanical side,” she said.
“I think that we’re in a much better place this year because we did that.”
This development has also been noticed and applauded by male students on the team, such as Lanir, who is happy to see an increasing number of females taking on technical roles. Lanir gives credit for the change to veteran female members on the CardinalBotics, who currently work in technical roles. He says these veteran female members act as exemplars and inspirations for the newer female members. “In terms of encouraging girls to join mechanical positions, I think a lot of that is a ‘snowball effect,’” Lanir said. “As more girls are in mechanical positions, more [rookie] girls want to join mechanical positions because it makes it clear that it’s not something to be intimidated about.”

The CardinalBotics has also worked to combat gender bias and stereotyping on the team by raising awareness among members about issues of unintentional gender stereotyping, according to Cooley.

One of the most common places for gender stereotyping and bias to occur on the CardinalBotics is in “the pit,” the area where the team repairs their robot during competitions. Cooley has noticed that the culture in the pit can be contentious, which makes the environment seem unwelcoming to female members. “Certainly, the culture in the pit…was very hostile,” Cooley said. “The boys on the team were somewhat used to a hostile working relationship and understood that it was just the stress of the moment. [The boys] treated each other with what would appear to outsiders as disrespect. That was not very welcoming to mixed genders and has lapsed with some of the members.”

Blekinsop, who currently works in a mechanical role on the CardinalBotics, has experienced the heated environment of the pit described by Cooley in the past. “Sometimes the environment in the pit would be sort of intense because people are busy working on important things, but that means they start to get hostile…[and] snappy,” Blekinsop said. “It wasn’t really a welcoming place to be.”
“It wasn’t really a welcoming place to be.”
Cooley has worked to make girls feel more comfortable working in the pit this year and last by explicitly stating the norms of behavior to CardinalBotics members, something he had not done in the past. Cooley also organized a panel of female professionals who work in science and engineering to talk exclusively to the female members of the CardinalBotics about the obstacles women face in STEM careers and how to overcome them.

While Blekinsop, Karas and other female members of the CardinalBotics refrain from openly addressing such conflicts during team meetings for fear of a backlash, junior Albert Ma, CardinalBotics Vice President of Public Relations and a three-year member of the team, says he is willing to facilitate and help address these conflicts. “If I was told why, what’s wrong, and what I could do to help the person, I would definitely try to intervene,” Ma said. Cooley echoes Ma’s point of view. “It’s hard to encourage people to actually address the conflict,” Cooley said. “The only way to make it better is to bring [conflicts] out in the open, but people don’t want to do that.”

Meanwhile, Blekinsop says she believes the key is perseverance among current females on the team, as well as continued recruitment of girls. “If there’s one takeaway from any of this discussion, I don’t want girls to read this and get discouraged,” she said. “I want girls to come join us, and help to fix the problem.”