Putting the ‘distance’ in distance learning: How teachers and students outside SF have taken on online schooling 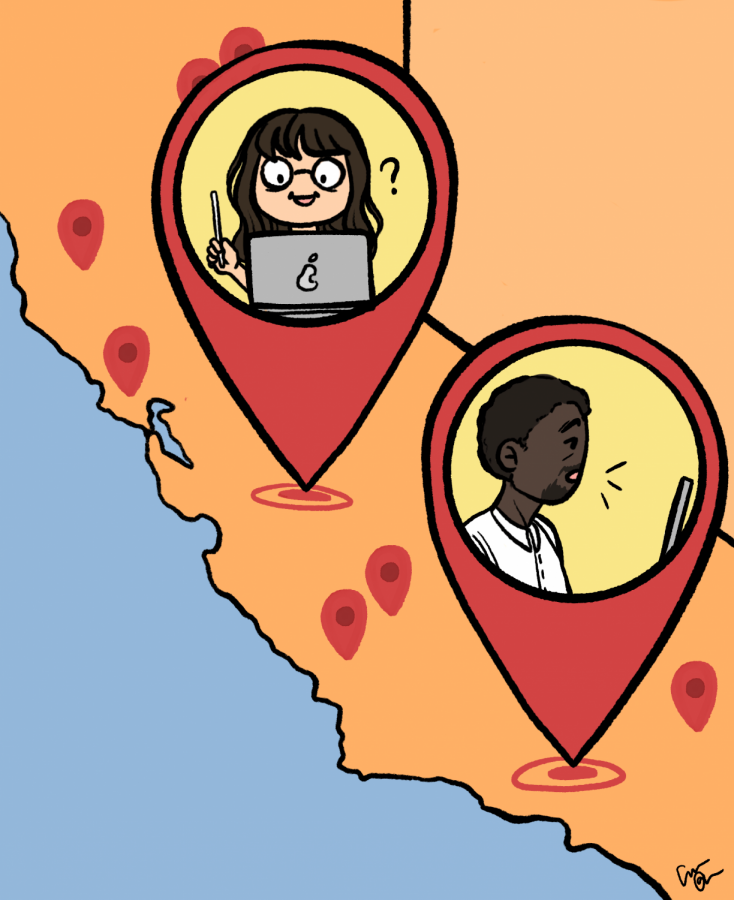 On March 5, 2020, Lowell’s classes were interrupted by an intercom message from principal Dacotah Swett sending them home due to a potential COVID-19 exposure. Shortly after Lowell locked down, the rest of the city followed suit. Since then, everyone has been adapting to a new way of life inside. While many students and staff have locked down in their homes here in San Francisco, a select few have escaped to new places.

Choir teacher Jason Chan has been teaching from San Diego, while senior Lilo Bergensten-Oliv has been attending class from a time zone nine hours ahead of San Francisco. Both are navigating being in a new place and figuring out how to both learn and teach over Zoom.

During the first grading period, Bergensten-Oliv tuned in to Zoom classes from her relatives’ home in rural Sweden. She wanted to see her family before winter brought too cold of a climate to socially distance outside with her elderly grandparents. Traveling to Sweden has been an annual tradition for Bergensten-Olive and her family.

Being nine hours ahead of San Francisco, Bergensten-Oliv starts her school day at 6 p.m. Central European Time (CET) and finishes at around 11:15 p.m. CET. While her peers were doing homework and enjoying their afternoons when Zoom classes ended, she was hurrying to bed. “In the beginning it wasn’t that bad, but after three or four weeks it started wearing on me,” she said. Though Bergensten-Oliv would normally go to bed shortly before 11:30 p.m., she yearned for an occasional early night. She would be so tired from Zoom classes that she would sleep in the next morning, rush to do all of her homework, then start the cycle over again—giving her limited time to spend with her family, which was the whole purpose of her travel.

In addition to school, Bergensten-Oliv also had to continue her responsibilities as a peer mentor. Every Wednesday after school she would check in with her reg teacher and scramble to facilitate discussions and activities for a class of freshman. “I ended up having to take a few days off [of school] towards the end of the trip to just have a normal sleeping schedule,” she said.

Not being in the same time zone as peers wasn’t the only strange experience Bergensten-Oliv had. Chapter 2, Article 8 of the Swedish constitution prohibits government shutdowns during peacetime. “All Swedish citizens shall also in other respects be guaranteed freedom of movement within the Realm and freedom to depart the Realm,” reads section 8 of the constitution. Due to the restrictions, Sweden has aimed to flatten their curve through voluntary social distancing and other lock down measures that are a far cry from the complete shut down San Francisco has implemented. “It was surreal to be somewhere that doesn’t have the same precautions as San Francisco,” Bergensten-Oliv said.

A little closer to the bay, choir teacher Jason Chan has found a temporary new home in San Diego, California. Chan has been with family and his dog in southern California for the past six months. He usually doesn’t get to see his family until long breaks, so when schools shut down he seized the opportunity. Unlike Bergensten-Oliv, Chan was wary of flying, so in April he packed up his car and made the nine-hour drive to San Diego. Despite missing his students, Chan has appreciated the time he has been able to spend with loved ones. “It’s good to see my family and be able to just see my dog all the time,” he said.

Distance learning has had a big learning curve for all classes, but it has posed unique barriers for Chan and his students. In normal class conditions, he is able to hear each student while they sing and teach the whole class directly, but on Zoom he can only hear a few students at once. Choir students have tried to keep the class as normal as they can, with Chan playing the piano and the students sticking to a rehearsal schedule. “I am just trusting that on the other side they are doing the work and singing what I am imagining,” he said.

If Lowell classes remain online through the spring semester, Chan is thinking about staying in San Diego for the rest of the school year. He hopes there can be some sort of hybrid learning schedule so he can see his students and be back in the classroom, but he knows that choir classes still wouldn’t be the same as they were pre-COVID-19.

Choir teachers around the country have been discussing the reality of singing classes in a hybrid learning environment, according to Chan. “It may actually not be good because we don’t want to get sick and we don’t want our students to get sick,” he said. In a normal classroom students can wear a mask while sitting and listening to the teacher talk, but in a choir classroom students have to sing and project—something that is difficult in a mask, not to mention dangerou. Chan fears that a return to Lowell would mean his students may not be able to do much singing in class. “We can do more on Zoom because at least whoever wants to sing is singing with me at home,” he said.

Oct. 21 at 11:50 a.m. correction: Previously an image caption was incorrectly attributed to Tom Chan, another Lowell teacher, instead of Jason Chan.