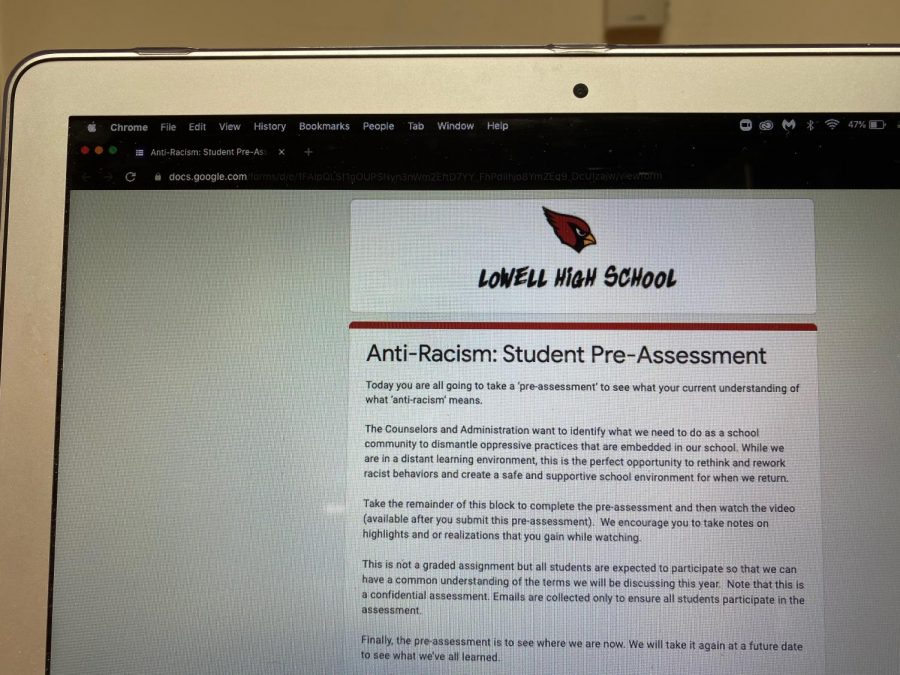 On September 11th students were asked to fill out an anti-racism pre-assessment during reg.

An anti-racism survey created by Lowell administration and community members received backlash on Twitter after screenshots of it were posted on the platform following an early release to some students on Sept. 8. The survey was officially released during registry Sept. 11 and will continue to be distributed to students on Monday.

Administration says that they are using the survey to gauge student knowledge on anti-racism, according to the form’s introductory message. The Coordinated Care Team, a newly formed equity committee composed of Lowell faculty and student representatives, created the survey. It requires submission through students’ SFUSD emails and is made up of five questions ranging from identifying the correct definition of structural racism to identifying an anti-racist statement.

The criticism came primarily from Twitter users unaffiliated with the school who were mostly concerned about the lack of anonymity and the possibility of students’ answers being noted and used against them in the future.

In an email sent to Lowell faculty Sept. 11, principal Dacotah Swett clarified the administration’s intentions. “The message which is currently being circulated on social media that Lowell is ‘mandating’ students take a survey regarding their views on race and racism for the purposes of ‘using it against them at a future date’ is erroneous in several critical aspects.” Swett goes on to explain that, while not anonymous in the interest of making sure all students are participating, the survey is confidential as only one administrator will have access to the responses. “We simply want to know if all students have completed their ‘lessons’ as we are also being held accountable for the fact that some students have posted racially insensitive messages and later claim that they ‘didn’t know’ that it was,” Swett wrote in an emailed statement to The Lowell. She also said that answers will not be “graded” and instead will be “examined as an aggregate” to gauge where the student body is at as a whole.

Peer Resources Coordinator Adee Horn believes that the survey is a necessary step for making Lowell a better place for minority students. “My understanding is that the district is committed to having anti-racist schools, and that [anti-racism] is a foundational value,” she said. “We’ve been told by students that they’ve had [negative] experiences because they’re not in the majority, and we want to make sure that school is a safe space for all.”

Students are divided over whether the survey was a good idea. Selena, who is using a pseudonym for privacy reasons, didn’t like that the survey seemed to be “pushing an agenda.” Selena believed that the questions were “leading” and that they were written to “clearly push you to make a certain choice.” Because of that, she thinks the survey may not convince students that they need to be anti-racist. “When a person perceives that you are trying to push an agenda or force something on to them, they tend to do the opposite,” she wrote. “[The survey] might cause people to move further right contrary to [the survey writers’] intentions.”

Selena also feels that because the survey collects email addresses it creates “social pressures and makes people answer what they think the faculty wants them to answer, instead of what they actually feel.”

Halcyon, who also wished to use a pseudonym, believes that the survey is neither good nor bad, but that administration needed to do something to address the current Black Lives Matter movement. “Say if the school didn’t send out a survey, didn’t say anything about what’s going on right now, they would get some backlash,” he said.

Junior Vishal Krishnaiah views the survey in a more positive light. Though confused by the lack of anonymity, he thinks that the assessment is “well intentioned,” and is important in developing teaching goals. “I don’t know how Lowell will go forward with this,” he said, “but I do think my peers for the most part are very eager to learn and at the least be willing to understand why it [anti-racist education] is important.”