Anti-Asian racism comes to light amidst a pandemic 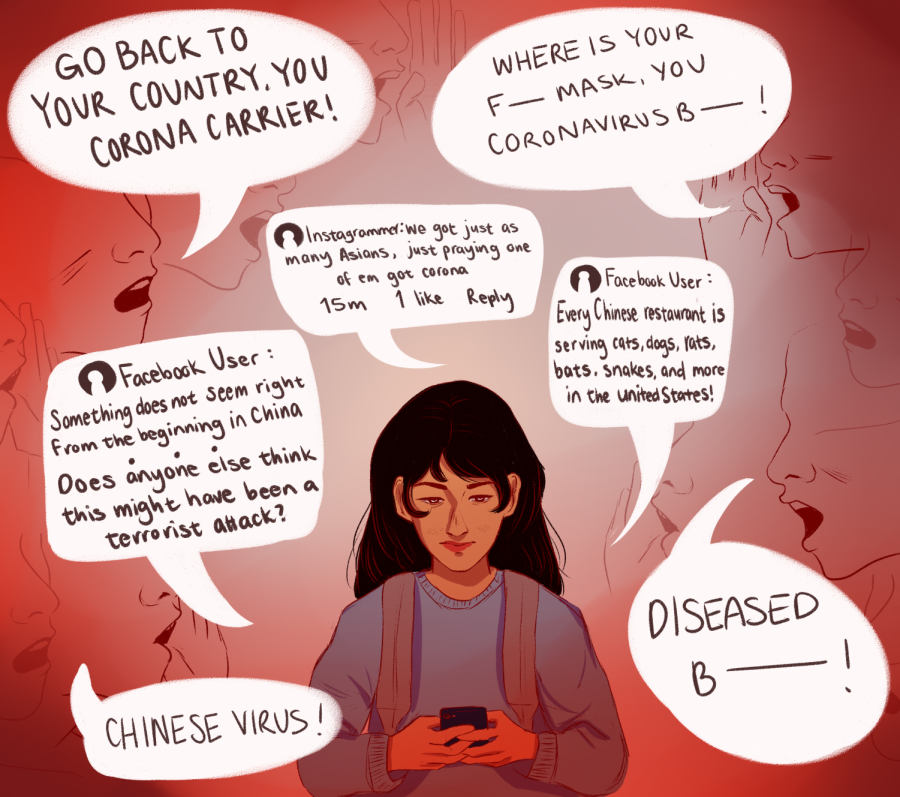 Tired after a long day out, Lowell junior Michelle Song checks the bus times on her phone, ready to head home. She quickly walks the streets of Downtown San Francisco, heading to her bus stop, only to be stopped dead in her tracks by a voice on the curb. “Go back to your country, you corona carrier!” a Caucasian man yells at her. Song, shocked but accustomed to hearing all sorts of things Downtown, brushes the comment off and hurries along her way. It’s not until later that she realizes the words left a mark. She’s not only offended, but scared.

Song isn’t alone in this experience. More and more Asian-Americans have had similar experiences in the past few months as the recent coronavirus outbreak has brought not only concern for health safety to the forefront, but also something else: anti-Asian racism.

Since the news of the novel coronavirus surfaced in American media in January, the disease has spread from the city of Wuhan, the capital of the Hubei province in China, to over 150 other countries. Because of the virus’ origins in China, Asians around the world have been the target of racist jokes and attacks both online and in person. The effects of this have become even more prevalent for Lowell’s majority Asian population after the initial closing of the school on March 5 due to a student coming into contact with a confirmed case. These effects furthermore call attention to a deeper problem of anti-Asian racism and violence.

Soon after the announcement of Lowell’s temporary closure, social media became a frenzy of different reactions. Various comments flooded Instagram and Facebook, and the surge of activity on Twitter made “Lowell High School” trending in San Francisco. While many social media users had caring and positive reactions, others had inappropriate and insensitive ones. Many high schoolers posted jokes under @thelowell and @sanfranciscoprobs on Instagram, the comments ranging from “corona time” to “bring the disease to my school.”

Others had more controversial comments. As some students began to debate the number of Asians attending Lowell as the reason behind the news, the comments evolved from insensitive jokes to borderline racism. One conversation under @thelowell’s comments section started with “please shut down Balboa too” and developed into “[Balboa] got just as many Asians, just praying one of em got corona.” Others were more straight to the point, saying “ching ching n*ggas.”

This same racism was even more prevalent among older generations in the comment section for a SFUSD press conference live-stream on the ABC7 News Facebook after Lowell’s closure. Several remarks from adults presented conspiracy theories about the Chinese government. “Something does not seem right from the beginning in China,” one Facebooker posted. “Does anyone think this might have been a terrorist attack?” Other comments were outright racist and misinformed. “Every Chinese restaurant [is] serving cats, dogs, rats, bats, snakes, and more in the United States!” a different Facebook user said, insinuating that all common Chinese people participate in the exotic wildlife animal trade, and that this was the root cause of the pandemic.

The sudden influx of inappropriate comments online prompted many Lowellites to push back and call for respect and sensitivity. “Stop with the racist remarks… a virus doesn’t discriminate,” junior Viviana Ojeda posted on her Instagram story. Others also took to their Instagram stories, spreading similar messages, Song among them. “The fact that [we] are all saying ‘stop these racist comments’ means that [we] recognize that there are a lot of them and… that some people are offended by them and don’t feel safe because of them,” Song said.

However, other students felt that many comments were just harmless, defending their views when others found them offensive. Their defenses ranged from “your inability to take a joke is beyond me” to “ok boomer ain’t nobody asked” when they were called out for their racist comments. These back and forth debates about what is appropriate to say regarding the virus were like small fires in @thelowell’s comments section, garnering dozens of likes.

What has been happening within the Lowell community is arguably a scaled down version of what has been happening around the world. News of violence against Asians in San Francisco, New York, London, and other places around the world has received widespread attention, especially on social media. Some prominent examples of this are an incident in Manhattan where a person punched a Korean woman in the face, saying, “Where is your f—— mask, you coronavirus b—-,” and another in a New York subway where an Asian woman was attacked after being called a “diseased b—-.” This has also been happening in other schools, where Vietnamese-American students from Garden Grove, CA were bullied during a cultural appreciation assembly and an Asian-American boy from San Fernando Valley was beaten to the point of hospitalization. Even President Donald Trump has been vocal on Twitter calling coronavirus “the Chinese Virus,” which escalated to the disease being referred to as the “Kung-Flu” by one of his officials to an Asian White House correspondent.

According to Song, however, the coronavirus is not the motivator of these racist attacks but rather the event that has simply exposed underlying racism that has always existed. “The coronavirus is the exact catalyst [many people] need to be able to justify their blatantly racist remarks towards the Asian community,” Song said. While racism against Asians has always existed, coronavirus has provided the perfect excuse to freely express that racism, according to Song.

As evidence of this, most of these racist instances brought about by coronavirus contain ideas and stereotypes that have been around for centuries. After Song’s encounter with the Caucasian man in Downtown, it was clear that he believed in the idea that she, as part of a racial minority, did not belong in the U.S. and could never belong. “[He gave] the implication that I wasn’t even born in America, or even worse, the implication that I was born in America, but that still doesn’t make me American,” Song said. The idea that people of different races are foreigners and will always be foreigners whether or not they are U.S. citizens is an old Nativist idea that has historically “othered” minorities. And the racist comments around the coronavirus’ origins in a Wuhan live market adds bat soup to the long-standing list of dogs and cats that common Chinese people supposedly eat, perpetuating the idea that Chinese people are barbaric or heartless. The idea that immigrants are inherently dirty or diseased also can be seen in many incidences of violence against Asians and stems from immigration regulations in the early 20th century. As Song says, none of this is new.

Song sees these solutions from SFUSD as the small first steps, and calls for even more action to educate students on misinformation, cultural sensitivity, and racial tensions. “Schools should start talking about this in their classes,” Song said. “They really should have been talking about the coronavirus [and racial tolerance] months ago.”

Many people have been affected by the coronavirus, either suffering from the disease itself or the contagion of racism it has exposed. Still, if work is done to properly address this problem, Song believes not everything surrounding the coronavirus has to be entirely negative. Rather, the pandemic could be made into an opportunity to address a type of racism that has usually gone unnoticed. She says that COVID-19 has allowed people to finally start noticing anti-Asian racism, and take matters into their own hands in confronting it. Many Lowellites’ united response to the racist comments in light of Lowell’s initial closure was a significant example of this solution in action, and Song hopes voices like these can help fight racism, one comment at a time.