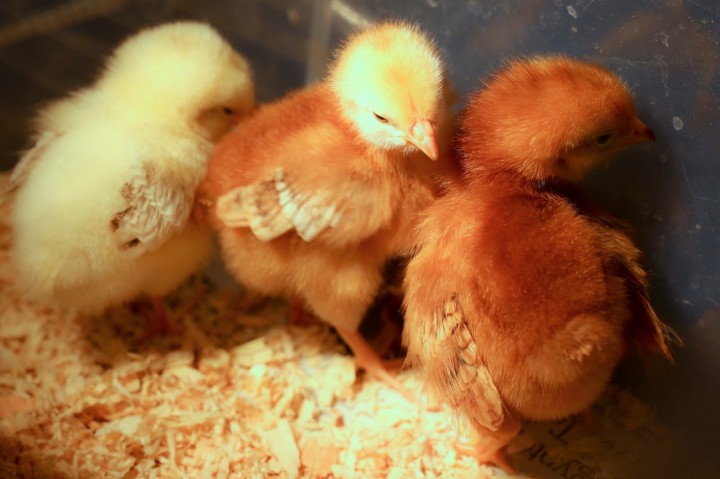 The chicks when they were only a few weeks old. Photo by Karina Huft

Whether you’ve seen them on Snapchat or heard their incessant chirping from the math wing, you may have noticed how big an impression the new chicks have made on the school.

But besides their cuteness factor, the eight already much-loved baby chickens have joined the Lowell community primarily to help six seniors complete their field study for AP Environmental Science, and will soon be residing in a student-built coop in the garden.

Students in APES classes have been the prime observers of the chicks because APES has a field study component, which requires every student to take an aspect of environmental science and follow a long-term study, according to APES teacher Katherine Melvin, who is the adoptive mother to the chicks.

“I think it’s been very good for the students to learn that this is like natural chickenness.”

Six seniors, Sierra Coathup, Seth Gottleib, Emily Brandau, Eric Tang, Chiara Olmes and Jacob Hagen, chose to focus on the chicks and learn how to measure aspects of their growth, the amount of material they use, the amount of food they consume, and how long it took to build their coop.

The students involved in the field study have enjoyed working with the chicks. “I absolutely love them,” Brandau said. “Even though they can be noisy and distracting, they’re really cute and fun to look after. You have to be very gentle so you don’t hurt them, but you also have to be quick because the chicks can run pretty fast.” 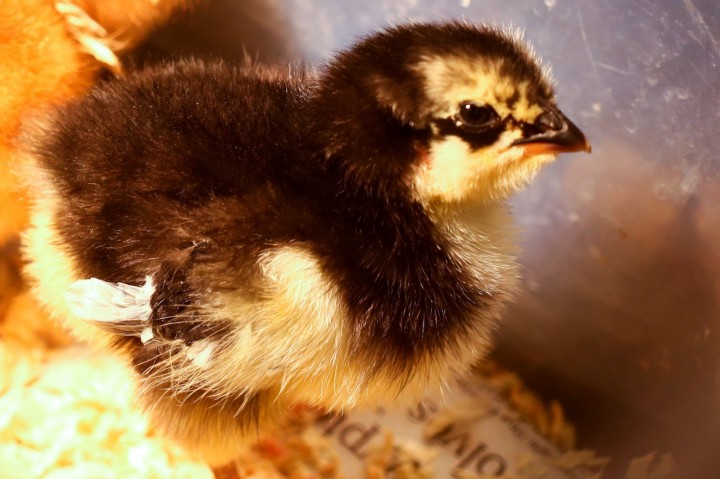 The first set of chicks arrived on April 19 and the second on May 4. “At first when the chickens arrived they were still too small and fragile for students to handle,” Tang said. “Now that they’re a bit older we’ve had a chance to pick them up and weigh them to track how fast they’re gaining weight.”

“I think the students are astounded with their growth rate,” Melvin said. “They’ve doubled in size since we brought them.”

Learning out in nature

Over the past few years, the APES classes have been increasing the use of the garden as an outdoor classroom. Melvin believes that being outside helps students in the course by seeing how living things grow and interact. “If we’re going to talk about ecosystems, we need to talk about how to raise animals, not just plants,” Melvin said.

“I think of the chickens as almost my children so I want to be there for them as they grow up.”

The chickens are not the first living things Melvin has brought in. APES classes have studied and interacted with bees because bees are pollinators, and they also have an aquaculture tank with fish, in order to learn how fish regulate the quality of the water. “We need to talk about how food is grown properly and how it works in the ecosystem,” Melvin said.

However, the chickens will not be used for their meat. Instead, students will observe them. The observing has been dominated by the APES classes, but other sciences have been excited about them as well, so the chicks have also made appearances in several biology classes. “I think it’s been very good for the students to learn that this is like natural chickenness,” Melvin said. 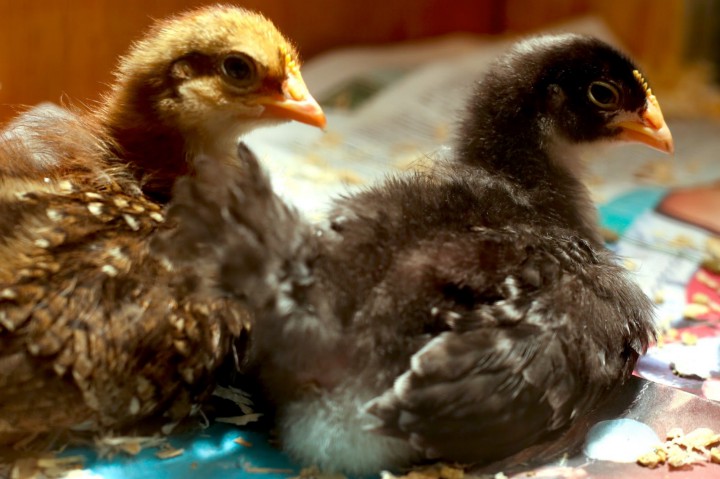 Photo by Karina HuftFrom Half Moon Bay to Lowell’s garden

The coop the chickens will be residing in came in several pieces with instructions, according to Melvin. Students then proceeded to build the coop in the garden, under the tutelage of biology teacher Catherine Christensen, who designed the run that surrounds the coop. To protect the chickens from predators such as raccoons and weasels, the team dug deep around the coop and inserted mesh in the area so animals would have a difficult time digging a hole into the inside of the coop. “I learned that building chicken coops is worse than building IKEA furniture,” Coathup said. “It was fun, but definitely frustrating because we’d move forward one step and then back three.”

“I learned that building chicken coops is worse than building IKEA furniture.”

Science department head Dacotah Swett purchased the chickens from Half Moon Bay Feed and Fuel, a store that sells farming supplies to local farmers in the area, including rabbits, dog houses and saddles. Because the chickens are being observed in the APES classes, the science department has paid for the chickens, their food and all other necessary materials they will need. Each chicken costs $5.25, and each pound of special baby chicken food is $1.00. The science department has purchased 30 pounds of food so far, according to Swett. “Having a farm is an investment — it’s money well spent for the educational purpose of teaching students about sustainable farming and the energy pyramid,” Swett said. 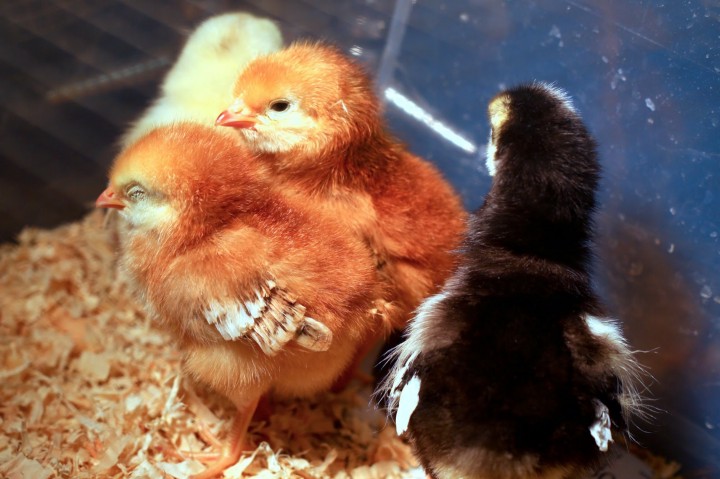 The chickens will remain in the science department until they are ready to live in the coop full-time. The chickens can move out once they’re around ten weeks old if it stays warm, but it also depends on how warm the summer will be since the chicks must rely on a heat source until they feather out. Unfortunately, it is very unlikely the chicks will be able to move in soon due to the cold weather over the past few months, according to Melvin.

“Sometimes we’ll try to feed them food that isn’t normally chicken food, like strawberries, but even when we throw it in front of their faces the chickens don’t seem to notice.”

The six students in charge of this field study have committed to helping with the chickens during the summer. “I think of the chickens as almost my children so I want to be there for them as they grow up,” Tang said.

As of now, the chickens have been staying at school throughout the week under the care of Melvin and the six students. On the weekends, Melvin and several other teachers from the science department are taking turns bringing them home. Melvin has also created a calendar so that the students can begin taking the chickens home on the weekends as well.

“The reason we need to take them home on the weekends is that they’re not too bright,” Melvin said. “Three times today they have managed to get water all over their bedding and they sat there all wet and unhappy.”

“They’re not the most intelligent animals,” Tang said. “Sometimes we’ll try to feed them food that isn’t normally chicken food, like strawberries, but even when we throw it in front of their faces the chickens don’t seem to notice.”

Growing up and moving out“The reason we need to take them home on the weekends is that they’re not too bright.”

Melvin has limited the amount of contact people have with the chickens. “Except for the students involved in the field study, I’ve had to say, ‘No you can’t cuddle the cute fuzzy chick,’” Melvin said. “The reason is that these are babies, and they can pick up colds from contact. The rest of the students are taking copious pictures, which is completely fine. There are people who come in and check on them every day. Long term, chickens aren’t really pets, which means they don’t really need to be cuddled.”

However, when it comes time for the chickens to make their move to the coop, the students working on the field study will get a chance to experience more interaction, in terms of basic skills, cleaning out their cage and getting them back into the cage at the end of the day. In the future, the chicks will be relatively free around the garden, with minor supervision to make sure they do not escape. There will also be some herding to make sure they get back into the coop, which is another fun interaction for the students, according to Melvin.

Next year, when the six students are no longer taking APES, Melvin will recruit another group of students to observe and help care for the chickens. When the chickens harvest their eggs later on in the coop, Melvin will sell them to various teachers. This kind of community-based agriculture is a continuation of what Melvin does with the produce from the garden, as well as the honey from the bees.

“Long term, I hope students will see more about how chickens are a part of the ecosystem and how they’re a part of pest control,” Melvin. “They love eating caterpillars, and they love taking care of some of the weeds that are a problem in the garden. They’re also just utterly adorable.”