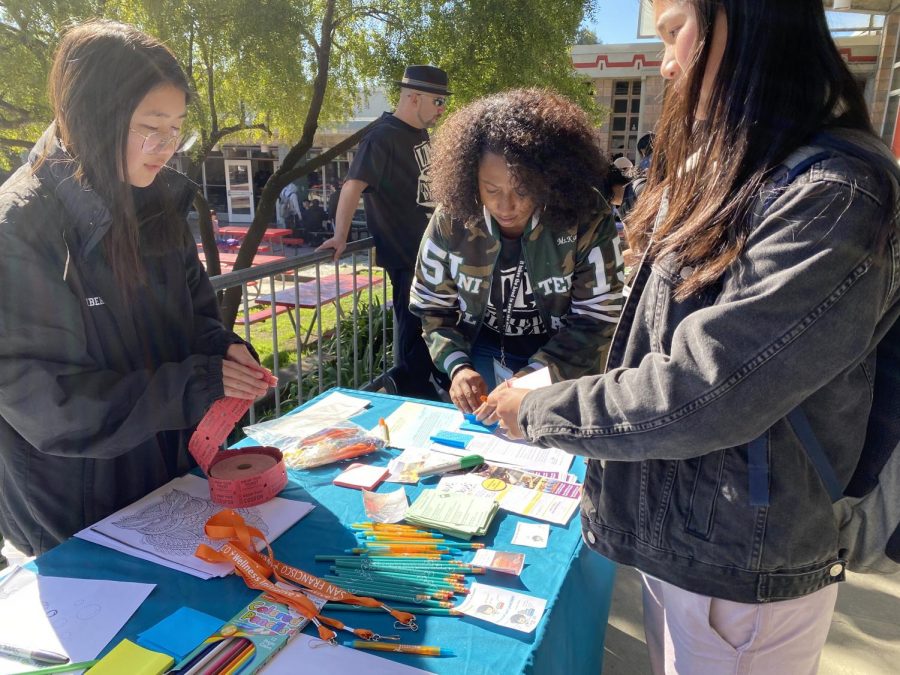 Students partake in activities on the Catwalk.

It’s passing period and Lowell students are bustling through the Catwalk to their next class, anxiously chatting about their hours of homework and stressing about how they have to get an A. When the dust settles, what is left is a few booths manned by students and professionals. These booths are adorned with motivational posters and encouraging post-it notes. However, few Lowellites are engaging with the booths — the booths set up that morning with the sole purpose of helping to improve students’ mental health.

Mental health awareness and addressing mental illnesses have been two big issues Lowell has faced for years. A recent survey by The Lowell showed that 36 percent of students believe they have some sort of mental illness, but not nearly that many receive help.

As part of their ongoing effort to try to break this trend, Lowell’s Student Body Council (SBC) teamed up with the Wellness Center to organize their annual Social Awareness Week (SAW) during the first week of February. Throughout the week, they put together an extensive itinerary of events ranging from booths on the Catwalk to presentations in the auditorium. According to SBC’s Community Liaison, Amber Chung, SAW had two goals this year: spreading awareness of mental health and destigmatizing mental illness. The week received mixed responses from students. Many gave positive feedback while others noticed issues with the lack of student attendance and were concerned with how much SAW was actually helping.

The SAW events were all aimed at improving mental health, whether through increasing the awareness of the importance of mental health or teaching methods of stress relief. Monday focused on meditation, which is useful to reduce stress and anxiety, and is already implemented as a program in many SFUSD schools. Tuesday featured mood tracking. Students would learn from peers how to fill out a pamphlet to track their moods and emotions throughout a month-long time frame. On Wednesday, there was a presentation put on by representatives of the National Alliance on Mental Health entitled “Ending the Stigma.” According to the SAW itinerary, “[the presentation was] devoted to giving students an opportunity to learn about mental health conditions.” On Thursday, SBC held a resource fair. A multitude of booths were set up along the catwalk, all aimed at teaching different cultural approaches to healing. On Friday, mask painting on the catwalk was coupled with the main event: speaker Ashanti Branch’s presentation: “The Mask You Live In.” Given in the Carol Channing Theater, the presentation emphasized the negative effects societal pressures of masculinity have on men, especially those of color, although the information could be applied to everyone.

Many Lowellites enjoyed SAW and appreciated the way that events were aimed at addressing the stigmatized topic of mental health. Junior Hadiqah Syed especially liked Tuesday’s event. “[The mood trackers are] just trying to break down barriers,” Syed said. “It allows students at Lowell who have expressed feeling of depression or anxiety to really reflect on their mood and how [they can] improve it.” Other students like senior Ella Weiss also noted the conversation the events sparked throughout campus — a conversation she believes doesn’t occur enough among Lowell students.

On the other hand, some students expressed doubt as to whether the events themselves were effective. Many thought SAW wasn’t addressing the issue head on. “Making a mask is nice, but it doesn’t do much,” said senior Luke O’Grady. Others were disappointed in the ways the coordinators almost seemed to belittle issues surrounding mental health in their approach to addressing them. “If you’re at a low point in your life, just seeing one person with a little sticker that says ‘You’re a superstar’ isn’t going to do anything for you,” said sophomore Ben Lester. Lowellites like O’Grady and Lester recognized that SAW was starting a conversation about mental health. The problem, in their eyes, is that events like SAW aren’t exactly doing anything to help people who are really suffering from mental health issues, which they believe is the real issue at hand.

Also noted by students was the fact that very few Lowellites actually showed up for the events, despite the carefully planned and detailed itinerary. Of a randomly selected group of students interviewed by The Lowell, less than 20 percent had been to any event. Students offered various reasons for not attending. Issues with time and scheduling were the most common answers. Lester, though he enjoyed the SAW presentations, observed that the Block 3 scheduling of the presentations made very few students able to attend, as the grand majority are in class at that time.

Another factor preventing students from attending SAW was the lack of knowledge that there were even events happening. Of the aforementioned group interviewed by The Lowell many students had a vague idea that SAW was taking place, but did not know the schedule of specific activities and events. Though SBC sent out emails and put up a poster in the stairway, it wasn’t enough as less than 20 percent of those who attended SAW actually knew specificities about the week. The fact that 80 percent of the student body did not have a good idea of what SAW included understandably resulted in many choosing not to attend.

As a solution for the next time SAW is held, some students offered ideas. Those ideas were not only for more effective programs, but also programs that students are actually involved in the making of. Sophomore Chloe Marinerstein thought that the only way to make changes that will actually improve students’ mental health is to directly ask students for feedback, and build programs based on that feedback. “[The administration] doesn’t really know what it’s like as a student,” she said. “Our environment is very hard on everyone.” Feedback will also allow students to have more of a say in scheduling, remedying one of the causes for lack of attendance this year. Additionally, Marinerstein believes the programs should be advertised around school more than they have been in order to promote awareness of the improved resources. Though not an easy process, she believes that this is the only feasible way to make lasting improvements that will reduce the stress Lowellites face on a daily basis.

Despite their criticism of SAW, students acknowledge the fact that the administration is trying to help address mental health issues. “I think it showed that the administration is trying to do something,” said O’Grady. Though they say much has to be changed, students do seem to think that SAW is propelled by good intentions and, with some requisite changes, could be a great event next year.