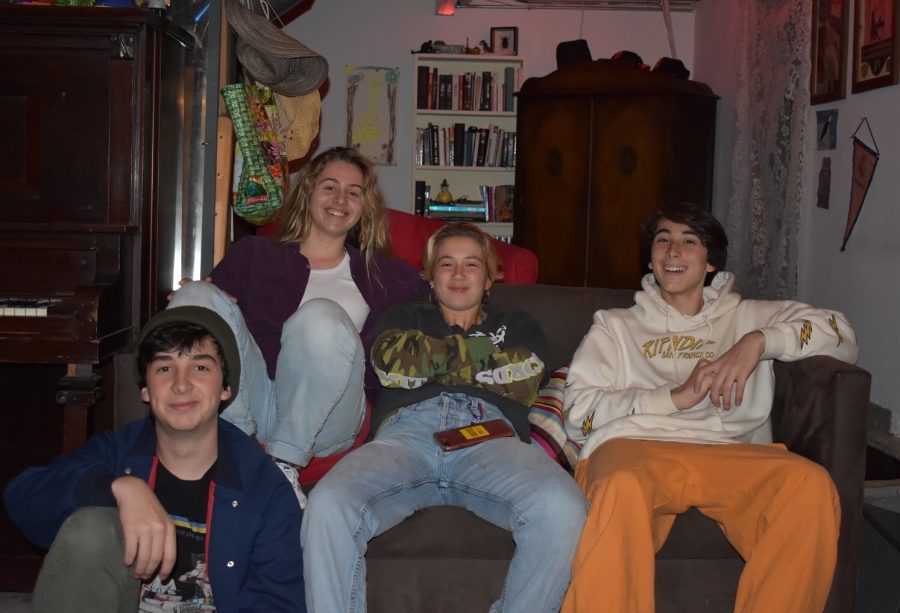 There’s a chill in the Sunday night air, but the last few blocks of Judah Street are a hotspot of activity nevertheless. A patchwork collection of Bay Area teens are clustered outside of the Honey Hive, a small and understated gallery that spends most of its days devoid of inhabitants but buzzes with life tonight. Skaters and artists, stoners and scholars, students from both public and private schools, blur together in one moving mass on the inside, brought together by one common love: music. The headliners of the show weave their way through the crowd to the front of the room. Guitar straps brush overall straps, palms grasp sturdy wooden drumsticks, fingers meander across an electric keyboard. The musicians strike their first chord, and the audience hears each note as it blends into the palpable atmosphere: the melting pot of emotion, movement, and all things wild.

This is Rabbit Stew.

Comprised of freshman Maddox Rochman-Romdalvik, juniors Annie Orzen and Stella Gould, and senior Skyler Chaikin, Rabbit Stew is a vibrant student band from Lowell. The four members all have backgrounds in rock and jazz and initially bonded over their mutual talents and love for music. Though they all experiment with different instruments, their usual lineup consists of Rochman-Romdalvik on bass, Chaikin on drums, Gould on guitar, and Orzen on piano. Working together, they’ve drawn from their passions for many other genres to build up a repertoire of original indie rock ballads that their audiences love.

Rabbit Stew has been three years in the making, according to Chaikin. In his sophomore year, after nine years of forced piano lessons left him in a musical slump, he finally decided to pick up percussion like his father had many years before. Three weeks later, still “fresh off the boat” in his words, he told Orzen he wanted to start a band. For a while, their plan didn’t work out. Then, in her first semester of junior year, Orzen met Rochman-Romdalvik in Lowell’s Jazz Band. Rochman-Romdalvik joined the group, and Gould was invited not long after. From there, the ensemble took off. “The first rehearsal we had…was so fun,” Gould recalled. “They played me some of the songs they had already written, and then I played them a song that I had written, and we all were just like, ‘That’s sick!’ We were all equally vibing with it.” Following their first few practices, the four quickly formed a bond. “We all came together, some of us not even really knowing each other, and then two rehearsals later they’re literally some of my closest friends,” Orzen said.

The group claims cooperation and respect as the glue that holds them together. Much of their success rides on the band members feeling like equals. “Nobody here is like, ‘I am in charge,’” Gould said. “Annie’s the ringleader, but she doesn’t have an ego and she’s not a dictator.” According to Orzen, each person helps write the songs and they all take solos during performances. Chaikin noted that they focus on making progress as a collective band, rather than as independent musicians. “It’s about humility and collaboration and gratitude. That’s what makes it work,” Orzen said.

The band’s writing process changes for every song. Most of their music has originated from the personal ideas of individual members. “We all write lyrics and we all write chords, so we’ll come up with an idea individually and bring it to the band…then all together, we’re like, ‘Do these parts work? Do they not?’” This process doesn’t always work out, however. “Sometimes Maddox will have half a song and Annie will decide to finish the other half, and then they’re in two different keys and that doesn’t work, and then we choose to cut that song altogether,” Gould remarked jokingly. Other times, ideas come when they’re least expected. “We’ll be practicing for a couple of hours and then we get kind of bored, so we’ll just sit down and talk,” Gould said. “And then it’s like 12:30 and then we’ll have an idea, and my mom will say, ‘You guys need to leave,’ and I’ll say, ‘But we’re there! We’re there!’”

Each member of the band feels a connection to music that outweighs the other passions they feel in life.  “Music is different, because it makes you feel something,” Rochman-Romdalvik said. He and Chaikin both appreciate how music transcends differences that set diverse groups of people apart. “There’s something so fundamental about music,” Chaikin said. “It’s really accessible, and it can be shared…it’s something that brings people together.” Gould feels that music serves as a comfort to her, reflecting her emotions even when they’re complex and hard to understand. “I feel like music’s always there for me,” she said. “No matter what is going on, I can play a certain song and it’ll adequately represent how I’m feeling.” Orzen feels that music is essential to her. “In sixth grade, my parents made me take a piano lesson, and at first I was so dead against it,” she said. “But I came out of it and my life was changed. I’ve literally never looked back.”

As of right now, the future of Rabbit Stew is unclear. The fact that Chaikin will graduate in June is on everyone’s mind; however, instead of worrying about a potential band breakup, the group is focusing on the present. “We’re trying to approach it in a positive way,” Orzen said. “Instead of ‘He’s leaving,’ we say, ‘Let’s play as much as we can, let’s release music, let’s play as many shows [as possible].’” They plan to record and release an album before the end of the school year and play live shows once a month in the meantime, starting with the upcoming Lowell Talent Show on March 27. This motivation may be bittersweet, but the band is taking it in stride with their usual enthusiasm and zeal. “It’s only going uphill and forward from here,” Gould said.