A year off: Why teachers take sabbaticals 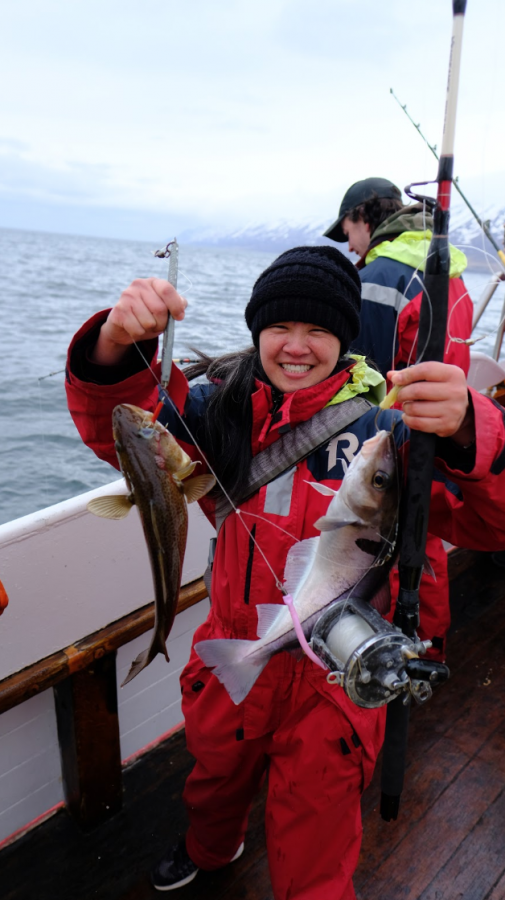 Hong shows off the fish she caught in Iceland.

We hear it every now and then: a teacher is on sabbatical. But what exactly is a sabbatical and why do teachers take these year-long breaks?

The sabbatical program is part of a contract between the San Francisco Unified School District (SFUSD) and the teachers’ union, United Educators of San Francisco. All SFUSD teachers are eligible to take either a semester-long or year-long sabbatical for every seven consecutive years of teaching. During any sabbatical, teachers are paid 60 percent of their normal salary and are expected to return and teach for at least twice as long as their sabbatical.

While some teachers take sabbaticals to address burnout other teachers, such as math teacher Lisa Hong, take a sabbatical because they want more time to explore their passions. Traveling is one of Hong’s favorite hobbies, so she wanted to take a travel sabbatical during the 2018-19 school year, during which teachers travel for a minimum of 75 percent of their usual workdays. Hong felt that a year off would give her the opportunity to experience seasonal sights, such as the Tulip Season in Amsterdam, that she wouldn’t be able to experience otherwise during the school year. “There were certain things that were on my bucket list of places I wanted to go and things that were seasonal that would be difficult for me to do while I was working,” she said.

Hong appreciates the sabbatical program as an additional perk to what she considers an already enjoyable job. “It’s rare to have a year where you don’t have to work, and you still have job security,” Hong said, who soaked up every moment of her sabbatical. “I enjoy seeing different cultures, architectures, [trying] different foods, learning about different histories, and just seeing a different lifestyle in a different place.”

However, Hong admits that being able to have this experience is a privilege. Hong is single, independent, and lives with her parents in permanent housing, which gives her the freedom to travel as she pleases without worrying about paying rent or a mortgage.

Hong can enjoy a travel sabbatical without worrying about personal finances, but others, like math teacher Tom Chan, don’t have that luxury. Chan has two children, so taking a sabbatical and getting paid 60 percent of his salary on top of having a high cost of living in San Francisco didn’t seem like a feasible option for him. In addition, traveling with a family would mean taking his two children out of school and his wife out of her job for an entire year. For these reasons, Chan opted for an educational sabbatical at City College of San Francisco. During such sabbaticals, teachers return to school and take classes to explore their academic interests. Attending City College allowed Chan to avoid travel expenses and gave him more flexibility to care for his kids.

Chan decided to take a sabbatical because he was feeling drained. Unlike some other teachers, he preferred to alternate the math courses that he taught every year, but that wasn’t the case, having to teach Precalculus Honors for five years in a row and then Algebra 2 for more than 5 years in a row after that. After 16 consecutive years at Lowell, the repetitive nature of teaching the same courses year after year caused Chan to become exhausted and long for a change of pace. This was compounded by his other time-consuming duties, like taking care of his two toddlers. “You only have so many hours of the day and you have to allocate however many hours to whatever things you need to do,” Chan said. “I was at a point where literally every summer, it was not enough for me to rest up.” As Chan found himself taking an increasing amount of mental health days off during those two years before his educational sabbatical, seeing other teachers go on sabbaticals made the idea of taking one himself seem more appealing.

Chan’s struggles with his work-life balance didn’t end instantly after starting his sabbatical. At the outset of his educational sabbatical, Chan took Japanese, a language he wanted to continue learning from high school. However, the curriculum was exceptionally demanding, prompting Chan to study for at least two to three hours a night, excluding test days, when he woke up at 4 a.m. to study for his tests. This situation led him to reevaluate the reason he took a sabbatical, and he ultimately concluded that his intention for taking a sabbatical was to restore his mental health. “I saw how much time I was putting into that class and I just told myself that it definitely was not worth it,” he said. “I felt like I studied way more than I should’ve.” So Chan replaced Japanese with Calculus during his second semester. Since he was already familiar with the material taught, Chan was able to focus on enjoying his time off from school, and by the end of the second half of his sabbatical, he was thoroughly rested up.

Many teachers return from a sabbatical refreshed and excited to teach again. By the end of his sabbatical, Chan felt like he did when he first started teaching: eager to get back into the classroom. “I finally had that same attitude after my sabbatical,” he said. But these sabbatical adventures require planning and commitment. Chan saved money up for a few years in order to afford taking a cut from his salary. In a travel sabbatical, a considerable amount of time is needed to plan out destinations, transportation, and accommodations, since teachers will be abroad for more than two months.

Applying for a sabbatical doesn’t guarantee getting one. Sabbaticals are granted based on seniority, so realistically a teacher needs more like nine years of service to secure a spot. In Hong’s cohort, about one hundred SFUSD teachers of all grades applied and only 60 of them were granted a sabbatical. In addition, although the sabbatical application is pretty simple, many teachers find it hard to participate in the program. “It’s not something that [Lowell] publicizes hugely, like you can’t just go to the [Lowell] website and see,” Hong said, “You kind of have to know about it ahead of time and then inquire, or look for it on the SFUSD website,” Hong said. This may be because taking a sabbatical is rather uncommon among the faculty at Lowell even though many are eligible. This 2019-2020 school year, only one teacher is currently on sabbatical while four were on sabbatical in 2018-2019, according to administrative assistant Maria Seeto.

Despite the somewhat confusing process, teachers’ have taken away lasting positives from their sabbaticals.

English teacher Jennifer Moffitt extols the value of taking such a break for a source of personal enrichment. “If you’re going to have long-term teachers with experience, which is a good thing, you also want teachers who can recharge themselves and not burn out…and a sabbatical is a great way to do that,” Moffitt said, who took a travel sabbatical during the 2017-18 school year. “Teachers need to be lifelong learners and generally we have very little time to get our heads up and reflect on what we’re doing and to grow as human beings,” Moffitt said. “It’s not just skills and knowledge that we bring into the classroom but our development as people and sabbaticals help you work on that.”

For biology teacher Mark Wenning, his travel sabbatical was an experience that gave him a more appreciative view of life in general. “It’s kinda like when you have a near-death experience or you’ve had some kind of setback that makes you think about mortality then you stop to smell the roses from then on,” Wenning said. He says that the sabbatical benefitted not only him but believes that students’ world views can be limited given that they spend most of their time in school, but bringing back stories from his international travels to his students broadens their horizons. For instance, Wenning went scuba diving, something he’d never considered before, but it turned out to be one of the highlights of his sabbatical, and he still tells stories about it 16 years later. “Life isn’t just about taking a test; it’s also about what’s going on in the world and how people live that might be different from yours,” Wenning said.