Give me convenience or give me death: MUNI waits lead many to Uber and Lyft, but ride shares have their own problems 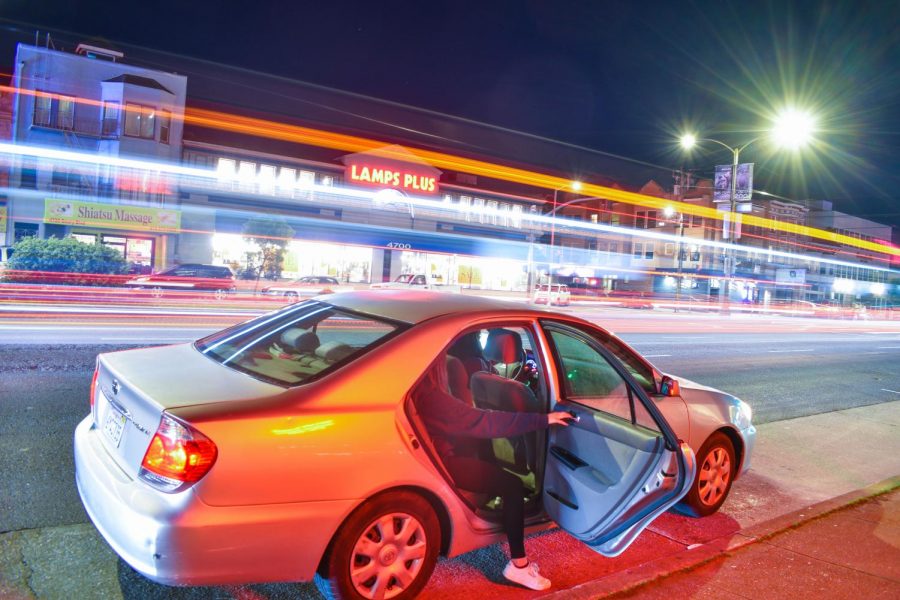 MUNI waits lead many to Uber and Lyft, but ride-shares have their own problems.

It’s 8 a.m., a student is waiting for the bus. The NextBus prediction has been frozen at 15 minutes for twice that time, and stress fills their mind as they contemplate arriving late for their quiz. With growing irritation, they pull out their phone and decide to order an Uber, hoping they can still make it to school on time.

Late nights and long waits for public transportation are not new to many Lowell students. When it comes down to choosing between waiting 30 minutes and confronting an hour-long bus ride involving multiple transfers or simply pulling out their phone and ordering a direct Uber ride, more and more students are choosing the latter.

Among Lowell students interviewed on the matter, all cited convenience as their main reason for using ride-sharing services. “If I’m not feeling up to taking public transportation…because it’ll take a long time…I Lyft,” junior Lilo Bergensten-Oliv said. Other students echoed this complaint about public transportation. “The timings aren’t super reliable,” junior Francesca Ficano added. “It can take a really long time…when I have to wait for a train or a bus, and if I have a specific time I need to be somewhere, I [either] give myself a lot more leeway or I take Uber.”

The matter of inconvenience in public transportation for Lowellites is compounded by the substantial number of Lowell students who take the bus every day. A February 2017 survey by The Lowell found that nearly half of Lowell students use the bus at least once every single school day.

Other students added that, in addition to waiting for individual bus or train lines, transfers and the length of the route they need to traverse also pose difficulties. “Last semester, I had tennis practice,” Sophomore Olivia Ruderman said, “And I really didn’t want to…walk to the M stop, get off the M, and then take another bus to my house so I would just sometimes order an Uber, because it was easier.”

These statements reflect MUNI’s ongoing and growing problems with on-time reliability, and the reasons behind them aren’t new, either. MUNI has a mandate by city legislation to have its buses, trains, and streetcars arrive on-time at their stop at least 85 percent of the time. However, its actual rates are nowhere near these goals, and its failing has been a fixture in local news and politics since the late ’90s. Despite the organization as a whole being well-funded, deferred maintenance (driven in part by a desire not to impede MUNI riders and from what the SFMTA described as “decades of underinvestment” into infrastructure maintenance) accounts for nearly half of subway delays. Slow progress on transportation improvements and conflicts between the SFMTA and the MUNI drivers’ union have also reduced performance and angered riders.

There is also another, largely ignored problem: traffic. Traffic in San Francisco is among the worst in the country, ranking as the eighth worst according to the Inrix Global Traffic Scorecard. These facts shouldn’t be surprising to any resident of the City since the recent Proposition D from the last city election cycle intended to use the money raised from taxing ride-sharing services’ fares for a proposed “Traffic Congestion Mitigation Fund.”

In the face of such daunting obstacles to fast and reliable service, some familiar with the matter wonder whether such ambitious city goals are possible. “You could debate whether the [MUNI on-time reliability] goals are realistic,” Michael Cabanatuan, San Francisco Chronicle reporter and former Chronicle transportation expert, remarked in 2017. “Given the heavy traffic and how much traffic has increased in recent years, combined with the hilly terrain, and the unstable passengers, [MUNI bus times] can be extremely unpredictable.”

Unsurprisingly, this causes inconveniences for Lowell students no matter the mode of transportation they use. “[Traffic doesn’t inconvenience me] super often [in a bus or a car], but sometimes extracurriculars and [the] time [it takes]…to get there…[is] inconvenient,” Marie, a sophomore who requested to remain anonymous, said.

Despite industry claims to the contrary, ride-sharing services are not innocent in the recent increase in traffic. In fact, a study by transportation analyst Bruce Schaller found that ride-sharing services were directly responsible for much of the increase, with the additional 5.7 billion miles driven by these vehicles increasing driving on city streets by 160 percent overall. The study also found that 60 percent of those surveyed would have used public transportation if ride-sharing had not been available. This comes at the same time as a series of historically low MUNI on-time reliability statistics, and became exaggerated to such a degree that it even lead to statements from the SFMTA directly accusing Uber and Lyft of worsening city traffic congestion.

In addition to increased traffic, safety concerns are rampant among ride-sharing services. In late 2019, Lyft and Uber faced dozens of lawsuits and thousands of reports from women who had allegedly been sexually assaulted or raped by Lyft and Uber drivers, and claimed that both ride-sharing services attract predatory drivers and don’t fire them despite confirming that they had sexually assaulted or even raped riders.

Sexual harassment issues also affect Lowell students, including Marie, who has been using Uber since fifth grade, despite being underaged. During an Uber ride a few months ago, Marie felt uncomfortable when her driver started to make sexual advances toward her and made her feel unsafe. “[The driver at the time] was very clearly [and] creepily hitting on me, and he knew I was way underage, because I mentioned it,” she said. Marie decided to report the incident on the Uber app, and her account was consequently banned as a result of her being underage. “Usually I wouldn’t report it, but I was feeling scared,” she said.

Many Lowell students are aware of safety issues concerning sexual harassment by ride-sharing drivers. “I would say that…if you think about Ubers and public transportation, [ride-sharing is] less safe,” Marie added, “[Ride-sharing is] more comfortable in the moment, [and] definitely most drivers are totally safe and fine, but…the driver controls everything in that car and you’re…usually one-on-one with the driver unless you’re in a pool, and then you’re at risk with the other people in the ride…it’s more personal.”

Despite knowing that ride-sharing services aren’t the safest, Lowell students continue to use Uber and Lyft regularly. As a result, this causes inconveniences for the broader Lowell community. Last year, there were two incidents where an Uber or Lyft vehicle ordered by a student coming onto campus via the fire line nearly ran other students over. This prompted Assistant Principal Orlando Beltran to contact the District and get the default vehicle order location changed.“I emailed the [SFUSD] legal department last year to get in contact with Uber to change where the pin drops,” Beltran recalled. “If I put Lowell High School…now, it instructs me to walk to the corner, up to Eucalyptus, which means that maybe we haven’t gotten any issues this year because they’ve changed the pin…the legal department probably talked to Uber and said, ‘Hey you need to move the pin to the front of the school.’”

Although there have been no serious incidents since then, some students remember the large influx of vehicles on campus with irritation. “I have [had problems with it],” Marie said. “Freshman year it was a problem…you’d order it to the school and it wouldn’t let you specify where, so drivers would come down [the fire lane], and you’d be waiting up [at Eucalyptus] and you’d have to call them or run down.” Sophomore Erica Paschke added, “Sometimes, I’ll order food and it’ll go the wrong way, but that’s the only thing.”

Difficulties with transportation are unlikely to spontaneously vanish. Especially as our world becomes more technologically reliant, people will likely continue to seek convenience in their daily lives despite the costs. Marie acknowledges that a certain degree of inconvenience in daily life and transportation is inevitable. “[Riding the bus is] more uncomfortable, obviously, than having your own seat and window [where] it’s quiet,” Marie said. “[But] it’s not a big deal, it’s just if you can take a car, it’s more comfortable. It’s not super fun waiting for [the bus]…[and] it’s inconvenient, but you know, it’s just living in a city.”