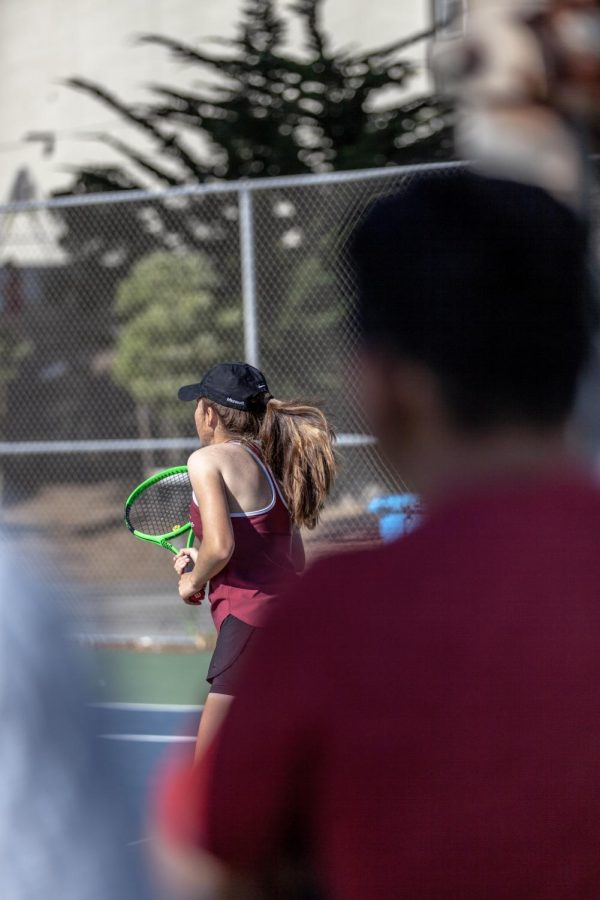 Sophomore Danielle Vakutin is pictured setting up for their opponents serve. Photo by Nico Ramirez.

Every day after school for three months of the year, the girls of Lowell’s Varsity tennis team congregated outside the shaded tennis courts, buzzing with pre-practice conversation. This year, their discussions expanded to include a new topic: their newborn rival team from Lincoln High School.

For the first time in approximately 20 years, Lowell’s girls tennis team was facing strong competition from Lincoln. Through a combination of natural skill, stellar coaching, and diligence, the girls’ tennis team has remained undefeated in the All City championships since 1998. But earlier last semester, their former coach, Daryll Fong, announced that he would be transferring his coaching skills to Lincoln, evening the playing field, as Lincoln’s team was previously student-run. This change set into motion a very different season than the ones the girls were used to, as Fong’s transfer bridged the gap between the two schools, and the teams began to interact outside of their seasonal matches. These interactions birthed a camaraderie between the two teams while building confidence and skill to fuel their rivalry.

To rise to meet their new challengers, the Lowell girls increased their repetition of practice drills this season. They focused on consistency: a common trouble spot for tennis players, according to sophomore Danielle Vakutin. She and her teammates practiced cross-court (diagonal) shots as well as down-the-line (straight) shots in order to get comfortable enough with the motions that they could easily integrate them into gameplay.

In addition to polishing their playing ability, the remaining coaches John Mohr and Byran Lee work with the girls to improve their mentality. “We work on telling them, you be positive when you go out there. No negativity,” Coach Mohr said. He hoped that going into their matches free of negativity and self doubt would yield more victories for the team. Vakutin approached her matches with a different mindset, but one still geared towards dispelling apprehension. Putting her nerves aside, she remembered to look at the bigger picture. “I tell myself that it doesn’t always matter- win or lose. Even if I lose, it doesn’t mean our team will,” Vakutin said. “At the end of the day, it’s not about the outcome, it’s about having fun and being happy with your match.”

Along with ramping up their practice routine after school hours, the girls experimented with a new exercise in team bonding during the season, one that involved consorting with their newly minted rivals. As proposed by Fong after his departure, the Lincoln and Lowell girls began to scrimmage and run drills together during Saturday practices. Fong hoped to create a sense of kinship among the athletes while also bringing about improvements to their technique, and the practices yielded those exact results. Mohr was immediately on board when Fong proposed the idea, and looked back on the progress the Lowell girls had made by trying it out when the season came to a close. “I could get out there and hit the same type of ball over and over again, but when you see new techniques other people are using, your game improves and you’re ready for it when you see it in a match,” Mohr said. “I’m sure it’s helped the girls.”

Before her All City match, Vakutin reflected on the benefits and drawbacks of practicing with the Lincoln athletes. She and her opponent both went into their All City match with new insights about each other, gained during the long hours on the courts that they had already spent together. “I know her style, but it’s two-sided because they also know our game,” Vakutin said. All competition aside, Vakutin appreciated the camaraderie as well. “We’ve never really been close to any other team before,” she said. “I’m excited to have friendly competition.”

The tension and excitement peaked in the final All City Championship matches. Lowell emerged victorious despite a strong effort from Lincoln, as they upheld their 21-year winning streak. Mohr was pleased to see medals distributed across the two teams, and was satisfied with the girls’ tenacity and effort. According to Vakutin, the Lowell girls gained a lot of respect for their opponents last season and will continue to build their relationship with the Lincoln team in the years to come.