Construction at Stonestown: What to Expect 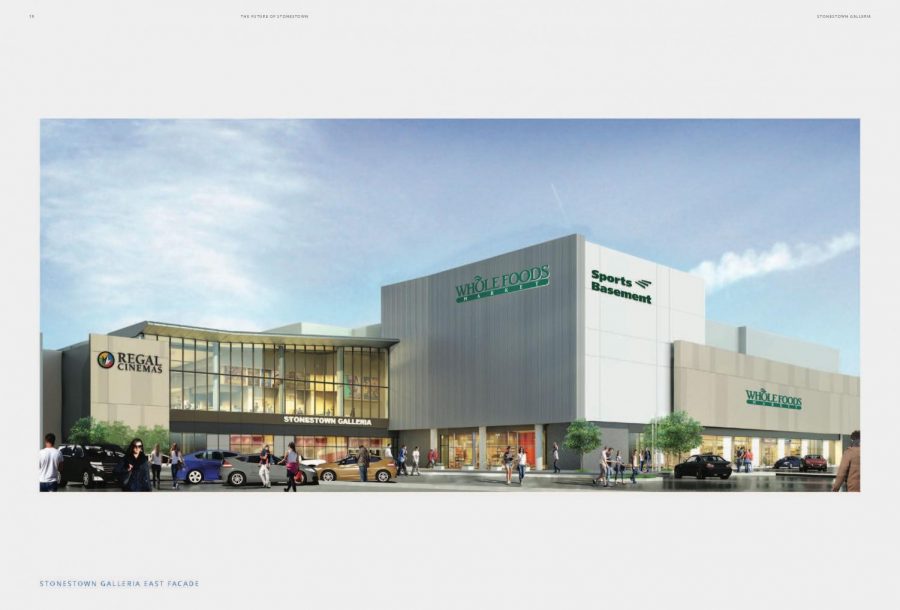 Ask any Lowellite who walks or drives by Stonestown Galleria on their commute to school, and they will be familiar with the work that’s being done throughout the parking lot and within the former Macy’s building. Along with the neon green barrier raised above the ceiling of the building, the presence of numerous cranes and trucks indicate a construction project. This project has been ongoing since March, and shows no signs of slowing down. But what exactly is being built?

The 280,000 square foot space of the Macy’s building will be rented out by Whole Foods, Regal Theatres, Sports Basement, and other smaller stores, according to Stonestown senior general manager Darren Iverson. Iverson said these additional stores have yet to be officially announced, but will include sources of entertainment and cuisine. The goal of the new store openings is to offer additional resources to the general public, which will serve all families and students. These facilities are designed to benefit students who attend San Francisco State University and Lowell in particular, according to Iverson.

In addition to the facilities being built in the old Macy’s building, there is more to come on the other bookend of the mall. Nordstrom closed its doors on September 13th, and is currently being renovated. Target’s residency will be expanded to the entirety of Nordstrom’s previous ground level. The second floor of Nordstrom will be occupied by smaller stores, which have also yet to be announced. They will likely be restaurants and other sources of entertainment, according to Iverson.

The addition of these businesses is generally viewed in a positive light by Lowell students. “It’s great for the community,” Senior Marc Aronce said. “It will allow for a lot of interactions. It [will] make it a lot more fun to go to Stonestown.”

However, the addition of Whole Foods to Stonestown doesn’t make sense to some Lowell students. The higher prices don’t mesh well with those who prefer a cheaper alternative and aren’t willing to shop from Whole Foods. “I think it’s kind of silly to put a Whole Foods there,” Senior Emma Greene said. “No students will have the money to go to Whole Foods and buy [at] those prices, especially [with] a Trader Joe’s right there.”

Aside from student concerns over the prices of some of these new businesses, the other issue is the timeline. Since construction won’t be completed until the end of next summer, students in the Class of 2020 won’t have the opportunity to experience the new additions. “I have an issue,” senior Kyle Carigo said. Carigo wants to visit the new stores and experience these changes, but won’t be able to since he’ll be graduating this year. His inability to witness these changes is the reason for his disappointment. “I want to experience it,” he said.

While construction at the old Macy’s site is expected to be complete by the end of August 2020, there is no specific timeline for the completion of construction in the Nordstrom’s building since the idea is fairly new; no plan has been established yet. Regardless of these uncertainties, plenty of new stores are expected to be complete at Stonestown by the beginning of the 2020-2021 school year.