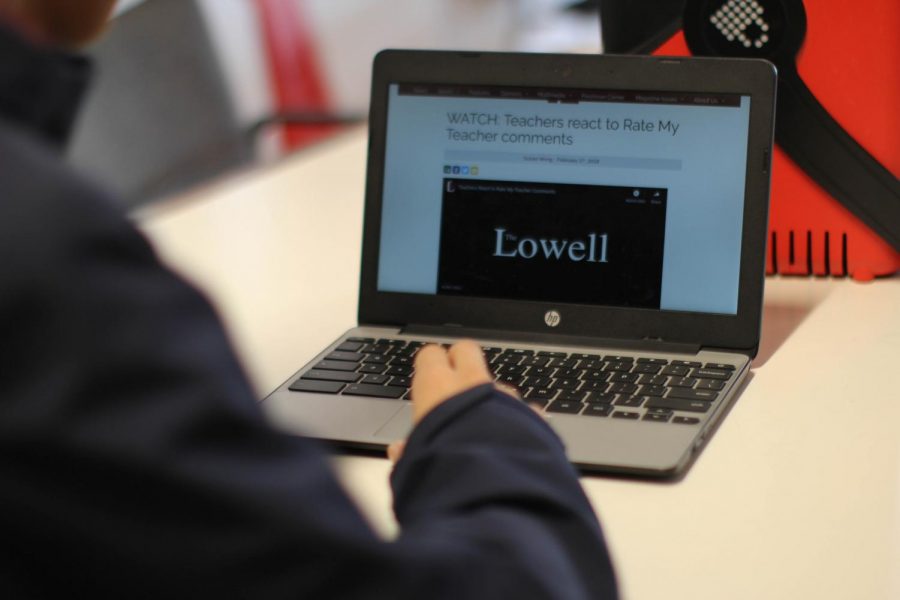 Last spring, the Rate My Teacher website was redone, wiping many of the old reviews and introducing a new process for writing a teacher review.

The popular teacher rating site, aptly named RateMyTeachers.com, has been around since 2001, and over the years has gathered thousands of teacher reviews detailing classroom experiences. Many Lowell students had come to rely on it for picking their teachers and classes when Arena came around. It was surprising, then, when in the spring of last year all of the written reviews had been wiped, leaving students who rely on it for planning their schedules out of luck.

The Rate My Teachers (RMT) website provides students with an anonymous online platform to, as one would expect, rate and review their teachers. There are scales from 1-5 for categories like easiness, knowledge of the material, and helpfulness. In addition, before the change, there were comments where more detailed experiences could be written out.

The nature of anonymous sources is that their information may be unreliable or even libelous, and some teachers have found issue with the unfiltered reviews students can leave, true or not. Last year, new ownership of the site “thought it was time for a fresh look and updated approach,” according to their website. Along with a new look, the site deleted all written reviews and disallowed new ones, saying that “most were not actually helpful.”

In a blog post, RMT says that they have recently brought commenting back, but with a new, more moderated process. After creating a new account (the overhaul also introduced a new login system so everyone must make a new account), a student can create a review by filling out a series of 10 multiple-choice questions and then writing their review.

While the numerical responses instantly show up on the teacher’s page after a review is made, the written response takes several days. The site’s FAQ states that reviews are first moderated before being publicly posted, but does not specify how long it takes for a review to be posted. For all 160 entries on Lowell’s RMT page, only three teachers have written reviews, and many teachers had fewer than 10 numerical ratings or none at all.

Some Lowellites are in agreement with the removal of the public comment system, believing the comments to be inaccurate depictions of teachers. “People only write reviews if they really like or really hate the teacher, so it’s unreliable,” junior Sarah Tanabe said.

Other Lowell students can see the unreliability of the ratings on RMT but believe that the comment section is the most accurate component of the reviews. Junior Emerson Meyer XXVIII had one teacher in particular whose class he enjoyed, but who had a two-star rating on RMT. However, when he checked the comments they revealed that it was because he was the type of teacher who was difficult and strict on phones in class, which is what Meyer wanted. “In reality the only important [things were] the comments and not the actual score,” he said. Had he only seen the numerical ratings, he would have dismissed the teacher and found someone who might not have fit his tastes as well.

Many other Lowellites feel that the comment section is necessary because Lowell is unique among high schools in that it has the Arena system, where knowing more about the teachers is important to picking the following year’s schedule. “In Rate My Teachers I get a sense of how the teacher teaches,” said Jimmy, a junior who wishes to remain anonymous. “I know how I can expect them to explain stuff to me.” Another student, senior Erin Stone, was unhappy with the removal of the comment system because it made her Arena selections more difficult this year. “[Rate My Teachers] is essential to Arena if you don’t have access to word of mouth about the teachers at Lowell,” she said.

Some teachers at Lowell also feel that the benefit of student feedback from the comment system is very high. Bryan Marten, who teaches AP Chemistry, acknowledged that in an anonymous forum, there can easily be responses of “the lowest common denominator.” However, he is also appreciative of the honest opinions of his students that he likely wouldn’t hear otherwise. “There’s people that are very conscientious about it, and so I think that can be helpful for teachers to be aware of some things if they’re not getting that kind of feedback in the classroom,” he said.

Biology teacher Mark Wenning also sees the written reviews positively. “I always appreciated my Rate My Teachers ratings because they were feedback from my customers, my clients, and it was good feedback,” he said. “I was proud of my rating on RMT. [Positive feedback from my clients] is one of the things that’s better than any award or teaching certificate I ever received.” While teachers do get evaluated about every two years by the administration, for Wenning, the single period they observe the class isn’t as important as what his regular attendees say. “Students took the time to say that they really liked this teacher and why they really liked this teacher,” he said. “That’s better than money to me.”

For now, the long moderation process for written reviews looks like it’s here to stay. In the future, as more students get used to the system and RMT receives feedback, we may see more reviews coming out, so that there aren’t teachers with only two or three ratings. Until people get used to the new site design and start adding more data, students are going to have to rely on word of mouth from their peers and counselors’ advice.

*September 24, 2019 at 8 p.m. update: The website Studentsreview.me archived all of the deleted RMT reviews of Lowell teachers from as far back as fall of 2014. The site was created by an unknown Lowell student and contains data for over 200 Lowell teachers and over 10,000 reviews. It also allows users to create new written reviews, which are posted instantly and use RMT’s old 5-star rating system.*