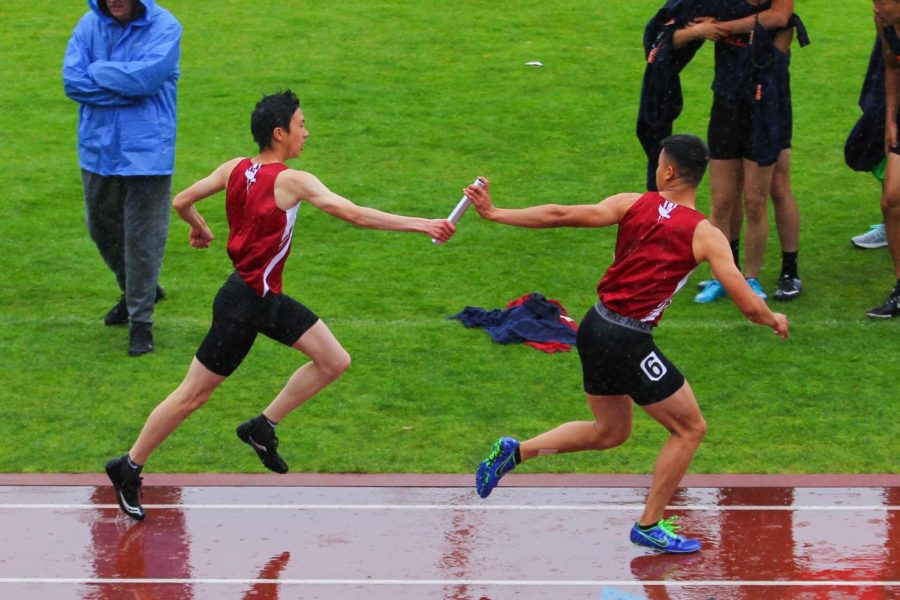 Athletes gathered at Kezar Stadium on a rainy Saturday for All-City Finals on May 18. But, due to the rain, some of the field events were postponed to the following Monday at Lowell. The Cardinals dominated in the distance events, but lacked athletes in the field events, especially in the jumps and throws.

At 9:30 a.m., while the track was still dry, the meet commenced with the girls frosh-soph 100m hurdles. Freshman Katja Jackson placed first with a time of 18.57, scoring the first 10 points for Lowell.

The 4x100m relays followed all the hurdle events. Lowell’s relay teams placed first in all divisions except boys varsity.

Around 10:30 a.m it began to rain and it didn’t stop for the rest of the day. Over at the discus ring, senior Mandy Lin finished in fifth place with a throw of 74-05 scoring one point for the varsity girls.

Next up on the track was the girls frosh-soph 1600m. Sophomores Claire Low and Juliana Chen finished first and second, respectively. Low finished with a time of 5:43.28 and Chen finished five seconds later with a time of 5:48.88. In the boys frosh-soph 1600m, Lowell took the top three positions. Sophomore Andrew Blelloch finished first, beating freshman Oliver Witt by 0.24 seconds with a time of 4:40.65. In the girls varsity race, freshman Jenna Satovsky won first place with an outstanding time of 5:14.17–over eight seconds faster than the next runner. Lowell’s varsity girls secured the top four spots in the 1600m, scoring a total of 28 points.

Finally, it was time for the boys varsity 1600m. Senior Noah Battaglia finished first with a time of 4:30.67. Junior Zachary Parker finished next with a time of 4:34.46. Third place came down to the final strides where senior Beck Johnstone was head-to-head with Lincoln’s Charlie Moore. Johnstone ended up beating Moore by 0.23 seconds, securing the bronze medal and six more points for Lowell.

Some outstanding performances in the 400m included sophomores Dakota O’Brien and Brianna Grissom. Dakota O’Brien won first place in the boys frosh-soph division with a time of 53.79. Grissom was the only athlete in the girls varsity division to finish the 400m in under a minute, coming in at 58.42, over two seconds ahead of the next runner. Senior Jovin Cheung and junior Godfrey Obiero both false-started in the boys varsity 400m, leaving only five runners in this event. Junior Luke Woodhouse was able to secure third place with a time of 53.92.

Seniors Kathleen Mai and Emily Liu finished first and second, respectively, in the girls varsity 100m dash with times of 13.21 and 13.29, scoring a total of 18 points for Lowell. Cheung placed second in the boys varsity 100m with a time of 11.81, he was one out of two athletes who finished under 12 seconds. Junior Ethan Fung came in first in the para division with a time of 13.89.

Low and Chen came in first and second in the 3200m for the girls frosh-soph, with times of 12:37.62 and 12:45.85, respectively. This was a personal record for Low. Sophomore Viviana Ojeda also achieved a personal record and came in fourth with a time of 13:33.33. In the boys frosh-soph division, freshman Benjamin Lester came in well under 11 minutes and was the only athlete to do in this race. He won first place with a time of 10:46.57. The next finisher, freshman Paola Canigiula came in with a time of 11:05.80 and placed second. Sophomores Ali Aldala and Benjamin Lau finished fourth and fifth, with times of 11:21.23 and 11:21.47, respectively. Lowell swept first through fourth in both the boys and girls varsity divisions of the 3200m. Satovsky took home first for the girls varsity with a time of 11:20.47, finishing over 45 seconds faster than the next runner, freshman Elizabeth Holcombe, who came in at 12:08.02. Despite the rain, Satovsky was able to come out on top with a personal record. “It was just very cold and wet and it was hard to continue to be motivated and not just want to quit,” she said. Juniors Michelle Wong and Emi Steedman came in third and fourth with times of 12:29.84 and 13:10.27, respectively. Battaglia placed first with a time of 9:44.44, followed by Parker with a time of 9:47.52. Seniors Ian Lawrence and James Holcombe came in third and fourth with times of 10:07.25 and 10:37.61, respectively.

To round off the day one of All-City, Lowell swept in all four divisions for the 4x400m relay.

At the end of the meet, Satovsky was awarded The Kirtman Family Award for being the Most Outstanding Performer. Not only did she triple and run three events, she won first in all three. She is the first female freshman to have received this award. Satovsky goals for next season are to push herself to be better, so she can be more competitive statewise and to break five minutes in the 1600m.

In the varsity girls pole vault, senior Jennifer Hui placed second with a vault of 9-00.00. Junior Isabelle Sam and sophomore Kaitlyn Lau both finished at 8-06.00, but Lau took more attempts at one of the previous heights, so she placed third.

In the varsity girls triple jump, junior Olivia Chao took third with a jump of 32-05.50.