Unpacking the complications with Arena this semester 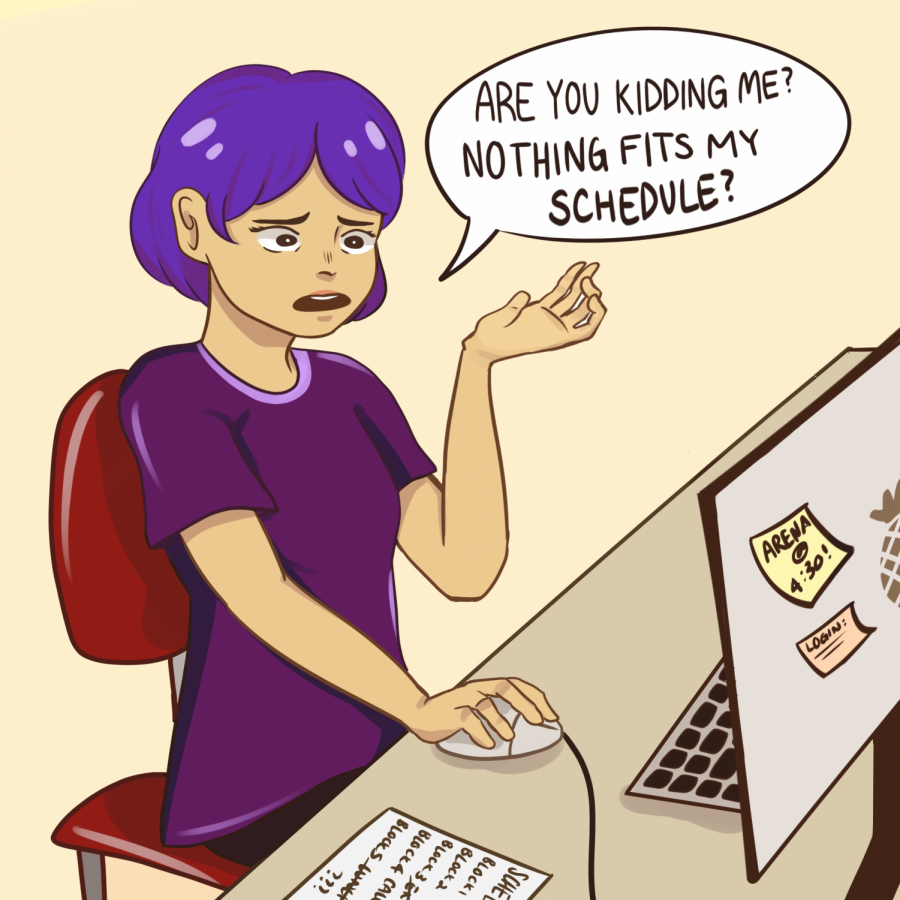 “I have no idea what to do with my schedule,” sophomore Joy Cheng said. With the added constraints of a mandatory lunch block and the blocks of her AP English class changing post Arena, Cheng had many difficulties creating a satisfactory schedule. Cheng’s sentiment was felt by many Lowellites in the weeks during and after Arena, when students select their schedule for the next semester. This year, the Arena process was extra chaotic for students, leaving them stressed and wondering why this year was worse than previous years.

For department heads, creating the teacher schedules was particularly difficult this year. Before, students were free to select whatever off block they wanted. But because of the new lunch block policy, department heads had to avoid putting certain classes during blocks four, five, and six, which were supposed to be off blocks for certain grades. This was further complicated because, at the time, they thought that the schedule next year would be BC code, with even numbered blocks and odd numbered block having a different class length. “That turned out to be, along with the lunch periods, an impossible set of constraints to work with,” math department chair Karl Hoffman said. “I think that’s finally why we ended up going to neutral because we realized that it was at an impasse and there was no way to make the schedule work out.” In the end, implementing the neutral schedule solved some of the scheduling problems the department chairs were facing, but several problems still remained.

An additional complication for this year’s Arena was that the timeline was moved up. Typically, Arena takes place the week after AP testing, but this year it was changed to the week before AP testing. Administration made the decision to move up the date partially because Assistant Principal Ivan Yee, who coordinates Arena and helps fix incomplete schedules, is retiring after this year. In years past, former Assistant Principal Margaret Peterson would stay after school let out for the summer to finish fixing all the incomplete schedules. Since Yee is retiring, though, all his accounts will be deleted as soon as the year ends, so he must finish all the incomplete schedules before then.

In order to balance classes and ensure that students would have the proper block off, the blocks that certain classes were offered had to be switched. This created additional issues that the counseling department had to fix, and forced many students to completely change their schedules. When Cheng did Arena, her English class, AP 75/77, was offered blocks 4 and 6. After Arena, that class got switched to blocks 3 and 5. In the end, Cheng had to go to her counselor and change several of her classes around to accommodate the new block. “It was very frustrating,” Cheng said.

Sophomore Sydney Li experienced similar complications with her Arena process this spring. After glitches during course selection, Li ended up with two math classes, Precalculus and Precalculus Honors, and no history class. This forced her to file incomplete during Arena as she could not select all the required classes. When her counselor fixed her incomplete schedule, her whole schedule was changed, leaving her with classes from blocks 2 through 8. Li had needed 8th block off for sports and had also wanted a lunch, but ended up with neither. Eventually, she dropped AP Biology in order to take a lunch. Although the enforced lunch block policy was implemented with the hopes of decreasing stress, in many cases like Li’s, it has done the opposite. “I was constantly stressed over my schedule for a good three weeks because nothing was working out,” Li said.

All the changes to when courses are offered and who teaches them resulted in several different versions of the schedule circulating, including the Announcer, the Arena program and the actual program uploaded into Synergy. According to Hoffman, this is because there are three separate places that the scheduling data was kept, and last-minute changes were made. “You have to change it in the department schedule, but then we also have to make sure it gets changed in Synergy, and then in the Arena program. And it’s very difficult to keep those things consistent,” Hoffman said. This confusion caused frustration for many students like Cheng, who didn’t know when their classes were offered.

Administration is currently working to implement a new Arena program next year that will help fix some of the current issues, such as incomplete schedules and inconsistencies in the databases. On May 22, a group of Peer Mentors and members of Shield and Scroll met in the third floor computer labs to do a test run of the new program. According to English department chair Meredith Santiago, the system will have an interface for department chairs, which will allow them to move students as Arena is happening, should one of their classes happen to fill up before they can enroll. This should lessen the number of incomplete schedules and the uncertainty that accompanies them. However, this program will not address any issues presented by the new lunch block.

Although the Arena process will never be perfect for everyone, ideally, it will go more smoothly in the fall. “Hopefully next year when they do Arena they could plan it out well so teachers and students have a better way to prepare for what they want,” Cheng said.