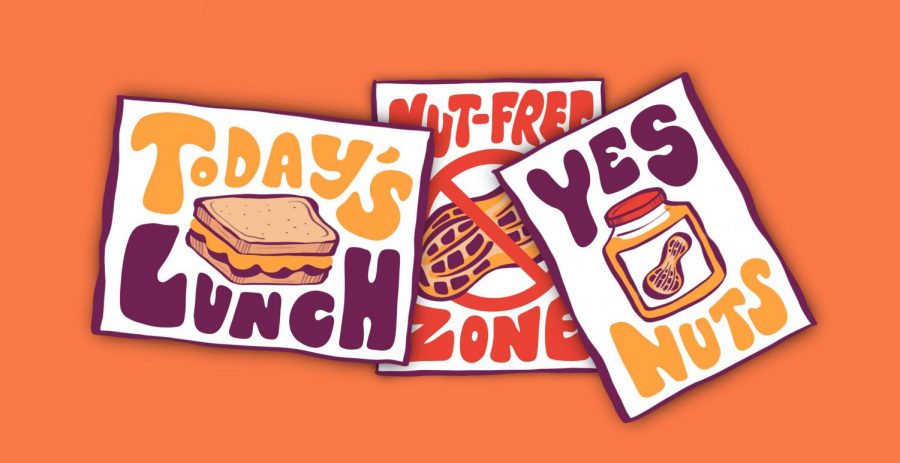 A report by the Centers for Disease Control and Prevention claims that food allergies have increased in children by 18 percent from 1997 to 2007.

It can take as little as 15 seconds for a teacher to announce that a classroom is nut-free. That’s also how much time freshman Nikhita Law has to use her Epipen before she could die.

Law is deathly allergic to tree nuts. Even airborne peanut particles can cause an anaphylactic reaction, where her throat swells and impedes breathing. She is in danger every time she is in the vicinity of a nut product.

“Anaphylaxis can be like 5 minutes and then I’m dead, so it’s very very fast, everyone would have to act quickly,” Law explained. Despite the immediate consequences nut allergies can have, education about them at Lowell has been a slow process, with many Lowellites unaware of students like Law and the policies in place to protect them.

According to assistant principal Holly Giles, Lowell’s current policy is that any student who has a severe allergy is recommended to discuss their medical information with the school nurse, who can then notify teachers on how to manage their classrooms. Additionally, school-wide events that involve food are asked to be nut-free when students with severe nut allergies are present. Because the severity of allergies can vary greatly, the policy is somewhat ambiguous, as every student is accommodated on a case-by-case basis. This current policy feels insufficient to Law, who has only been able to attend Lowell through her mother’s efforts to ensure her safety in her classrooms.

Law is originally from Toronto, Ontario, where nuts are banned in public schools, partly due to a 2005 incident where a student died after nut exposure. However, when Law was in fourth grade, she moved to San Francisco and no longer had access to nut-free public schools. Law and her parents struggled for months to find a school that could accommodate her nut allergy before deciding on Garfield Elementary, which, according to Law, had “some level of a nut policy.”

As a safety precaution, Law’s mother trained all the school staff on nut allergy safety, and put up nut-free signs in every classroom Law had a class in. She did the same at Thomas Edison Charter Academy, the middle school Law attended, as well as at Lowell. “She’s done it so many times at different schools,” Law said. “So she knows what needs to be done.”

Thanks to Law’s mother’s continued efforts to keep her safe, she has avoided any allergic reactions at school. However, she still has concerns about the way nut allergies are treated at Lowell.

Lowell’s large class sizes make nut-free classrooms difficult to enforce. “Lowell is a much bigger school,” she said. “My middle school was actually a K-8 school, and they had like 60 kids in each [grade] so everyone knew me and everyone knew about my allergy.”

In addition to the larger student body, the risk of being exposed to nuts is much higher at Lowell, because there is no designated lunch area for students. As a result, they are allowed to eat in class and around campus. Because of this, Law goes through a complicated routine every day to prevent any dangerous exposure to nuts. She places a “nut-free” sign at every desk she uses and also wipes them down throughout the day, “It takes a little bit of time but it’s better to be safe than sorry,” Law said.

Law’s situation isn’t unique: nut allergies are on the rise among children in the United States. A report by the Centers for Disease Control and Prevention claims that food allergies have increased in children by 18 percent from 1997 to 2007. In a study published by the Journal of Allergy and Clinical Immunology, peanut allergies in children have increased from 0.4 percent in 1997 to 1.4 percent in 2008. According to a survey of 62 Lowell students, 12.9 percent of them have a nut allergy.

Although sophomore Kwynsky Miguel also has a severe nut allergy, she hasn’t been as careful about being exposed to nuts as Law. She says that she has never seriously discussed her allergies with the school nurse or her teachers, instead choosing to advocate for herself by asking classmates to put away certain foods and keeping her Epipen with her at all times. When Miguel first noticed that some of her classrooms were coincidentally nut-free, she was thrilled that there were measures in place for students with nut allergies as severe as her’s. “I was happy because [the administration] knew that there’s kids around here that have allergies that are severe,” she said. “At least I know these teachers know about it.”

Several times since coming to Lowell, fellow students have tried to “test” Law’s allergies. Although most of her classmates are respectful about putting away food when asked, it’s the few instances where students don’t take her allergy seriously that can have potentially deadly consequences. “[Peers testing my allergies] has happened many times, to be honest,” Miguel said, visibly uncomfortable. “Some kids wouldn’t think I was serious about having severe allergies to peanuts and they would stick their peanut butter sandwich to my face and my friends would be like, ‘She’s deadly allergic to peanuts!’”

Although Law has never experienced this form of harassment, she agrees that people need to take allergies more seriously. “I doubt it would happen here because everyone at Lowell is so nice, but some people don’t take it seriously or don’t understand it,” she said.

Although Miguel believes that she is just as responsible as the school in managing her nut allergy, she wishes that the administration was more proactive about making sure Lowell students know about the severity of nut allergies. Giles anticipates future discussions about enacting more policies about food allergies, as the bulk of students with severe allergies have only arrived in recent years. As of now, with no serious complaints or concerns having been raised, Giles, who personally has a nut allergy, has seen no need for a nut ban at Lowell.

As dangerous as nuts are to many students, it is unlikely that SFUSD will take measures as drastic as Ontario’s to completely ban them. Although some schools like Harvey Milk Civil Rights Academy and San Francisco Public Montessori School are nut-free, school nurse Vanessa Compagno believes that a nut ban at a high school like Lowell is unfeasible. “We can’t be an entirely nut-free school,” Compagno said. “Since we have almost 3,000 kids and then almost 200 faculty members, that doesn’t really work, but what we can do is in specific classrooms, we can have those be as nut-free as possible.”

At the district level, the current SFUSD policies in place require all food sold at schools to be nut free, however, many of the food items offered could potentially have traces of nuts and other allergens in them.

Even with all these policies and protocols, students with nut allergies are only safe if their classmates actually follow the rules, which is difficult when some students aren’t aware that they exist. In a nut-free classroom for the first time last semester, math teacher Robert Tran taught and spent a lot of time monitoring his classroom and reminding students not to bring nuts. Although his students mostly stopped bringing them to class, he still couldn’t guarantee that his classroom was always nut-free. “I think the thing I worried about the most is managing everyone.” Tran said. “I made lots of announcements to my classes but someone’s bound to forget or miss out on it.”

In cases where teachers haven’t been as proactive as Tran about enforcing a nut ban, the risk for exposure runs even higher. Junior Sarah Berman, who works as a teacher’s assistant in a nut-free classroom, says that the “nut-free” sign in one of her classrooms is barely visible, which has led to instances when her and other students have eaten nuts without knowing that they were banned. “I know a lot of people make similar mistakes just because there isn’t a lot of advocacy about no-nut policies,” she said.

Overall, Miguel believes that making students understand the severity of allergic reactions and what they need to do to prevent them will prove impactful. “I’m OK with [people eating nuts] because it’s a common thing to eat, but I also want them to be caring about others around them, to know their surroundings and to be sure that someone who isn’t severely allergic is around you,” Miguel said.