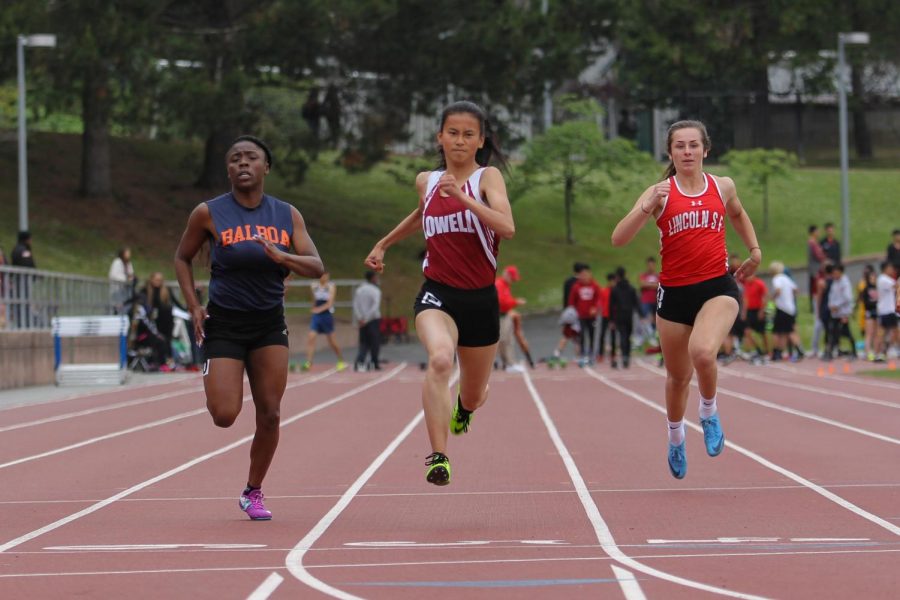 Senior Emily Liu wins first with a time of 12.88 in the varsity girls 100m dash.

The season may have been coming to an end, but the energy and dedication from the track team remained as they prepared for All-City, the last meet of the season. It took place on May 11 at Kezar Stadium. Runners, jumpers, throwers and hurdlers competed in this meet, which determined who made to the finals.

In the running events, Lowell came in first in almost each race, with amazing representation from varsity senior Noah Battaglia, running a 4:34.99 in the 1600m race, and sophomore Dakota O’Brien running a 54.87 in the 400m dash, placing both of them as the first seed for each of their events. Sophomore Brianna Grissom ran an outstanding 1:00.32 in the 400m dash, placing her as first overall. According to Grissom, she was at first not so confident in her time, but she has now guaranteed herself a spot as the first seed at All-City finals.

In the field events, Lowell had some great representation, but fell short compared to the Lincoln Mustangs, their biggest competitor. In the varsity boys discus throw, Lincoln athletes took up the leaderboards pushing senior thrower, Trevor Louie, down to fifth for Finals with a throw of 93-11.00. Lincoln snatched the first and second seed, pushing Louie to third with a throw of 35-08.50. Sophomore Jack Cost placed first in the frosh-soph discus throw finals, with a 97-07.00, throwing over 10 feet further than the athlete in second place. Cost does admit, though, that Lincoln showed some tough competition. “Lincoln always has good competition,” he said. “Because Lincoln recruits their football players, they tend to be bigger and stronger. So if you want to do well you have to throw well.” With that in mind, Cost took his determination to the field and gave it his all and, despite the harsh competition he foresaw, took home the win.

Along with the wins, came the setbacks. According to head coach Andy Leong, the team faced a few issues, including false starts and disqualifications. This may have brought some spirits down, but the team remains in good shape and form to compete at All-City finals. Despite this meet bringing some tough competition and unexpected setbacks, Leong remains confident in the team’s ability to do well at All-City finals.

The runners may be nervous about the tough competition Lincoln puts up, but that doesn’t stop them from bleeding sweat and giving it their all, in preparation for the finals that they’ve trained so diligently for.

All-City finals took place on May 18 at Kezar Stadium in the pouring rain. Some field events were postponed to May 20 at Lowell due to the conditions.