What they don’t tell you about getting injured: Sharing my experiences 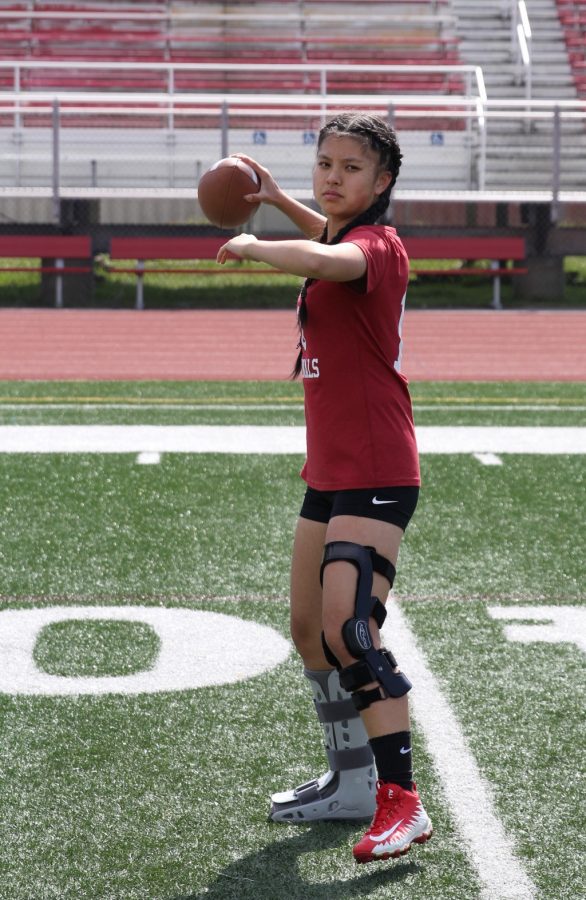 Junior Susan Wong shares her experiences of getting injured and recovering.

Pop! It sounded like popcorn, but it didn’t smell like popcorn. It smelled like rubber turf and it felt like my leg snapped. I dropped the football, fell to the ground and my left knee went weak. Immediately, I grabbed my knee and hugged it as tight as I could against my chest as I rolled around on the field, screaming. I thought I was dreaming. What just happened?

I was too naive to realize how serious my injury was. As I took the bus home, I was under the impression that it was just a sprain, and I thought that I would be able to return to the field in a week or two. The next day, I woke up feeling very wobbly. It felt like my knee was going to give out — I couldn’t even take a single step without dragging my leg across the floor. My knee was so swollen that you could barely make out the actual shape of a knee, so I waited all day for my dad to come home to drive me to the emergency room. They took an x-ray and told me I hadn’t broken any bones, but they recommended me to get a magnetic resonance image (MRI) to find the true source of my injury.

After getting an MRI and visiting various medical professionals, I was finally given the diagnosis: I completely tore the anterior cruciate ligament (ACL) and partially tore the meniscus in my left knee. I was given two options: I could have surgery to reconstruct my ACL or go to physical therapy (PT) to work towards rehabilitation, which meant I would not be able to play contact sports anymore. I broke down crying because my mom was very against me having surgery. She didn’t like the idea of my body being cut open, even if it was only an arthroscopic surgery, which is a type of surgery that only requires small incisions. In my case, there were three total incisions.

Eventually, I convinced my mom to let me have the surgery to “fix” my knee by telling her that I was still young, and that at the age of 14 I would be able to recover pretty quickly. My injury was a common one — every year in the United States, about 100,000 people sustain the same surgery as mine. I wanted to get the surgery done as soon as possible, so that I would be able to return to flag football next season fully recovered.

Two weeks after the day I got injured, I arrived at the surgery center at 11 a.m., starving and thirsty because I wasn’t allowed to eat or drink anything after midnight, the night before. I woke up from surgery with a huge knee brace and bandages wrapped around my leg. Since I was put under anesthesia, all I wanted to do was sleep. When I left the surgery center, my entire left lower body was numb from my hips to my toes. In addition to being numb, all of the muscles in my left leg seemed to have disappeared, the circumference around my left calf and thigh were inches smaller than my right side.

Playing sports is a huge part of my identity, and I didn’t want to let this injury stop me from doing something I love. Ever since middle school, I would have sports practice everyday after school; it became a part of my daily routine. Once I got injured, I didn’t know what to do with all the extra time that I had, so I would go to practices and games and watch my teammates from the sideline. I felt very hopeless that I couldn’t play and couldn’t help my team. I was also very frustrated because my entire mobility was limited. I was determined to continue playing after this injury.

After a couple of weeks, I began attending weekly sessions of PT. I didn’t think that they would make that big of a difference in my recovery, so I didn’t do the exercises my physical therapist prescribed for me to do at home as much as I should have. Whenever my physical therapist would ask me to show her the exercises, I would struggle. Looking back, I think that I could have recovered faster if I did those exercises consistently.

At the beginning of the new school year, I had to get my physical done to play sports and my parents, who were very worried I would get injured again playing flag football, were hesitant to sign the forms. Truthfully, I was scared to tear my ACL again, which I knew was a possibility. I didn’t want to go through the whole process again. Once was enough. But I still really wanted to play, so I convinced my mom that I wasn’t going to get injured again and she hesitantly signed my physicals.

That numb feeling that I previously mentioned actually stayed in my leg for about a year. Every time I touched the side of my thigh, there was this fuzzy vibrating feeling. It made me think I was never going to truly recover.

In October of 2016, I finally reached full recovery, which meant that I could return to sports and the circumference of my legs were the same for the injured and uninjured knee. Unfortunately, full recovery didn’t mean pain free. I’m still suffering consequences from this accident, such as the occasional knee pain from standing for too long and discomfort after long workouts.

After what felt like the longest seven months of my life, I started running again and competing in cross country meets. Even though my times were minutes off of what I ran my freshman year, I strived to get better each week and continued to increase my mileage. After cross country, I had about a month before the spring sports season started, so I became more consistent with my prescribed exercises to condition for flag football.

One year after the injury, I was still sort of hesitant to play because I would have to wear a knee brace to be able to play the sport, which made me uncomfortable. Because I knew flag football was actually a contact sport, I deeply feared another injury.

However, I knew I was getting stronger and faster as time flew by, and even though I had lost my position as starting quarterback, I still continued to work hard to develop skills for next year.

This may shock a lot of people, but I am quite thankful of the journey that I had to go through after tearing my ACL because I learned a lot. Not only did I learn about the anatomy of the knee, but I learned how to push my body to the limit and to not give up. As cheesy as this may sound, there’s always light at the end of the tunnel. It always gets better in the end.
Injured again?
I truly thought I hit rock bottom when I tore the ACL and meniscus in my left knee in March of 2016 playing flag football, but boy was I wrong! About two years later, on Feb. 28 of 2018, I collapsed in intense pain after an unfortunate collision with a teammate, which left me gripping my right ankle, unable to stand up. I later found out from the doctor that had I fractured my right fibula, and that I would need surgery to put a metal plate on the side of my fibula and six screws would be drilled into my bone. When she told me this, I had never been so devastated in my life. How did this happen to me twice in three years in the same sport? It was two days before the first game of the season, and it felt like everything I worked so hard for last year was thrown away.

This was supposed to be my comeback year, when I was completely recovered from my injury. I was days away from the two-year anniversary of my ACL injury and I was ready to come back and play better than ever. But obviously, that did not happen.

This time around, I was no longer thankful for my injury and the mishaps it caused me. I was furious, angry and extremely devastated. I couldn’t believe that for the third time in my life, I would have to learn how to walk. My doctor said that I could start walking in six weeks and running three months after the surgery. That meant I was out for the whole season. Not just the flag football season, but also track and field, meaning that I would only have senior year left to prove my abilities. This time around, I didn’t want to waste any time. I got really lucky: my surgery was scheduled only five days after my injury. I knew that I had to stay on top of my PT exercises and keep working out because I desperately wanted to get back on my fee.

In the end, I started walking five weeks after my surgery and began running two and half months after my surgery, which is faster than the average recovery time. Because this was the second time that I suffered from such a major injury, I was smarter about taking care of myself. Lucky for me, I had a wheelchair, so I didn’t have to crutch around in rainy weather, which was a huge hazard considering the crutches would slip and I could fall.

I think for the rest of my life, my knee will bother me more than my ankle because ligaments never heal by themselves, which is why they took part of my hamstring to reconstruct my ACL. Bones, on the other hand, will heal, and that makes me so much more ready for next season. My surgeon even told me that my right side (ankle injury side) is doing better than my left side (knee injury side).

When the doctor told me the recovery times for my injury, I set a goal for myself: I wanted to come back at the end of track season to throw discus and shot put. Spoiler alert: I did end up throwing and even hit a personal best for shot put. I worked even harder, going to the weight room after school to workout, even when I was on crutches.

It’s been about three months since I injured my ankle, and I’m still going to PT. Currently, my physical therapist says I am not ready to go back to playing flag football, but I still have a bit less than a year before the season starts, so I’ll be ready to go. I know my parents really do not want me to return to playing football, but because of my stubbornness or my unwillingness to give up, I will definitely be on the field next season. Next season, I want my team to make it all the way to champs. From my journey, I learned that the harder you work, the better the outcome. In the moment, it may seem like you will never get better, but you can’t give up.