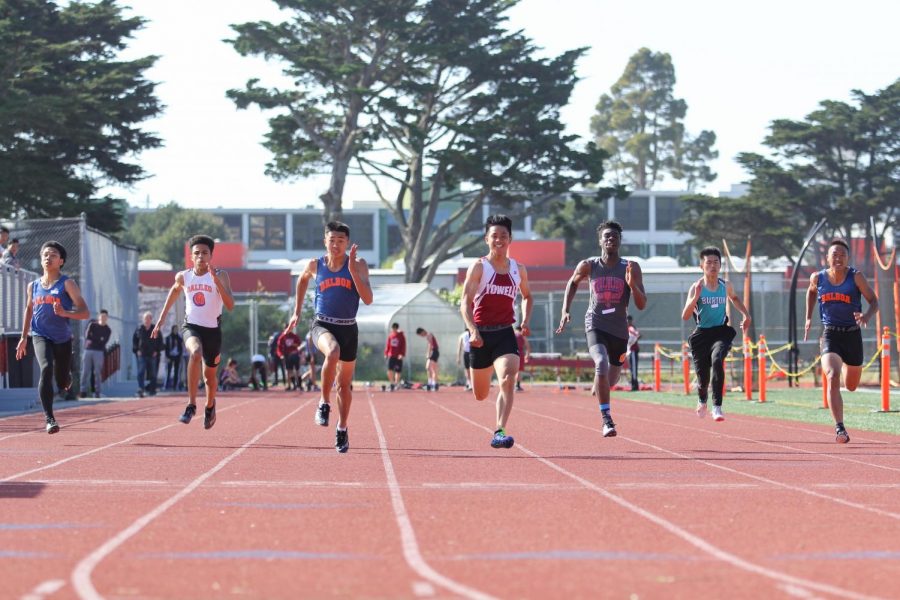 Senior sprinter Jovin Cheung wins the varsity boys 100m dash with a time of 11.16, .15 seconds faster than the next time.

On May 2, Lowell hosted their last regular track meet of the season against the Galileo Lions, the Balboa Buccaneers, the Burton Pumas, and the John O’Connell Boilermakers. At their last home meet of their high school track and field careers, the 15 Lowell track seniors were met with individualized posters strung up along bleachers. They were filled with encouraging rhymes and phrases from their time on track, such as “Susan Wong is Hella Strong” and “Iryne will Beat Chu.” “These posters are just some fun thing we would do for the seniors since this is their last meet before All-City,” said sophomore sprinter Weijing Li. “So, kind of like an early gift before they leave.”

Many seniors were filled with great sadness as they came to terms with this meet being the last before All-City. “It’s honestly the saddest thing ever,” senior co-captain and sprinter Emily Liu said. “I’m gonna miss this,” said senior co-captain and sprinter Jovin Cheung. Even underclassmen who didn’t get to know the seniors too well were heartbroken at their farewell. “I feel really sad,” Li said, “I mean, I haven’t talked to them a lot of times, but they’re like a distant relative to me.”

When looking back on their time on the team, most seniors found the experience to have gone by very quickly, almost too fast. “All the meets have just gone by so quick, you take it for granted,” Cheung said. “Honestly, it felt like everything came by really fast. I did not expect everything to end right now,” Liu said.

With most starting their track careers in middle school, seniors will be giving up a passion they’ve had for up to seven years. Though most seniors don’t plan to continue track and field on a team in college or thereafter, some like Lawrence and Lei plan to continue it in club track. Greenhill added that she believes club track will help her find community when she goes to college on the East Coast. The only exception is Noah Battaglia, who will be running on the track team for Claremont McKenna College.

Many seniors found that participating in track genuinely improved their time at Lowell, whether it was by giving them a sense of community in such a big school, or by being a stress reliever from all the homework and tests. “The team gave me a sense of belonging here at Lowell,” said Greenhill. Lawrence, Cheung and Louie expressed similar sentiments. Lei believes track benefitted him the most by helping him deal with stress. “Sometimes going on a run just takes you away from school stress and homework and whatnot,” he said. Louie agreed by saying, “Throwing is a great stress reliever.”

Other ways track had benefited outgoing seniors was by teaching them proper health and nutrition, along with perseverance. “[Track] teaches you to just be really strong to push through all the work you have because eventually, you will get it done, it’s just a matter of how much will power you have in you,” Liu said.

Although a common assumption about track is that it is primarily an individual sport, many seniors feel otherwise. “[Track gives] a feeling of satisfaction when your collective efforts go towards something like a championship,” said Lawrence. One of Greenhill’s favorite memories was succeeding in an event she had plateaued in then seeing one of her teammates be so happy for her achievement. “One of my teammates came running across the field with her arms open and she was so happy for me, like showed real genuine joy for my success which meant a lot,” Greenhill said. When asked what their favorite memory from track was, most seniors had similar stories of feeling happiness through the community that track provided.

Even though it is very sad for the outgoing seniors, they look forward to All-City and what their team will accomplish after they’re gone. “I’m really proud of my team and they’re going to do great next year without me,” Louie said.