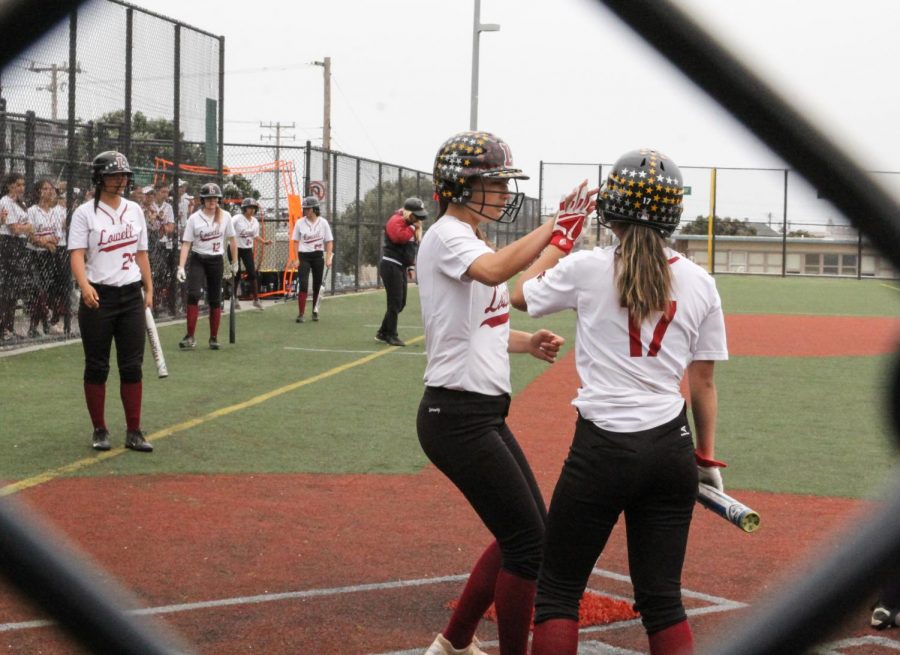 The varsity softball team destroyed the Galileo Lions in a 16–0 shutout game on April 25 at South Sunset Field.

After being defeated 10–3 by El Camino on April 22, the Cards came back and won 4–1 against Washington on April 23. Just two days later, the girls returned to the field with a newfound sense of confidence and an emphasis on a tight-knit team effort.

The game began as sophomore pitcher Ella Jordan pitched the first ball. After a Lion got a hit, Jordan intercepted the ball and threw it to junior first baseman Luxi Arnold who immediately tagged her out. Following a strikeout, Arnold caught a fly ball, ending the top half of the first inning.

During the bottom half, two Cardinals were walked and both were able to steal home within three more pitches. Then senior Ella Gibson hit a triple that turned into a home run due to Galileo’s catcher mishandling the ball. Before the inning was out, junior Samaa Rasheed scored a run, putting the Cardinals up 4–0.

In the second inning, the Cardinals continued their scoring streak with continuous runs, stolen bases and the occasional hit far out into center field which would send two to three players sprinting home at a time. The other girls in the dugout cheered on their teammates as they slid into home base one after another. “We’ve been helping to boost each other up a lot and give each other encouragement,” Jordan said. “To make sure we’re backing everyone mentally and physically.” This seemed to work, as Lowell added another 12 points to their tally.

With Lowell leading 16–0 at the start of the third inning, it was up to the Cardinals’ defense to keep Galileo from scoring and protect their blowout score. Jordan did just that, throwing three consecutive strikeouts. The game was over.

By securing their spots for playoffs as the first seed in the league, the Cardinals set themselves up for a promising chance of making it to the championships. “We’ve already clinched the spot in playoffs, so I think it’s a pretty good chance we’ll make it to champs this year,” Jordan said. “I think we’d do pretty well.”

The Cardinals defeated the Balboa Buccaneers 15–0 in another shutout game on May 2 at South Sunset Field.