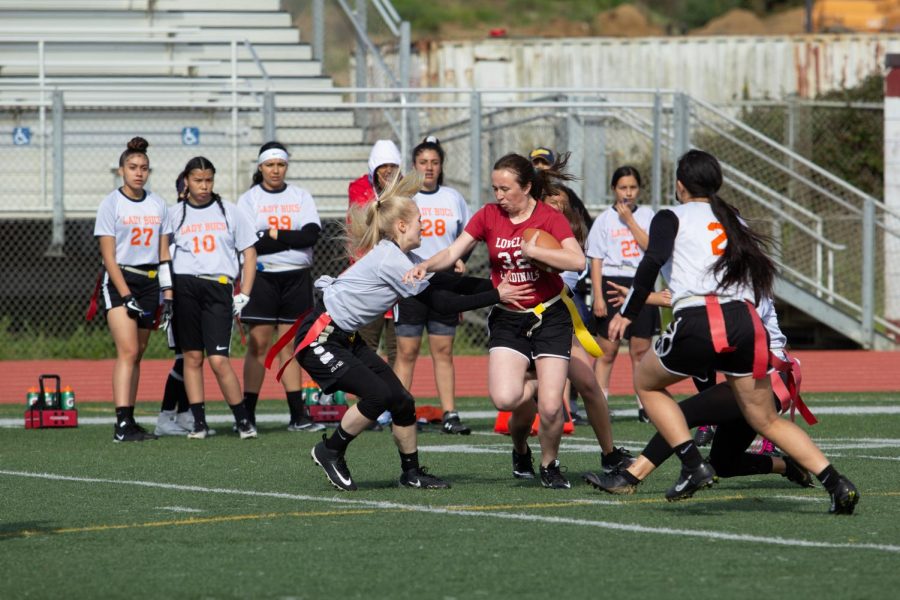 Sophomore Madalynn Schmitt pushes through a few Balboa defenders during a playoff game against the Balboa Bucanneers.

Emotions ran high after the Cardinals lost their playoff game against the Balboa Buccaneers 0-13 on April 16 at home. This ended their long run as top contenders for the AAA Flag Football championships, finishing off in second place in the league with 8 wins and 2 losses.

Lowell’s head coach, William Woodruff, expected the Cardinals to score early on in the game and maintain the lead, given that they had won their previous game against Balboa. However, the first quarter started out slowly, with both teams focusing on maintaining a strong defense. At one point, the Buccaneer’s quarterback threw a long pass within 10 yards of the endzone, but the Cardinals’ defense was able to pull the receiver’s flags off in time, preventing a touchdown. After this, no side gained significant yardage, ending the quarter at 0-0.

During the second quarter, the Cardinals fought hard to keep their position on the field but the Buccaneers were able to run the ball down to the end zone and score a touchdown, as well as the one-point conversion. The second quarter ended 7-0.

Although the Cardinals were unable to score throughout the game, Woodruff felt that his team handled their emotions well and stayed focused on the game. He believed that they still had a chance during the fourth quarter. However, he says that the team suffered “backbreaking turnovers” and the Cardinals were forced to take risks that ultimately cost them. In the last two minutes of the game, the Buccaneers scored another touchdown, winning the game 13-0 and ending the season for the Cardinals. Senior co-captain and linebacker Ericka Liu recalled the emotional last two minutes of the game. “I think for me and Arlynne [teammate]  because we’re seniors, even though we knew there was no chance of winning, this [was] our last two minutes on the field and we fought so hard and played so strong,” she said.

After a round of high-fives and congratulations to the Buccaneers, the Cardinals huddled for their post-game meeting, where Woodruff compared the team’s season to climbing a mountain. “Should you fail to reach the summit, it’s hard to do anything but stare up at the peak and see failure,” he said. “However, it’s important to turn around and look at how far you climbed. We accomplished so much this season going 8-2 and entering the playoffs as the second seed.” He also encouraged them to work on building themselves up not only physically but mentally.

For many of the Cardinals, this was their final game, not only for the season but for the rest of their high school careers. The seniors got emotional while reflecting on their years on the team as the reality of their season being over fully set in. Although they lost, they are proud that they were able to beat their longtime rivals Galileo and Lincoln for the first time in team history. Liu notes that the Cardinals have been climbing “higher and higher in the stats every year,” and senior co-captain and quarterback Susan Wong has noticed a gain of respect from both the Lowell community and flag football teams from other schools, as well as the general growth of flag football as a “real sport” around the country. It’s notable to add that the team has grown from its original team of 17 players with hand-me-down basketball jerseys to 44 players with new gear and equipment over the span of four years. Senior co-captain and running back Michelle Huang agreed with Wong’s sentiments. “As [flag football] progressed it became more nuanced and more complex, like grown up,” she said. “The team’s grown up and I’ve grown up along with it.”

Senior co-captain and middle linebacker Arlynne Policarpio will miss “suffering together” with her teammates, who are like family to her. Huang mentioned the strong commitment of her fellow players. “That’s the mentality of a lot of seniors,” she said. “Everyone just goes to school just so they can go to practice.”

The seniors encourage returning and future team members to not be discouraged when they graduate. They see a lot of gifted players and want them to “keep that passion and dedication for the team,” Huang said. She explained the team started “from scratch,” and hopes that new players understand how much effort it took for the team to become the top contenders that they are today.

Woodruff believes that the Cardinals need to prepare themselves more before games.  “Our losses happened well before we set foot on the field on game day,” he said. However, he remains optimistic for next year as he’s seen great potential in his new athletes. “Moving forward, Lowell will be a playoff contender every year, and in seasons where we get that magic combination, we’ll win the championship.”