Lady Cards triumph over the Mustangs 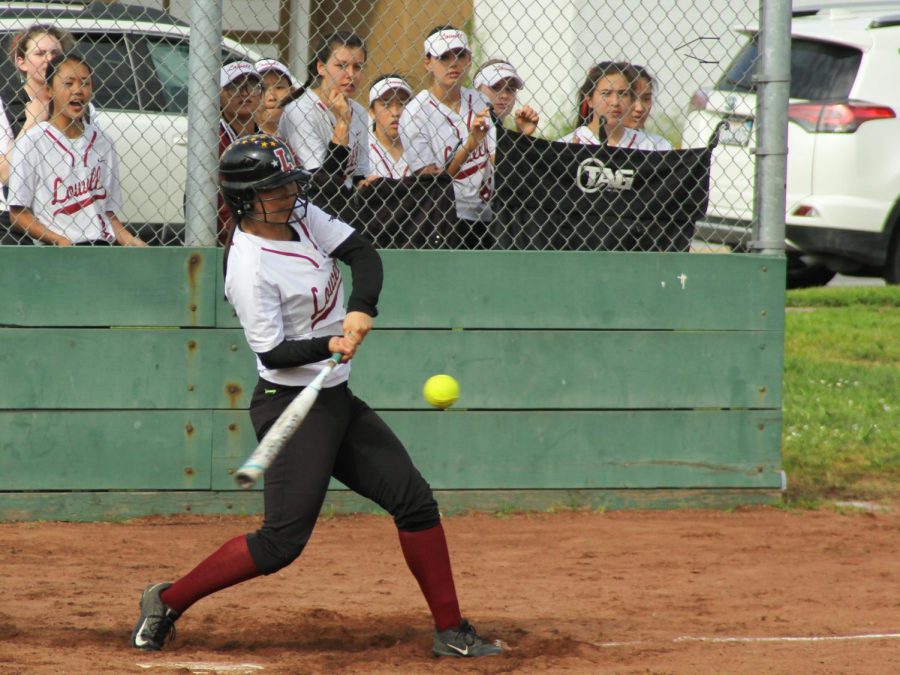 Senior third baseman Emily Jiang swings as her teammates cheer her on.

After a 25-4 win against the Lincoln Mustangs on March 12, the varsity softball team defeated the Mustangs once more, with a 13–4 win on April 4 at Parkside Square.

The inning began as sophomore pitcher Ella Jordan stepped up to the mound, pitching swiftly at the plate. After Lincoln scored a run in the top half, Lowell stepped up their offense in the bottom half. Senior catcher Ella Gibson hit a solid double, allowing her teammates to score two runs as the Cards lead 2–1.

Both the Mustangs and the Cards scored a run each by the end of the second inning. Each batter stepped up to the plate, as players standing in the sidelines enthusiastically cheered on their teammates. After Gibson had another solid hit, senior second baseman Eunice Go was able to steal several bases and sprint home, bringing the score up to 3–2.

Throughout the rest of the game, the Cardinals maintained an ample lead ahead of Lincoln, with outfielders catching fly balls. The game began to pick up pace during the fourth inning. Jordan continued to fire steady strikeouts during the top half. As Lowell stepped up to bat, head coach Sascha Taylor-Ray reminded the team to hit hard while batting. “I need you to swing like you mean it!” she urged on.

With these newfound words of advice, freshman utility player Niko Arnold stepped up to bat and hit a single; sophomore utility player Ivy Zip followed with a double. Two more points were added to the scoreboard. Due to an error made by the Mustangs’ catcher and a single hit by freshman outfielder Fiona Candland, two more players made it home, bumping the score up to 7-2 by the end of the fourth.

With hopes of ending strong, the Cardinals pushed through during the sixth inning. Though the Mustangs picked up pace and scored two more runs, the Cardinals ensured a powerful offense with a hitting streak, scoring six additional runs.The final inning ended quickly as Jordan proceeded to throw straight strikeouts, resulting in a 13–4 win for Lowell.

Though not their finest game according to Taylor-Ray, the Cardinals were able to show their strengths. Jordan, who despite walking a few players, came back in to throw in 12 strikeouts. “It’s really hard to be out there on the mound by yourself, and I thought she did a great job,” Taylor-Ray said. Additionally, she recognized Gibson for solid at-bats, along with Candland.

Taking it one game at a time, the team never tries to get ahead of themselves or take any other team for granted, as “every team in the city wants to beat Lowell,” Taylor-Ray said. “[When] you know the other teams have lost to us, they’re just coming right for us, so we have to remind ourselves that that’s what’s going on and we have to work hard.”

The Cardinals faced the Lincoln Mustangs a third time on Thursday, April 18 at Parkside Square, winning a 20-0 shutout game. The Cards play the Galileo Lions on April 25 at South Sunset Park.