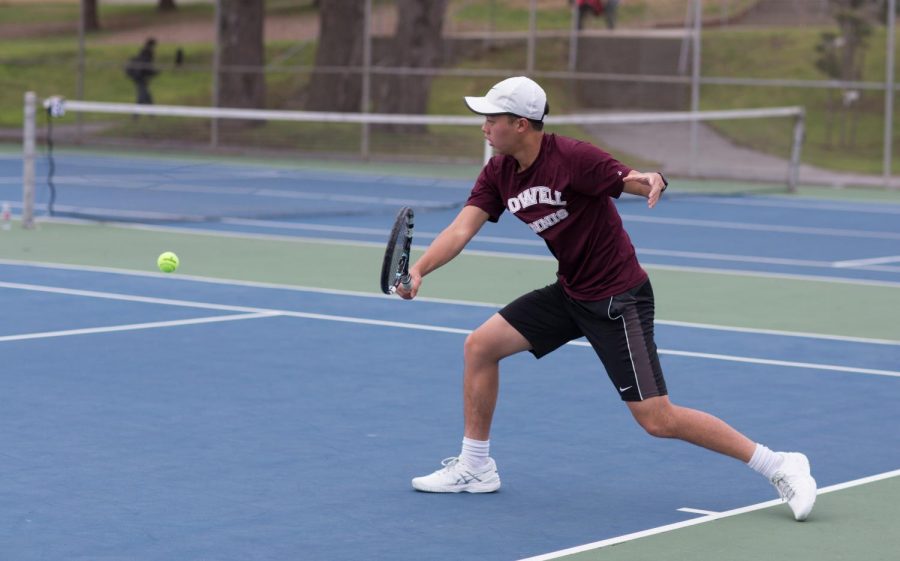 Senior Andrew Trinh, who won his doubles matches against the Archbishop Riordan Crusaders on April 5 at home, performs a backhand shot.

The boys varsity tennis team destroyed the Archbishop Riordan Crusaders 7-0 on April 5 at Lowell, maintaining their undefeated streak in the Academic Athletic Association league and continuing down the path to winning their 11th consecutive AAA Tennis Boys Annual championship.

Partners Ng and Wong felt that they were well-matched with their opponents. “It was easier than our previous [matches], but we did have some rallies going,” Ng said. “I think [our opponents] played fairly well.”

During their match, Ng and Wong aimed to balance their aggression with caution and not to get ahead of themselves. “We tried to play aggressive but not out of control,” Wong said. According to Ng, the two worked on consistently “getting the ball on the other side of the court, but also waiting for an opportunity to put the ball away.”

The team has an impressive winning streak, but the athletes want to ensure that their performance stays even-keeled even if their victories seem to come easily. “We’re able to take the game seriously even though we might be laughing and smiling and joking around sometimes,” said Ng. “We know what’s at stake, we know we have to play hard and challenge our own skills.”

The next match will be against the St. Ignatius Wildcat at 3:30 p.m. on April 25 at Lowell.