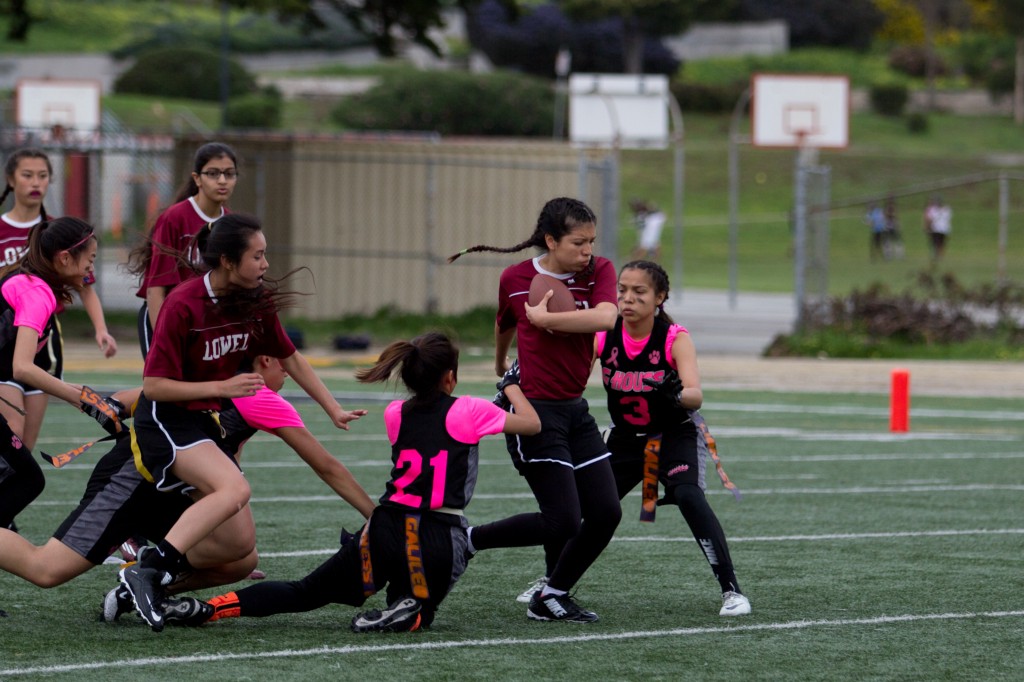 Freshman Paola Dominguez wrestles through the Galileo Lions’ defenders in the game on March 9. Photo by Chris HackettThe girls huddle on the field and wrap their arms around each other, talking quickly. They’re wearing similar hairstyles and hand-me-down jerseys from the girls’ basketball team. They break and seven of the girls get into position while the rest return to the sidelines to cheer on their teammates.

This is what a typical game began with for the girls’ flag football team, the newest addition to Lowell athletics. The Cardinals also join a fairly new league in the city that started in 2012 with the Lincoln Mustangs, Mission Bears, Balboa Buccaneers, Burton Pumas, and Galileo Lions. The league now has seven teams after Washington joined in 2015.

Even though they lost their first match against the Mission Bears 36–12 on March 2, the girls were still proud. “We were able to score some points which I thought wasn’t going to happen,” junior Widya Batin said. “Our coach was really proud of us and said we exceeded his expectations by scoring two touchdowns.” The team’s passion and drive have been shown game after game.

“Our coach was really proud of us and said we exceeded his expectations by scoring two touchdowns.”

The second time the girls faced the Bears was on April 6, their final game, and the Lady Cardinals won 13–12 in overtime. This time the girls were much more comfortable and worked better together. They also had more time to work with their coaches and perfect their plays, so they felt more prepared. “We worked on keeping the other team’s score down by doing flag pulling drills, working offense versus defense to really get the plays down,” Smirnov said.

From the very beginning the team has exceeded expectations. The girls finished the season with a record of 2–10 and tied for fifth place with the Washington Eagles and Mission Bears in the AAA league.

Juniors Widya Batin, Tatianaevelyna Ahoia and Tsia Nicole wanted to be on a flag football team at Lowell since their freshman year but saw nothing come out of the petition they signed expressing interest in the team at the time. So Batin decided to take charge and passed around her own petition this year to restart the process. Athletic director Robert Ray said that she would need at least 16 names on her petition to prove that there was significant interest at school to get a team started.

Commitment to the sport is crucial when starting a team because once a school joins the Academic Athletic Association (AAA) league, that school’s team is included in the season’s schedule and is expected to attend all matches. So Batin scrambled to find the girls who had previously signed petitions expressing interest in the hopes of finally creating a team. “The beginning process was kind of weird, because it was student-run and we didn’t have anyone to support us,” she said.

“The beginning process was kind of weird, because it was student-run and we didn’t have anyone to support us.”

The team also needed practice space, uniforms and a coach, who is most important to form a team, since all teams need a leader and supervising adult at all practices and games. Becoming a coach is no easy task either as it requires many qualifications, such as CPR, First Aid and concussion certifications.

Security guard Gwendolyn Hinkle stepped up after principal Andrew Ishibashi asked her if she was interested in coaching. After doing multiple online courses for weeks she coached the team for a month and played a vital role in starting the team, according to Ray.

After a couple weeks Hinkle was replaced by Bill Winderoff, a flag football coach who is part of a league on Treasure Island. “Tsia and Widya came out [to Treasure Island] … and all of us in the Treasure Island league were so impressed with their initiative and drive to put together a team and seek a coach that I did my best to come out here and help,” Winderoff said. 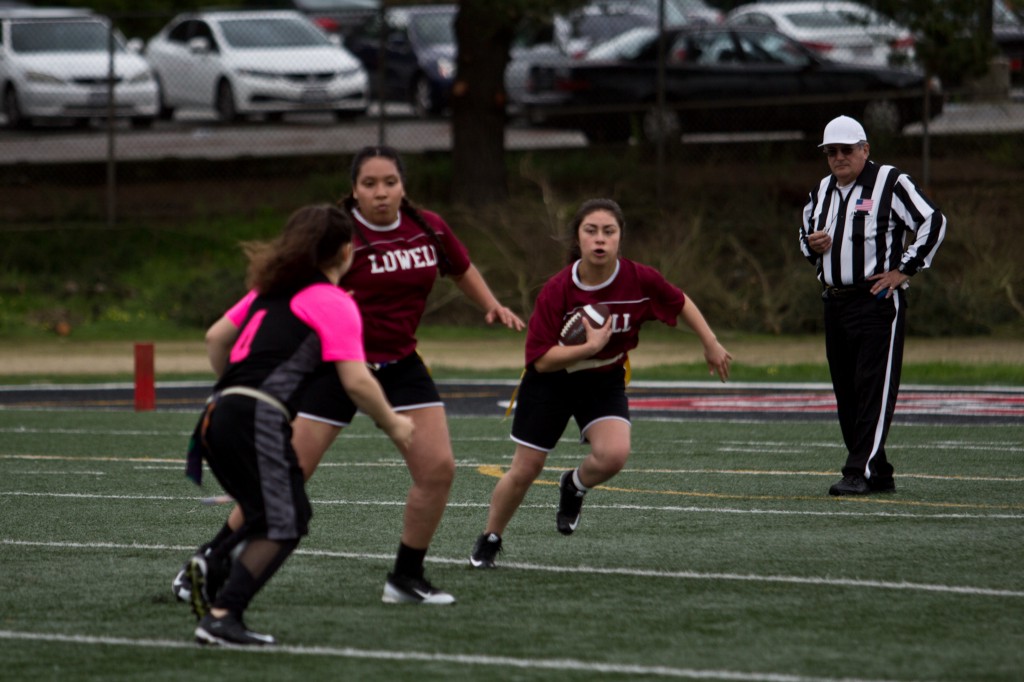 Junior Raina Serrano runs with the ball on the field in the game against the Galileo Lions on March 9. Photo by Chris HackettGirls in Football

Girls have joined the football team in the past but did not stay on the team for long. Senior Olivia Scott was only on the football team in her freshman year as a running back and quarterback. Despite being on the team for only one season, she found it to be a rewarding experience. “It was fun and I really liked it and was pushed athletically… but sometimes the coaches didn’t know how to act around girls being on the team,” Scott said.

Physical contact was a major factor that pushed Scott and other girls away from playing football. According to Scott, many football players were injured throughout the season. Scott’s concern about football injuries is justified. A study conducted in October 2013 by the National Academies of Sciences, Engineering, and Medicine revealed that high school students are twice as likely to sustain a concussion than college football players.

The contact that some girls were so worried about is reduced in flag football.

The contact that some girls were so worried about is reduced in flag football. They wear belts with flags on them and the flags are pulled in lieu of tackling each other and other rough contact, like blocks and tackles. Also, once a ball is dropped, it is considered dead rather than a fumble so that players do not pile on each other trying to recover the ball. All other rules are the same as football, such as the four downs allowed before the ball changes position.

Despite these differences from football, the girls realized that contact is inevitable. There were multiple injuries this season, like those sustained by freshman Susan Wong, who tore her ACL and had to be taken out of the game against the Galileo Lions.

Some girls like sophomore Yunah Smirnov had prior football experience before she joined the team, but Smirnov still finds that playing flag football is a learning experience for her and all of the girls. They all get the chance to rotate their roles until they find what works best for each player and the team as a whole, according to Smirnov. “It’s really interesting to learn together as we play together,” she said. “It’s a lot of work, that’s the way it’s been throughout the whole process, but I love pushing myself and knowing I was getting better with everyone else.”

Practices are every day except Saturday and are run by head coach Winderoff as well as members of the varsity football team. Senior Tony Ahoia has helped the team since the beginning by teaching the girls plays similar to the ones he learned on the football team. “I wanted to get involved because I was really happy with my varsity football experience and I wanted to share my experience with the flag football team,” he said, early on in the season. “The girls have been really open to me and they’re a strong team… Because they’ve had so little time to practice it’s hard for the girls to memorize all these plays, but once they get that down things will get better.”

The girls saw the effects of having little practice time in their game against the Galileo Lions on March 9. The Lions scored two touchdowns in the first quarter, and another two in the second quarter before Wong was injured and had to be taken out of the game. The Cardinals were able to intercept the ball during the fourth quarter, but lost the ball to the Lions who went on to score again and finish the game 33–0. The loss was tough, but the girls were ready to get back on the field and practice hard the next day.

With drills and a lot of conditioning, the girls got better and faster. “We started to work on it at practice bit by bit, snapping, blocking, and passing to create a better and complete team,” Smirnov said.

The huge commitment and effort the team puts in started to pay off. The team scored points almost every game and won their first match against the Washington Eagles 19–18 in double overtime on March 23. “We won today [March 23] because we started using more passing plays that worked, and our receiving got better,” Smirnov said.

“At the end of the day this is still our team that we founded, and that’s a lot to be proud of.”

Winderoff has seen the improvement too. Though the girls only practiced with him only three times before their first match, he has noticed progress since day one. “It’s been a long road to get the team in shape, but it’s been progressing exactly as I anticipated,” he said. “It’s disappointing because they want to win games but there’s no way to win the games until you know what to do. The team has a lot of heart — they come out here fighting and they’re very enthusiastic and are a great bunch of people who are a lot of fun to coach. The drive and initiative they’ve shown in putting together a team is great, so if we can build a strong foundation then I suppose it will have been a successful season.”

They went from a group of girls who just wanted a football team of their own to an ever-improving team with a proud head coach and a strong team bond. “At the end of the day this is still our team that we founded, and that’s a lot to be proud of,” Batin said.