Your Freedom Is False 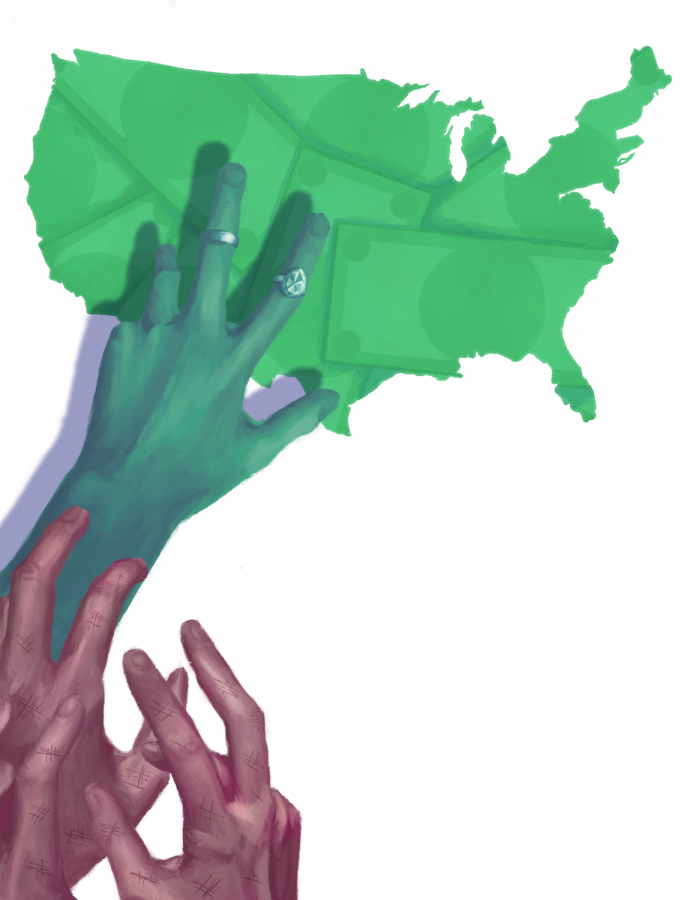 Freedom is a big word.

If you turn on the news, something you will often hear the talking head boast about is how we live in an open, free society. We’re protected from evil foreign dictators by our military, and from dangerous radicals by our police. The brave men and women in ICE keep out the swarms of immigrants, and our free market allows innovative entrepreneurs to advance our society ever further. No other country is as great as America, the shining example of democracy that the whole world looks up to. Those who dare to criticize anything about this flawless society almost immediately face the accusation of “hating freedom.” But what does that actually mean?

If you believe the narrative, freedom is simple. Freedom is Liberal, the freedom for gay people to get married, for a black man to be president, the kind where anyone can be anything with enough Tolerance. Or, alternately, Freedom is American, God-given second amendment rights and always successful free-market capitalism, the kind where anyone can become anything with enough Hard Work. The myth of the American Dream at its finest. What else could there be?

In Colonial times, the United States was a very class-divided society. From 1687 to 1770, the richest one percent of Boston went from owning a quarter of all wealth to just under half, according to American historian Howard Zinn, citing an analysis of Boston tax lists. During the same period, the poverty rate doubled to include nearly a third of the population. High-profile events where aristocrats would grant personal friends millions of acres for the paltry price of 30 shillings a year occurred while 50 percent of servants remained landless (and thus voiceless) after ten years of freedom from their indentured servitude.

From Bacon’s Rebellion in 1676 to 1760, there were 18 insurrections with the intent of overthrowing colonial governments, along with six black rebellions and 40 riots of varying origins. Meanwhile, the profits of wealthy merchants were threatened as Britain began to take advantage of the vast wealth tied up in trade via taxes. The solution, though not entirely conscious, came to be a masterstroke–stir the resentment of the colonists and direct it toward Britain; direct the wrath of the masses toward an easy scapegoat.

But even this universal rhetoric of the grievances laid before Britain was filled with the fears, prejudices and desires of the ruling class. Indeed, the Declaration itself charged King George with inciting domestic revolts and Indian attacks, great fears of the ruling class at the time.

Zinn, in his work A People’s History of the United States, had this to say: “In America, too, the reality behind the words of the Declaration of Independence (issued in the same year as Adam Smith’s capitalist manifesto, The Wealth of Nations) was that a rising class of important people needed to enlist on their side enough Americans to defeat England, without disturbing too much the relations of wealth and power that had developed over 150 years of colonial history. Indeed, 69 percent of the signers of the Declaration of Independence had held colonial office under England.”

So why is this important?

The history of freedom is one of ideology. The American Revolution (and, by extension, the state it created) was never about “freeing” everyone from the tyranny of British rule, it was about preserving the status quo and allowing the wealthy of the time to continue making their profits unmolested. It was used to justify the preservation of a society where the rich solidified their holdings while countless people starved in the streets, and indict the poor for “not working hard enough.”

Now let us examine the current state of affairs. According to the U.S. Census Bureau, of the 330 million residents of the U.S., 40.6 million (about 12 percent) live below the poverty line, which is a total annual income of $25,000 for a family of four ($12,228 for an individual). About half of them (21.2 million people, around 6.5 percent) live in “deep poverty,” or make less than half of the poverty line. Another third of the population (95 million people, or 28.8 percent) live in near-poverty, or make less than twice the poverty line. It should be noted that this is a measuring yardstick, not a measure of how much people actually need to live. That being said, these numbers mean that 41.8 percent of Americans are impoverished to some degree.

Now, if it could be demonstrably proven that this inequality of wealth was mostly due to individual choice or merit, then it would not be as much of an issue. But the Lottery of Birth can determine far more about your future than your individual choices. For example, according to Kimberly Jenkins Robinson, Professor of Law at the University of Richmond, poor and minority students are more likely to attend a school that lacks effective teachers, adequate resources, appropriate class sizes, motivated and engaged parents, as well as other factors that improve student achievement. In fact, high-poverty environments negatively affect students regardless of a student’s socioeconomic status (and ability, for that matter). Comparative studies found that children on welfare had been exposed to 30 million fewer words than middle-class children by the age of four, may already be six months behind in language development by the age of two (Developmental Science), and are between 13 and 18 months behind in reading skills and problem solving on average. This massive disparity in adequate education and critical skills means that people born poor are behind from day one.

One of the most fundamental claims of American freedom is that of equality of opportunity, otherwise known as the American Dream. This, we are told, is the ultimate form of freedom; free markets. Anyone, so the myth goes, can rise to any position should they put in enough hard work. But can that be taken seriously when we see that, after decades of passively accepting this “truth,” that so few have so much, and so many have so little? Can we really buy that everyone begins from a position of fundamental equality where anyone can achieve anything if they put in the work, when the poor are born disadvantaged and the wealthy have rarely earned their wealth?

As philosopher and filmmaker Raoul Martinez observes, “In his 21-minute inaugural speech of 2005, George W. Bush used the words ‘liberty’ or ‘freedom,’ on average, every 30 seconds. Freedom is a banner that has been wrapped tightly around the machinery of capitalism–a call trumpeted at every election, an ideal employed to justify violent dispossession, military invasion, tax cuts for the rich and welfare cuts for the poor. Yet the problem lies not with freedom but with how it has been appropriated to justify its opposite. If we want freedom to be more than empty rhetoric, if we want it to be a core principle around which society is organised, we will have to create it.”

All aspects of American society, from education to political races, discourse to foreign policy goals, are steeped in the rhetoric of freedom. As a nation, we are claimed to be Exceptional, possessed of a freedom unknown to more primitive societies. We have a duty to bring the banner of freedom roaring across the uncivilized world, whether they like it or not. And, of course, we cannot forget our devilish enemies, possessed of fearsome armament and evil motivations who will never rest until they destroy us. That is what we should focus on, not our own mounting domestic crises.

But the truth is, what we conceive of as freedom is a construct, a fantasy manufactured and fueled by the the very ideology it justifies. It is a tool, used to keep the masses controlled and the opposition slandered. It is the greatest work of fiction ever created. And it must be acknowledged as such, for how else can we go about creating Freedom without rejecting what it is not?