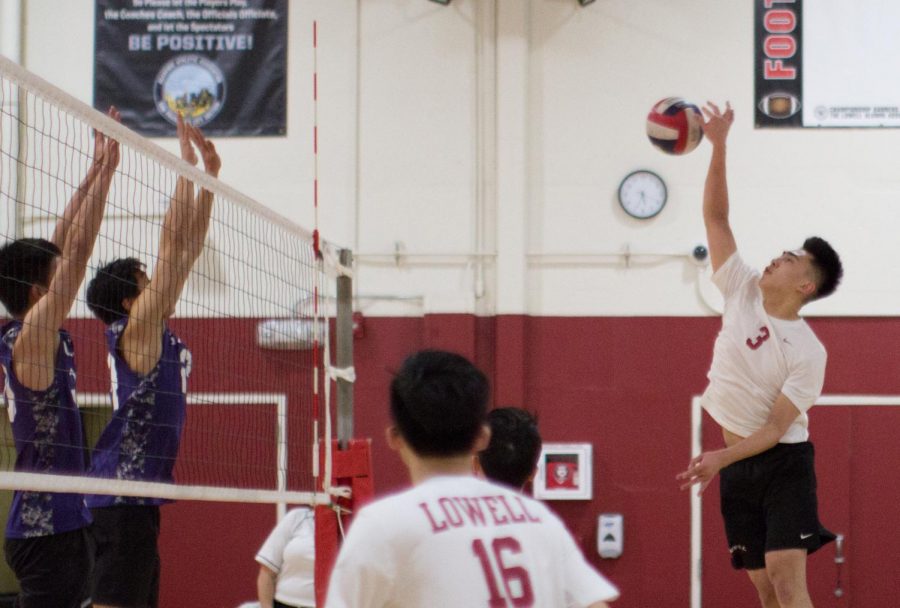 Junior right side hitter George Pan confronts the Galileo Lions with a furious spike on Mar. 20 at home.

The varsity boys volleyball started the season with a win against the Galileo Lions 3-0 on March 20th at home.

The Cardinals started off smoothly while their opponent had a rocky start. They continued to score and won the first set 25-19. According to sophomore outside hitter Benjamin Nhan, the Lions’ mistakes made it easy on the Cardinals. “[The Lions] had a lot of misserves. They gave us a lot of free points,” he said.

Despite their steady start, the Cardinals struggled at the beginning of the second set, staying two points behind. Senior libero Brandon Chen attributed this to their lack of teamwork. “There were a lot of miscommunications and that’s why we gave them a couple of points,” Chen said, “but then once we started knowing where we all were on the court, everything just kind of clicked together.” After a timeout, the Cards reboosted their morale and jumped back into the game, winning the set 25-22.

With their momentum picking up, the Cardinals started off the third set strong 7–0 and continued their lead, defeating the Lions 25-19.

Nhan says that the team was defeated by Galileo last year 3-0, so he was apprehensive about this game. Sophomore outside hitter Brandon Bui felt the same coming in, but their strong start assured everyone. “We got a sense of how things were gonna go and from there we played naturally. We played to have fun,” he said.

The Cardinals’ next match will be against the Mission Bears on April 3 at 5:00 p.m. at Lowell.