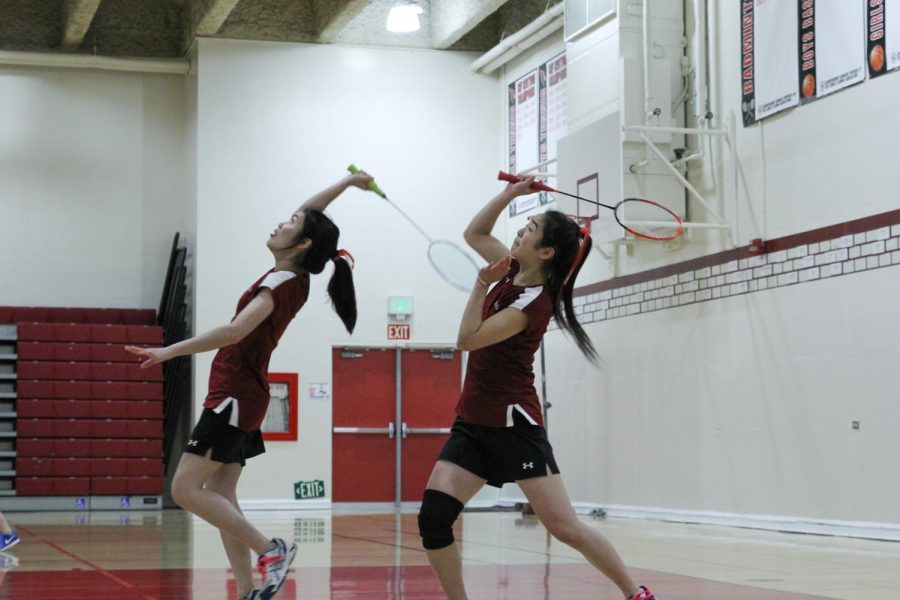 Senior Joanna Feng (right) and Elaine Huang (left) demonstrate strong partnership at the match against the Galileo Lions on Mar. 12 at home.

Lowell’s varsity badminton team defeated the Galileo Lions 7-0 on Mar. 12 at home. This second win of the season leaves the Cardinals undefeated and in second place behind the Lincoln Mustangs in the AAA/CIF San Francisco Section.

Senior Elaine Huang and senior Joanna Feng formed the first girls’ doubles team and junior Helen Guan and senior Stacy Chi made up the second. Both girls’ doubles teams won both sets of their matches with scores of 21-4 and 21-6, and 21-11 and 21-9, respectively. According to Feng, they employed a few strategies during the match to ensure their victory. “We tried to hit it on their weaker side, meaning their backhand,”  Feng said. They also tried to keep the opposing pair moving constantly so that they would eventually tire out.

Junior Jeffrey Truong joined senior Jacky Lan and senior Cameron Ness joined junior Aaron Ng played as the first and second boys’ doubles teams.They also emerged victorious with scores of 21-10 and 21-15, and 21-8 and 21-4, respectively. According to Truong, they focused on working together and setting each other up. “There’s not that much time to communicate, so it’s a lot of just trusting each other,”  Truong said.

The Cardinals’ next game is on Apr. 4 against Balboa at 4 p.m. at home.