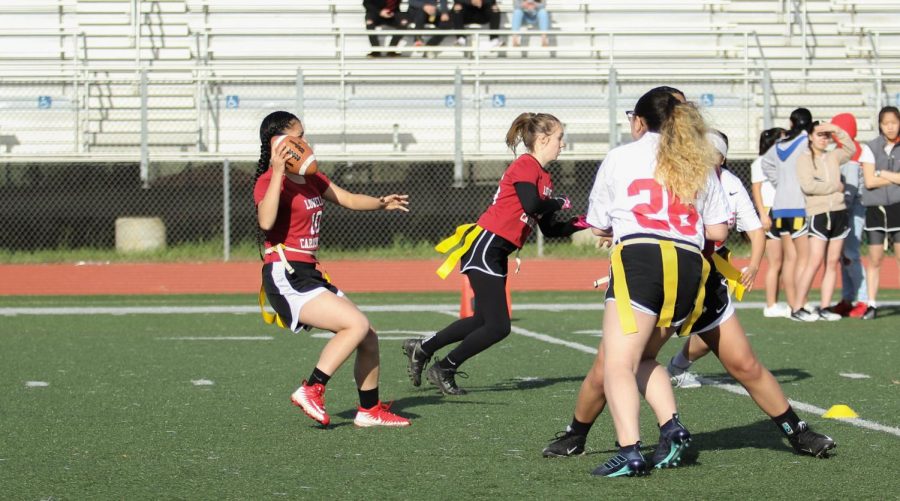 Senior quarterback and co-captain Susan Wong scans the field for an open receiver.

A crowd of girls trail away from cases of Gatorade and Pringles, some lingering long enough to be scolded by their teammates. They form a group around their coach for their post-game huddle and cry victoriously, “We are winners!”

On March 8, the varsity girls flag football team defeated the Washington Eagles 14-0 at Lowell. Although the Cardinals got off to a slow start, they fought hard in the last quarter, scoring two touchdowns and one two-point conversion.

At the start of the game, both the Cardinals and the Eagles pushed the ball back and forth across the field, but the Eagles’ defense dominated. They intercepted multiple passes and made numerous attempts to run into the endzone and score. However, the Cardinals’ defense stepped it up by preventing them from scoring. From the first quarter through the third, neither team was able to score.

Senior quarterback and co-captain Susan Wong remembers feeling frustrated about not being able to score. “It was so bad,” she said. “During half time while we were huddling up, Coach was telling me the things I should be doing and what I was doing wrong. Thank god for defense.” According to coach William Woodruff, the Cardinals’ defense saved the game.

The fourth quarter began at 0-0 and the Cardinals were fed up with the stalemate. Senior wide receiver Joanne Flores approached Woodruff, determined to speed up the game. “I told the coach that I wanted the ball,” she said. “Usually he has to read the field first, but he trusted me, the team trusted me, and I caught it.” Wong threw the ball to Flores, who was in the endzone and scored the first six points of the game.

In the last two minutes, sophomore linebacker Xueyi Tan intercepted the Eagles’ pass and scored another touchdown, racking up another six points. Lowell’s offense headed back on the field and Wong connected a pass into the endzone with freshman wide receiver Heather Liu, who scored the extra two points, ending the game at 14-0.

The Cardinals are tied for first place with the Galileo Lions as they both head into their next game undefeated. They will face the ICA Spartans on March 20 at 4 p.m.