End of the road: Vars girls basketball loses 39-42 in Round 3 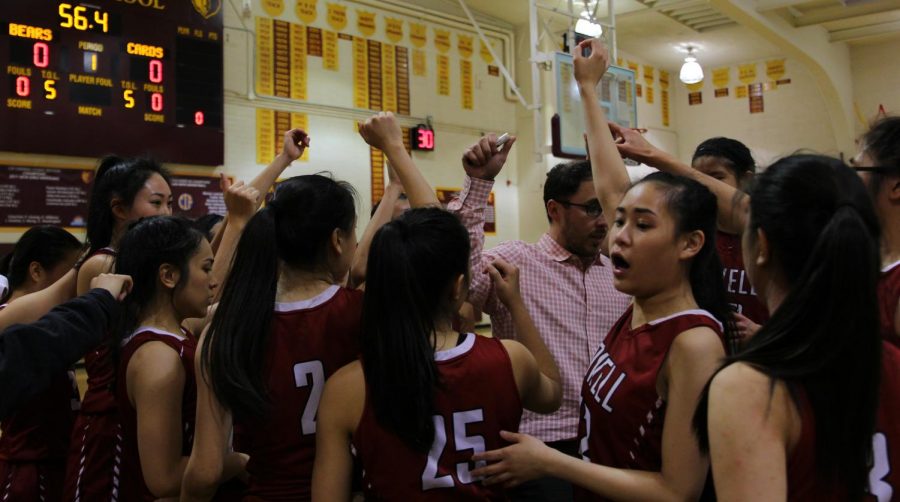 The team huddles up for a break right before the third round of the CIF State Basketball Playoffs start.

In the third round of California Interscholastic Federation (CIF) Division IV State Playoffs, the CIF State Regional Semi-Finals, the varsity girls basketball team battled the Menlo-Atherton Bears at Menlo-Atherton High School and lost 39-42. This marked the end of the road for the Lady Cards.

The first few minutes of the game were rough for the Cards. They lost the tip-off, but they were able to steal the ball. However, the Bears were quick to intercept the pass and drive it back down the court. The Bears got the first points of the night with a three-pointer. Frustrated by the slow game, head coach Matthew Magsanay called a timeout to review the plays and the Cards began to regain their confidence.

Shortly after, senior forward Catherine “CJ” Kung scored the first points for Lowell from two free throws. The Bears grabbed the rebound, then ran down the court. Unable to keep up with the Cards’ aggressive defense, the Bears lost possession of the ball and senior guard Crystal Luu chucked the ball down the court to senior guard and co-captain Lauren Chan, who passed it to senior guard Alyson “Aly” Lee. Aly Lee sunk a three-pointer and brought the Cards into the lead for the first time. Senior forward Kung and senior guard and co-captain Katelyn “KD” Lee, each scored four points to finish the quarter ahead, 13-9.

The second quarter started with attempted shots from both sides. The Bears only scored two points when Aly Lee was fouled and made both of her free throws. Two and a half minutes into the quarter, the score was tied at 15-15. KD Lee was able to perform a ball fake and score. After this, Luu scored three points and Chan scored two. The Cards’ soared ahead, 22-15. Their success only lasted moments before the Bears scored their fifth basket of the quarter, bringing the score closer to the Cards.

Kung managed to snatch the rebound and passed the ball to Chan. The ball passed between all the Cards on the court before landing in the hands of senior guard Alisa Petalver. Petalver took a quick glance at the Bears and shot a three-pointer, bringing the Cards seven points ahead. With two seconds left in the quarter, a Bear was fouled and made both free throws. The first half ended 26-21 with Lowell slightly in the lead.

Throughout the second quarter, the Cards maintained swift ball movements and were able to make long passes down the court to their teammates. “We established a lead, but I think we were content with where we were, so we weren’t really pushing up the score when we should’ve been,” Aly Lee said. “I think that came back to bite us in the butt because we weren’t able to recover from their lead.” However, in the second half, the Bears upped their game and the Cards were forced to put up a stronger defense.

The second half began in the favor of the Cards. Chan scored four points and Petalver scored another two, bringing the team 11 points in the lead. The Bears’ coach, Markisha Coleman, called a time-out. The Cards ran back to their team in joy because they had their biggest lead in the game.

The Bears came out of the time-out with a new game plan. The rest of the quarter was difficult for Lowell. The Bears’ new momentum allowed them to score eight consecutive points, bringing the score to 32-29; Menlo was starting to close the score gap.

Magsanay started to get nervous and called a time-out. Following the time-out, the Bears sank another three. But Chan was quick to grab the rebound and pass it to her teammates. Petalver scored a three. The ball changed possession between the two teams multiple times for the remainder of the quarter. By the end of the third quarter, the Cards were one point short of their opponents, 35-36.

The final quarter was slow and hard. This was a crucial game for both teams, winning this game would bring them to the regional finals, one step closer to the state championships. “I think that there were a little bit of nerves that showed up on our team that caused us to make some turnovers and not get the shots that we wanted. Menlo was able to capitalize on these things,” Magsanay said.

In the first five minutes of the quarter, the Bears scored four points and the Cards were five points behind, the score was 35-40. With the last three minutes of what could be either team’s last game, the tension was high. Luu scored two points, but the Bears were quick to follow with their own two points. With a minute left in the game, Petalver scored another two points.

“Towards the end, we had the mentality where we felt like we would lose and we had some stupid mistakes, and we can’t change it now but, I think that’s what affected us,” Chan said. The Cards were only three points behind.

With 16 seconds left in the game, Petalver, the team’s main three-pointer shooter, fouled out and Magsanay was forced to substitute in another player. If the Cards scored a three-pointer, the game would go into overtime and would have a chance to move on. After the substitution, the Bears held possession of the ball. Chan was able to run down the court and steal the ball, but time was not on the Cards’ side. She was still halfway down the court when the buzzer went off, signaling the end of the game. The Cardinals lost the game 39-42 and left teary-eyed.

Ending their season on a high note, four of the seniors made it onto the CIFSF All-League Team. KD Lee won Player of the Year; she also made it on the First Team with Chan. Petalver made it on the Second Team and Aly Lee on the Honorary Mention Team.

Last season, the team made it all the way to the State Championships. “We had a big target on our back for going to States last year,” KD Lee said. “But the good thing is, towards the end [of the season], we really fought, we really wanted it. We had people who stepped up. We had great bench energy, which I’m proud of. And everyone did a little something.” With 11 seniors leaving the team after this season, next season’s team is left with only four returning players. Magsanay is uncertain with what will happen with the team next year but has hopes of returning to States again. Chan added, “This isn’t the best you’ve seen yet.”