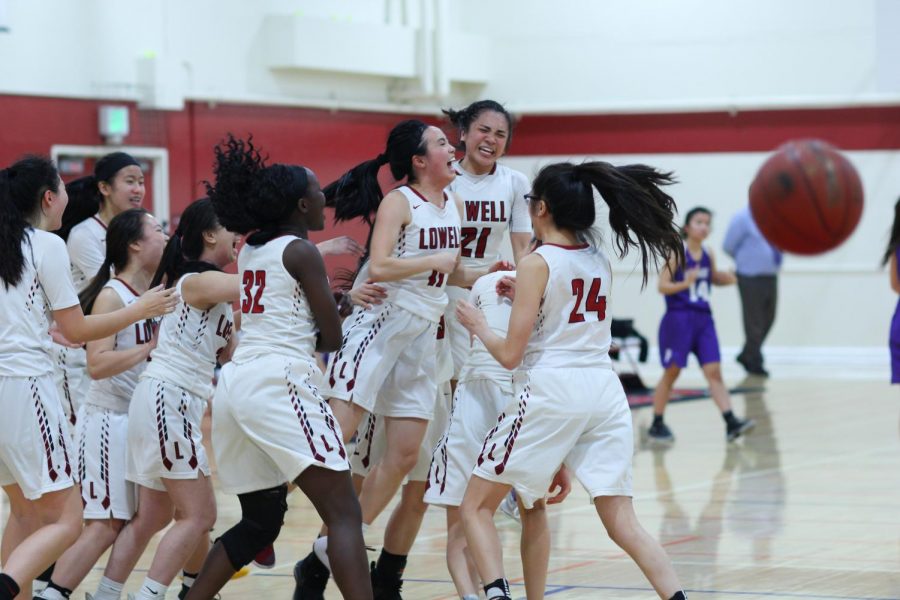 The Cardinals rush onto the court to congratulate their teammates as they head into the regional semi-finals on Saturday.

Last season, the team made it all the way to the Division V State Championships. This season they were bumped up to Division IV, meaning they will be facing tougher competition.

Prior to this match, the team knew that their opponents, the Dons, had an advantage in height, with five girls over 5’10”. The tallest Cardinal, senior forward Catherine “CJ” Kung, stands at 5’9”. Despite being the tallest, Kung said she still had to “work really hard for rebounds since the other team was so tall.” “I’m confident that if we are all on top of our game we can make it to states and hopefully win this year,” senior co-captain and guard Lauren Chan said. “We knew that they were tall, but we also knew that we were quick and we were scrappy and that was going to be a difficult match-up for [the Dons] too,” head coach Matthew Magasany added.

After losing the tip-off, Kung shot a three-pointer and scored the first set of points for Lowell. “A part of our game plan was to put high pressure [on our opponents] and high pressure often [doesn’t allow them to] be able to get good shots and they would have to take hard shots,” senior co-captain and guard Katelyn “KD” Lee said. During this quarter, the Cards were able to play defense against the Dons until the shot clock was close to running out. The Cards ended the first quarter on top, 12-11.

The Dons scored the first points of the second quarter but the Cards were able to get back on their feet and play. With strong defense from both teams, many of the attempted shots were blocked or the ball was stolen. In the last minute of the game, senior guard Alisa Petalver and KD Lee scored four points and two points, respectively. By the end of this intense quarter, the Cards and the Dons were tied 22-22.

In the third quarter, Chan opened up the second half with a pair of free throws and senior guard Aly Lee followed with a layup, bringing the team ahead by four points. The Dons were unprepared for this change of gameplay and started to slip up. Because of this, the Cards were able to force quick drives and plays down the court and ended the quarter ahead 38-31.

In the final quarter, the Cards followed the previous quarter’s momentum and scored a total of 21 points. Each player on the court had a chance to score and the Cards were comfortably ahead of their opponents 55-35. With a few minutes left in the game, Chan blocked a three-pointer and the crowd roared. The team was hyped up knowing that they had secured the win, scoring four more points while the Dons only scored three. The Cardinals finished the game 59-38 and moved on to Round II of the state championships.
CIF Division IV Girls Basketball State Playoffs Round II: 2/28 vs. Piedmont @ Home
In the second round of the CIF State Championships, the Cardinals took on the Piedmont Highlanders, the number-six seed, defeating them 52-48 at home. Senior guard Crystal Luu described this game as a lot more intense than previous ones and added that this was one of their strongest games of the season.

The Highlanders won the tipoff and went on to score a three-pointer. Shortly after, KD Lee made a basket. The Highlanders kept a tight and aggressive defense on the Cardinals, blocking many of their attempted shots. The Cards were down by six at the end of the quarter, the score was 11-17.

At the beginning of the second quarter, Chan and Petalver scored back-to-back shots. Both teams had strengthened their defense but the Cards were quick on their feet to gain more points. With the help of their teammates, Petalver swished two more threes and Luu closed off the first half by scoring an additional two points. However, the team was still short of their opponents, 24-26.

During halftime, the Cards got together and discussed their game plan for the second half. “We were definitely not off to a good start, but we definitely picked it up,” KD Lee said after the game. “We made a really fast adjustment [during half time] and it was very noticeable,” Chan added. The team decided to play the rest of their game with joy and just have fun, knowing that this could possibly be the last game of their career for many of the seniors.

The Cards went into the third quarter determined to make a comeback. The team was able to make quick passes and drives down the court to break down the Highlanders’ defense. Lowell started gaining momentum and played great defense on their opponents. After two baskets and three free throws, the team was only a point behind Piedmont. Following this change of momentum, Petalver scored a three-pointer bringing the Cards into the lead for the first time. KD Lee followed with a basket, furthering the Cardinals lead. The crowd erupted into cheers, as the third quarter ended 38-34, Lowell.

In the final quarter, the Cardinals thrived, scoring a total of 14 points. They kept their lead throughout the entire quarter. Twins KD and Aly Lee kicked off the quarter scoring five points and three points, respectively. The score gap increased and the Highlanders were so hungry to score more points and potentially win that their coach illegally called the team together for an unofficial timeout. Despite the madness of the last quarter and Chan’s left shoe falling off, the Cards were able to score six points from both free throws and baskets, ending the game with a 52-48 win against Piedmont.

Petalver scored 19 of the Cardinals’ 52 points in the game, making her the Cardinals’ top scorer of the night. She was not able to play last season due to an knee injury. This year, she came back as a starter and was ready to play. “I was able to step up during this game and this was a really good game to step it up. It felt great to be back on the come up because it’s my senior year,” Petalver said. “I think it’s a good way to end my senior year.”

Because of how important it was to win this game, many of the Cardinals’ fans were at the edge of the seats for most of the game. “I thought I was going to have a heart attack. It was a great game, very exciting all the way down to the end. I think Lowell played great [defense] and they were able to hold [the Highlanders off],” Chan’s parents, Greg and Annie Chan, said.

The Cardinals are on a four-game winning streak as they head into the CIF Division IV Regional Semi-Finals against the number-two seed, the Menlo-Atherton Bears, on Mar. 2 at Menlo-Atherton High School.