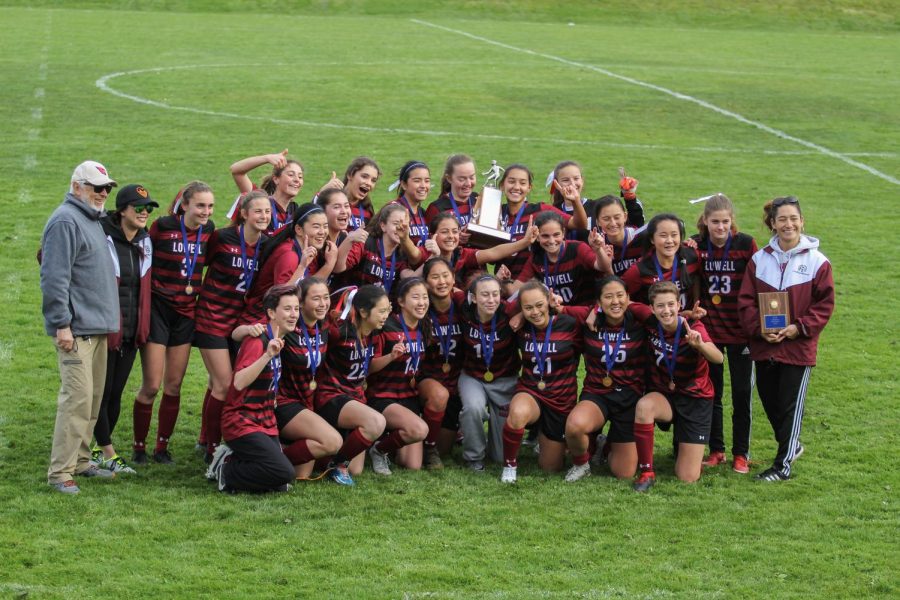 The varsity girls soccer team poses with their coaches after winning the AAA championship title for the 22nd consecutive year.

With a shutout 1-0 victory against their chief rival, the Mission Bears, the varsity girls soccer team claimed their 22nd consecutive Academic Athletic Association championship title on Feb. 23 at Boxer Stadium in Balboa Park.

Coming into the championship game, the Cardinals were anxious about facing the Bears, whose intense desire to derail their championship title reign showed through during regular season play, as they proved increasingly difficult to score against as the season went on, according to senior co-captain and defender Fiona Plunkett. “The scores have gone down. It was 4-0 and then it was 2-0,” she said. “Mission was definitely coming for us and that was very nerve-racking.”

Adding to the pressure for the Cardinals, who regularly practice on a turf field at Lowell, was the challenge of playing on Boxer’s grass field. “The grass was definitely a big obstacle,” Plunkett said. “The ball was slower and it moved differently.”

Advising the team on how to best combat these distractions, head coach Amber Wilson made it clear that the key to winning another championship title was to stay concentrated on game play. “We were a little more excited and the nerves were a little bit stronger,” Wilson said. “So we wanted to try to just keep the focus on the game in front of us.”

Entering the field, the Cardinals appeared carefree, giving each other high fives and unique handshakes, but once the referee blew the whistle to commence play, their extreme focus became evident, with players seamlessly connecting their passes and communicating to each other.

Fourteen minutes into the first half, the referee awarded the Cardinals a free kick following a handball by Mission. Senior co-captain and midfielder Camila Bodden decided to take the free kick because Plunkett, who usually takes the free kicks, was not on the field yet. Bodden’s kick went farther left than she expected and through a gap in the Bear’s defense, scoring the first and only goal of the game. “It was not the greatest goal I’ve ever scored,” Bodden said. “But I just tried not to get in my own head too much and it worked out.”

With the Cardinals remaining on Mission territory for the remainder of the first half, but failing to score another goal, they arrived at half time in the lead, 1-0.

At halftime, Wilson instructed the players on their objective for the second half of the game: to break through Mission’s wall of defensive players and to continue the intensity and speed of play witnessed in the first half. “You guys are going to start the way you guys came off,” Wilson told them.

One minute into the second half, Bodden again attempted to score a goal, but was unsuccessful. Four other efforts by players on the team followed her attempt and also failed. Nearing the 20-minute mark of the second half, the Bears became more frantic to score a goal. The Bears’ use of highly aggressive and physical tactics to stop Lowell’s offensive players from scoring eventually earned one Mission player a yellow card from the referee.

As the clock ticked down to just two minutes remaining in the game, the Cardinals fouled and the Bears were awarded a free kick. With the score at 1-0 and the Cardinals’ shutout season in the AAA league in possible peril, the Cardinals stood defensively in front of Mission players to protect their goal. They successfully prevented the Bears from scoring and netted themselves the championship title.

With her first-ever regular season as head coach completed, Wilson is reassured to have led the Cardinals to another AAA championship title. “It’s definitely a relief that we continue the legacy, so I feel excited for the team, and proud of them,” she said.

Bodden echoed Wilson’s sentiment, noting that she is disappointed to have to leave her teammates next year, but feels that she has fulfilled her responsibility as a player on the team. “I’m kind of sad, but it was a good way to go out,” Bodden said. “We did what we had to do.”