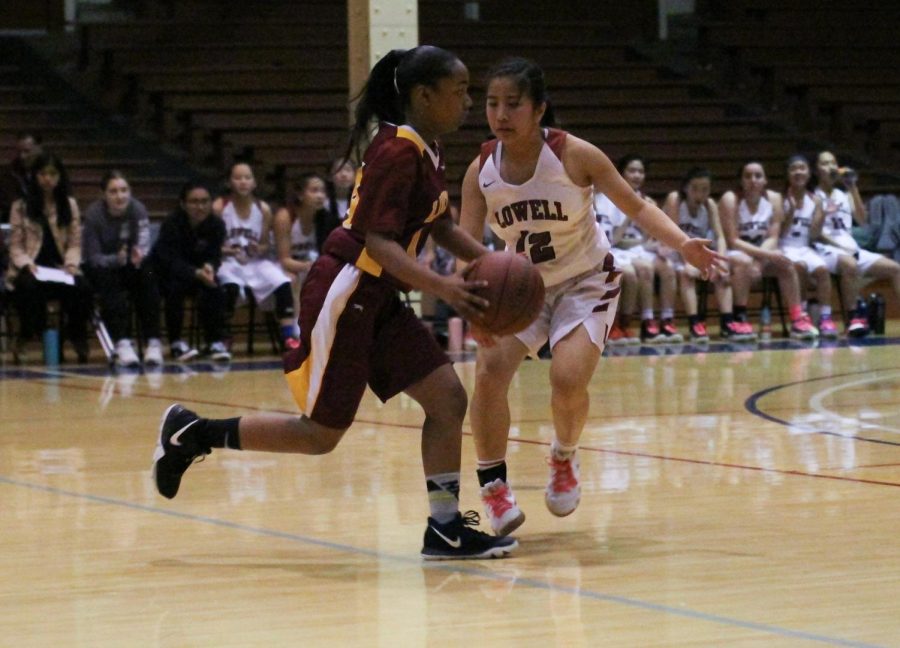 Sophomore guard Jaelyn Braganza blocks a Lincoln Mustang from advancing down the court during the annual AAA championship on Feb. 15 at Kezar Stadium.

The room took a breath as freshman point guard Elle Ladine focused on the ball. As it left the referee’s fingertips, Ladine leaped up to knock it to her teammate. The game began.

The JV girls basketball team seized the ball and the Academic Athletic Association (AAA) championship title with a score of 43-34 on Feb. 15 at Kezar Stadium. After an undefeated season, this was their fourth and closest game against the Lincoln Mustangs, whom they last played on Feb. 11.

The game started off slow, with sophomore forward Juliette Baldwin scoring the first point in a free-throw 40 seconds in. The teams faced off with quick rebounds and steals, chasing each other down the court and blocking each other’s shots. After three minutes, Ladine made a layup and the Cardinals sped up, scoring five more points before the Mustangs hit back with two layups. The Cardinals ended the quarter far in the lead at 16-4.

The second quarter started as slowly as the first, with neither team allowing the other to make progress. The Cardinals grappled with the ball beneath their net, passing it between teammates and making shots and quick rebounds but not sinking any baskets. One minute in, the Mustangs made the first two-pointer of the quarter. The Cardinals made four free throws, and Ladine made two layups. With six seconds to spare, the Mustangs scored another layup. The quarter ended with a score of 24-9.

After half-time, the game began to speed up. In the first 20 seconds of the third quarter, the Cardinals scored four points. Sophomore guard Jaelyn Braganza made the only three-pointer of the game for the Cards, putting Lowell 21 points ahead before the Mustangs scored a layup after two minutes. The quarter ended after four players piled up on the court to wrestle over the ball, with Lowell still in the lead at 36-18.

The competition heated up even further in the fourth quarter. As the quarter progressed, the Mustangs made back-to-back layups. Ladine believes that the Cardinals felt too comfortable with their lead, allowing the Mustangs to make a comeback. “[The Mustangs] came back at the fourth quarter because we were kind of getting big-headed,” she said.  With over a minute left, the Cardinals ran down the clock and won the game with 43-34.

Head coach Rachelle Hata was happy with the results of the game and the finale of her first season as head coach for the Lowell JV girls basketball team. “I think the girls have continuously shown effort and hard work throughout the season and that really came through with us to win the game at the end,” she said. Hata credited the win to the Cardinals’ defense efforts, and she aims to improve the team’s offense for next season.

Ladine believes that keeping a positive mindset has helped her and the team to succeed this season. “Every game, even if it’s just a regular season or preseason game,” she said, “I always go into it thinking with a positive mentality and telling myself I’m going to win.”