How Social Awareness Week is raising awareness for the LGBTQ community 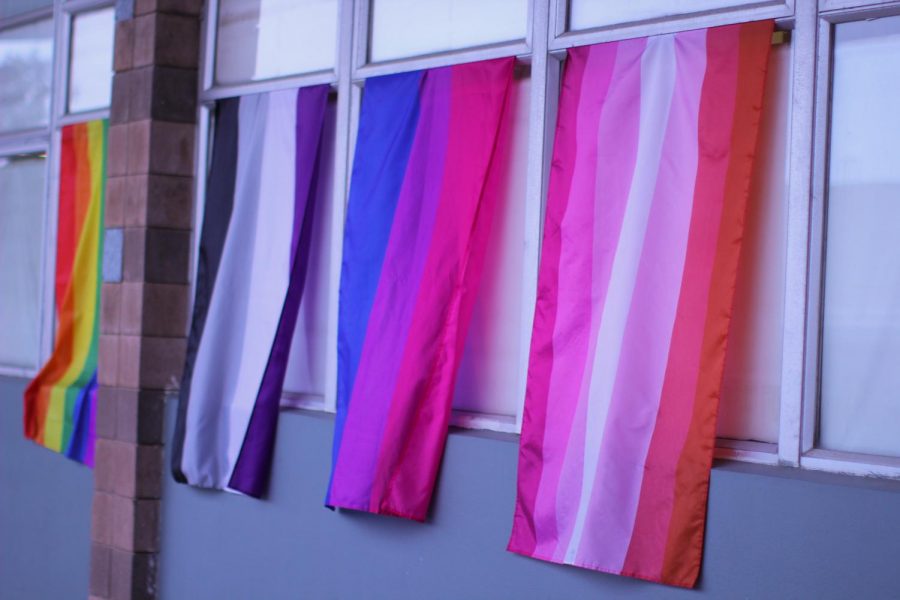 The flag walk featured flags from the LGBTQ community. From left to right: the rainbow flag, asexual flag, bisexual flag, and the lesbian flag

At a school with such a large student body, it can be hard for students at Lowell to feel comfortable with who they are, and many may not even be aware of the LGBTQ community here. Evan Chan, Student Body Council’s (SBC) community liaison, hopes to change this lack of awareness. He chose “gender and sexuality” as the theme for Lowell’s fourth annual Social Awareness Week (SAW).

Social Awareness Week took place from Feb. 4-9. Despite the Lunar New Year holiday on Tuesday, Chan and the SAW team managed to squeeze in 11 different events throughout the week.

One of Chan’s jobs as the community liaison is coordinating SAW, but he started thinking about what social awareness and “gender and sexuality” meant to him before he was even elected. Chan explains that before he became community liaison, he wasn’t out to his family as bisexual. “When I was elected, I came out to my family and I went through the motions of coming to terms with my own sexuality,” he said, “I used that as a starting point for putting together Social Awareness Week.”

SAW is usually run by Lowell Student Association (LSA) or SBC members, but it was important to Chan to include more people. Chan reached out to the LGBTQ liaison Sarah Cargill, from the Wellness Center, for help. But Chan didn’t stop there. Lowell’s Gender and Sexuality Alliance (GSA), previously known as “the Gay-Straight Alliance,” was also included. “My goal with including GSA was to try and give them a platform because I know that GSA is a smaller club and it’s important that more people know more about what they do,” Chan said.

Having a LGBTQ club within Lowell provides immense support for those in the community. Senior Gracelyn Barmore Pooley has been the president of the GSA for two years now, and understands the hardships that LGBTQ youth experience. She believes that GSA is an important way for those who identity or are allies to feel safe and be open about their experiences. “GSA provides a space for people who are LGBTQ, or aren’t LGBTQ, to just be, and there are no external pressures from anyone to be anything different,” she said.

Some of the events that she coordinated for SAW were the Open Mic event and Allyship Workshop. There was also a voguing workshop with the House of Energi, an LGBTQ community strengthening House Ballroom program. Barmore-Pooley thinks SAW is a great way for students who aren’t in GSA to get a look into the lives of students who identify as LGBTQ. “I think it’s really cool that the whole school is getting involved instead of just the small subset of people from GSA,” she said.

Barmore-Pooley explained that gender and sexuality was an important theme for SAW due to the current political climate. “Increasingly with this administration, there’s been a lot of legislative attacks against specifically transgender individuals but also just the LGBTQ community in general,” she said. She explained that even though San Francisco is a very liberal city, it’s still important to uplift the community and have a school-sanctioned event.

The theme of SAW last year was “Dreaming for Empathy,” which focused on celebrating different cultures and combating cultural bias. It was put together by Almarie Mata, the community liaison at the time. Chan explains that the past couple of SAWs have been more hard-hitting, touching on social justice-based topics. “I kind of wanted to build off of the momentum of last years SAW by doing something that was very different,” Chan said. He went on to explain that there haven’t been many events focusing on the LGBTQ community put together by SBC.

Chan also believes that this year’s SAW was different from past years because of the number of events that were put together. Chan and his SAW team started brainstorming in October of last year. He was particularly passionate about the spoken word and open mic event on Monday. “A lot of the people in Spoken Word actually identify within the LGBTQ community, so it was almost perfect,” Chan said. He explained how the Spoken Word club members brought a lot of abstract poetry that conveyed the LGBTQ experience. He also said that the LGBTQ Alumni Panel on Thursday was really interesting. The panelists were able to convey what it meant to them to experience being queer at Lowell, but also show what Lowell was like years ago, he said.

Chan and Barmore-Pooley both talked about the turnout for the SAW events. “Turnout is always an issue with SAW just because it is a school event and it’s not on the same level as say a dance,” he said. However, Chan took a particularly positive outlook on this issue. “The events that have low attendance were mostly the workshops,” he said, “but they are good to have a more intimate experience because if you’re talking about something that might be sensitive, it can be difficult to talk to a room full of people.” Chan also explained that this year SBC wanted to make SAW more recognizable, and have new, versatile apparel.

Chan, Barmore-Pooley and other devoted contributors believe that Social Awareness Week will give Lowell students a better understanding of the LGBTQ community. “I hope that by putting on these events, people who weren’t super sure that attended them learned something or were able to take something away so that they can help people in the community,” Chan said.