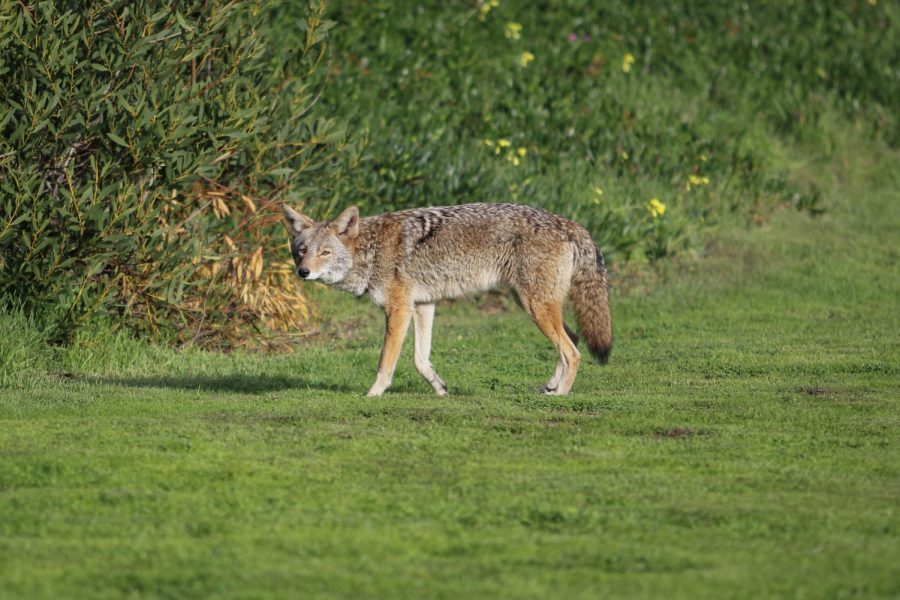 Many students and staff have spotted the coyotes by the soccer field, particularly in the afternoon.

Lowell High School, which brags academic excellence among many other accomplishments, can now add another trait to its ever-expanding resume: its new status as a shelter for San Francisco’s resident coyotes.

A trio of coyotes made their debut at Lowell a few weeks ago, and have garnered more and more attention from the community as they make more frequent appearances throughout each day. Crowds of students gather between classes every day to watch them playing on the soccer field, and tons of photos of these animals are circulating on social media. Some students have even jokingly suggested that a coyote should replace our current cardinal as Lowell’s mascot.

Freshman Ben Lester has seen the coyotes numerous times around dusk after track practices and doesn’t mind having them around. “There are coyotes all over California and in San Francisco,” said Lester. “I have friends who live in the Presidio who see coyotes all the time and they’re completely fine with it.”

Sophomore Lilo Bergensten-Oliv has also seen the coyotes on the soccer field multiple times now and enjoys their presence. “Our school is in an area with a lot of wildlife,” she said. “Personally, I think [the coyotes] are pretty neat.” Bergensten-Oliv feels that even though the coyotes may seem a little frightening, their presence isn’t an issue. “As long as students are informed about how to keep themselves and the wildlife safe, there’s no reason why they shouldn’t be able to coexist,” she said.

Biology teacher Mark Wenning, who has watched the return of coyotes to San Franciso over the past decade, is pleased to see the animals thriving in an urban environment. “I think coyotes in San Francisco are a really great thing, just like hawks and a whole bunch of other predators,” Wenning said. “It means that our ecosystem can support them, that our ecosystem is very healthy, and if it wasn’t for them, there would be too many rabbits, too many gophers.”

Wenning has worked to inform students about the coyotes, encouraging the administration to put up fliers about the coyotes and make public service announcements to the student body. He isn’t worried about the coyotes being a safety threat provided that students stay away. “As long as you don’t mess with them or mess with their offspring, you’ll be okay,” Wenning said. “They’re only doing what they’re programmed to do: protecting their young.”

According to assistant principal Orlando Beltran, the administration has posted fliers about coyote safety. Additionally, to keep students informed about the coyotes, Beltran emailed all students more information about wildlife safety and provided a schoolwide announcement during Radio Lowell asking students to stay away from the coyotes on the soccer field. “Leave them alone,” Beltran said. “You can see them from a distance, you don’t need to chase them down or get close to them or try to feed them.”

According to Beltran, Animal Control came to Lowell on Feb. 13 and investigated the forested area near the soccer field, to determine whether the coyotes have created a den there. The Animal Control workers could not locate a den, and Beltran stated that the school will only take further action (such as spreading repellent or otherwise removing the animals) if their presence persists through these next few weeks.

Bergensten-Oliv is empathetic with the animals and wants to keep them safe. “I think the administration should avoid restricting the coyotes’ habitats and definitely avoid harming them,” said Bergensten-Oliv. “They have mobility patterns like all animals and will likely move somewhere else in the future.”

Lester also feels that the admin should take a hands-off approach with the coyotes. “I think live and let live,” he said. “Unless they do harm a student…I don’t think we should spend school money messing with the coyotes. Just inform the students, ‘Don’t get too close and don’t offer them food and they won’t bother you.’”