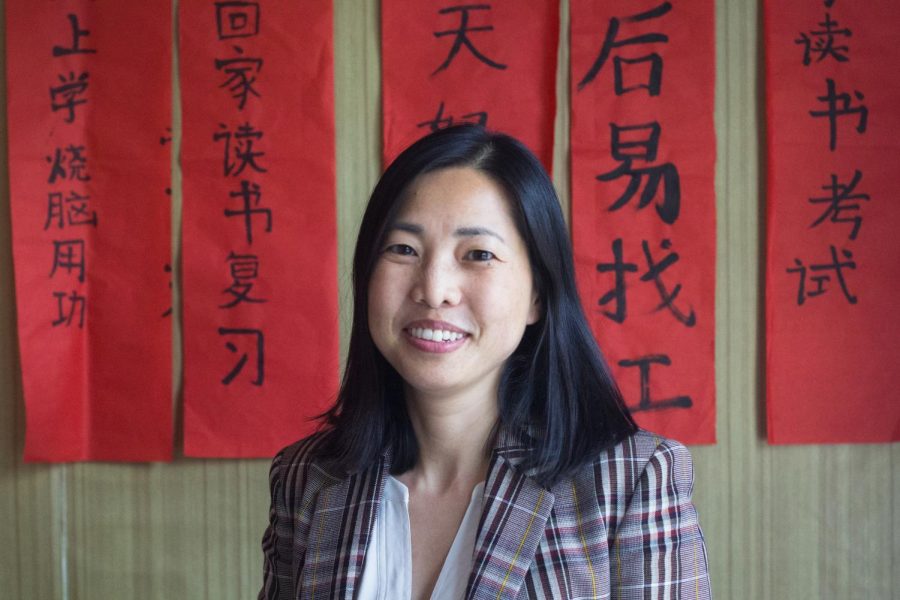 Chinese teacher Jian Liang stands in front of Chinese New Year scrolls that her students wrote to celebrate the holiday.

Families will be kicking off the New Year with a bang today; the Lunar New Year, that is.

The Lunar New Year is a holiday celebrated by several Asian cultures marking the beginning of a new year based off of the Lunar calendar. The day is commemorated with festivals, large family meals, and ancient traditions.

San Francisco Unified School District has been observing Lunar New Year in recent years by taking a day off whenever the holiday hits. Lunar New Year is never on a set date; the holiday typically falls anywhere between the end of January and the middle of February. This year, the holiday fell on a Tuesday and SFUSD arranged an unusual mid-week holiday.

Some students believe that SFUSD should have extended the holiday to two days, allowing students and teachers to have Monday off as well. While Feb. 5 is officially Lunar New Years Day, the days leading up to the event also involve many traditional celebrations in the Chinese culture. According to sophomore Kyle Lew, Lunar New Year preparations can be just as important as the day itself. However, these preparations can take days to finish. “There’s not enough time to take care of everything over one weekend that is broken up with a day of school,” Lew said.

For junior Crystal Yao, who is Chinese, preparations for Lunar New Year include cleaning and decorating the house as well as making arrangements to have a family dinner. These activities carry age-old meanings: cleaning, or “sweeping away the dust,” is done to sweep away the old and invite in the new, while traditional decorations include red banners decorated with golden, lucky characters, as well as paintings called “door gods” hung on doors to protect families from demons or bad spirits. “Lunar new year is different from New Years,” Yao said, “[In western culture,] New Years is just New Year’s Eve, New Year’s Day and then it’s over. But with Chinese New Year you need to set aside an entire month to plan it out.” The Lunar New Year itself is a 15-day celebration that starts on the first new moon of the lunar calendar and ends on the first full moon.

Tonight, Yao and Lew will be using the holiday to reunite with relatives over an “auspicious” meal. “We eat fish and noodles for wealth and longevity, and oranges for luck,” Yao said.

After Tuesday night’s festivities, Yao will be carrying out one more Lunar New Year custom: on Wednesday, Lowell’s Lion Dance club will be traveling to Las Vegas for a series of Chinese New Year performances around the city. The lion dance is a traditional Chinese dance performed by a pair of performers in a lion costume accompanied by the music of drums, cymbals and gongs. The meaning behind the club’s dance follows one interpretation of a Chinese legend; according to this telling, a Chinese village was once threatened by a monster, called Nian,  that appeared every new year. One year, a lion appeared to protect the villagers, and the following year the villagers dressed up as a lion to protect themselves against Nian. In addition, the loud noises of percussion instruments are said to chase away ghosts and spirits.

Lion Dance club members are excused for a three-day field trip and will be performing at hotels such as the MGM Grand until Thursday. They return to San Francisco on Friday.

Overall, many students appreciate that SFUSD has recognized Lunar New Year as an official holiday. “I think [a day off] is important for the people that traditionally celebrate Lunar New Year, such as students that recently immigrated here and still hold traditions,” Lew said. The time off gives students and families time to arrange family reunions and observe traditions that have been held for centuries.