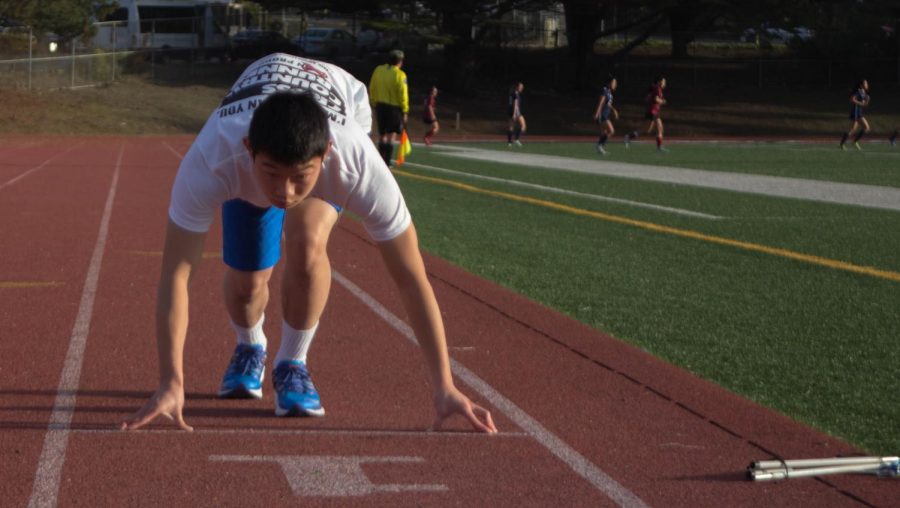 Ethan Fung, a Lowell junior born with rod-cone dystrophy, races against the odds and wins first place at the 100th CIF State Championship.

At the 100th California Interscholastic Federation (CIF) State Championship on June 1st, junior Ethan Fung placed first in the Mens Para Ambulatory 400-meter race. He became the first Lowell student to ever win a state championship in track and field. Moreover, Fung is the first blind athlete from Lowell to compete in a state track competition.

Due to his visual impairment, Fung can only see light contrasts and a basic outline of people and objects, so he trains for races with another teammate who guides him on the track field. During track practice and races, Fung and his guide each hold one end of a running tether while his guide runs slightly ahead of him, giving him verbal instructions along the way. “We have to have actual coordination, no matter how tired I am on the races,” Fung explained. “I have to make sure that we don’t get out of sync or we don’t go into the wrong lane.”

Although this practice has since become a normal part of his track routine, Fung shared that it was initially difficult to run with another person. “That was more practicing running with a person, which is the hard part,” he said. “By the end of last year, that took a majority of my time rather than just running.”

Through track, Fung has developed strong bonds with his guides. In the past, Fung’s guides have included teammates Raymond Huang, Lowell’s class of ’18, and junior Nathaniel Chamberlin. One of his favorite track memories is when Huang received the Pursuing Victory of Honor award, which honors high school athletes who have demonstrated great sportsmanship. Fung was glad to see Huang being recognized for his hard work and dedication as a guide.

Fung considers himself to be a mid-distance runner, with his best events being the 400- and 800-meter races. However, because there is no Para division for the 800-meter category, he can only participate in the 100-, 200-, 400-meter races and shot-put events, in which the participant throws a shot – heavy ball – as far as possible.

Despite these challenges, Fung considers his condition to be an encouragement for him to work harder. “I see it as motivation for myself more than anything else,” he said, “because the fact that I can still enjoy running even if I can’t see too well is cool.”

Prior to the CIF State Championship, Fung was nervous because of the intense competition. “It was a lot of pressure because everybody there is in top shape and they’re top-notch,” he said. “California is a running and racing state, so [the runners] are very competitive.”

During the first 250 meters of the race, Fung recalls sprinting at a really fast pace. By the time he passed the 300-meter mark, he grew tired and wanted to stop, but mustered up his remaining strength and continued running. Nearing the end of the race, he began to slow down, because he thought the race was over. “My guide said ‘almost done,’ but I miscomprehended, so I took it to mean ‘done,’ so I actually slowed down 2-3 seconds,” Fung recalled. Huang thought Fung was tired, and slowed down his pace to adjust. However, when Fung reached a full stop, Huang realized there was a miscommunication and urged Fung to continue running, saying, “Wait, wait, you’re almost done, go go go.”

Fung finished the race with a time of 1:02.57. After placing first in the event, he felt more relieved than proud. “That one moment with the 400 was kind of marred by my relief,” he said. “I can’t say I was super proud because I almost lost [the race].” For this upcoming track season, his goal is to run a 400-meter race in 58 seconds and set a new personal record.

Fung’s coach is confident in his abilities. Leong has witnessed Fung’s “hardworking, motivated, [and] independent” spirit consistently during track practice. He recalls a particular instance from the last track and field season when Fung’s persistence especially shone through. “At the beginning of the [last] season, he had some soreness injury, so he spent about three weeks in the weight room,” Leong said, “and when he was ready, [he] let us know, and just started doing all the workouts.”

Fung’s motivation stems from his belief that hard work brings about positive results. He thinks that “running is not something you need to be made to do.” Although being naturally fast can offer a advantage, he believes that “you can work hard and become a pretty decent runner; you don’t have to start out amazing or be gifted.”

No matter which track race Fung participates in, he knows that his team will be there to support him. “Definitely running with your teammates is something that feels good,” he said. “It feels good to run at home–at [Lowell’s] track–because there’s always gonna be teammates and friends who are rooting you to go on.”