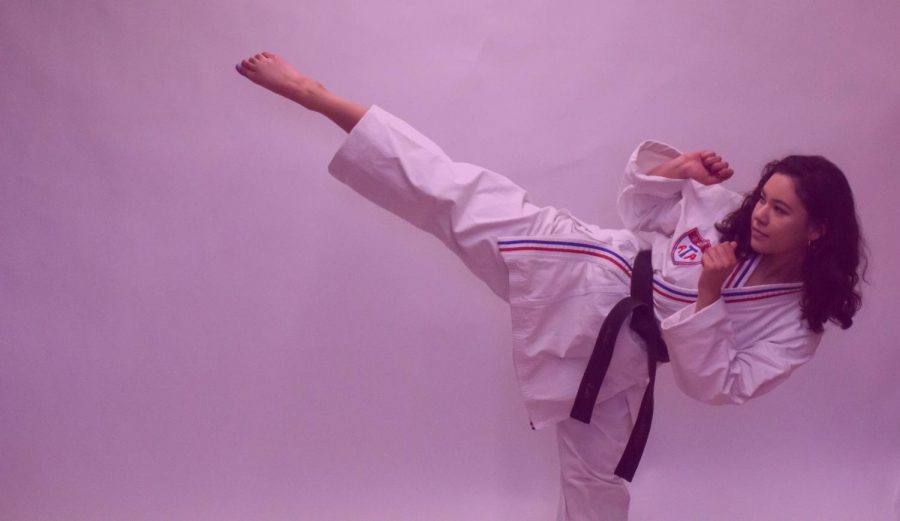 Junior reporter Kate Green talks about her experiences with taekwondo and how she doesn't fit the stereotypical schema of a martial artist.

At the beginning of each school year, I am often asked to share an unexpected fact about myself with the class. I watch as the cliché icebreaker works its way across the room, and when it’s finally my turn, I say proudly, “I am a third degree black belt in taekwondo.”

Every time I am met with the same array of reactions–a few looks of mild admiration, and an overwhelming amount of shock and disbelief. Dozens of pairs of incredulous eyes look me up and down trying to fit a 5’2’’ girl with glittery eyeshadow and a colorful dress into their mental image of a black belt.

For much of my ten-year taekwondo career, I too struggled to see myself as a legitimate martial artist. Only after years of hard work have I come to realize I have no responsibility to conform to anyone’s expectations but my own.

My journey with taekwondo began when I was six years old. At that age, I felt compelled to copy everything my older sister did, so I joined her at Park’s Taekwondo on Noriega St. I presumed that participating in taekwondo would make me as tough and grown up as she was, but I grossly miscalculated the extent of my undertaking.

Taekwondo, like any martial art, offers a unique athletic experience. Not only is there a focus on the physical strength required to achieve taekwondo’s signature head-level kicks, you must also train your mind in accordance to core Korean values. Attributes such as courtesy, self control and perseverance impose a strict atmosphere of “yes, sirs,” “no, sirs,” and rigorous expectations.

Though in the long run these principles would prove beneficial, at the time I found the disciplined environment difficult to cope with. Wanting to stick with my sister, I had enrolled in a class with older students. The age gap between myself and my peers, paired with my novice skill level, made it difficult to keep up. I found myself devising excuses to skip class, and later tearfully riding in the back seat of my mom’s car, pleading, “I just don’t think I can do this.”

But whether I liked it or not, each Monday and Friday I found myself back in the studio. I sat and stretched self consciousnessly on the shiny blue mats, wishing I was anywhere but at taekwondo. I loved many aspects of the sport, such as learning new techniques each week and watching the skillful higher ranks practice their forms, but I lacked the self confidence to see myself progressing in martial arts. When I visualized a successful martial artist, I saw a fierce yet stoic warrior, strong and athletic. Then I looked at myself, a self-professed Hufflepuff who was always picked last in P.E. class. The two didn’t add up.

Yet, for all my self doubt, I didn’t quit. While my sister moved on to soccer and eventually fencing, I could never fathom disappointing my instructors and telling them I’d given up.

After a few rocky years at Park’s, the business changed hands, and my parents decided to switch me over to a new studio. A family friend recommended Navarrete’s Black Belt Academy in Noe Valley, where I still train today.

My early years at the Navarrete’s were equally as demanding. I still got demolished in sparring matches, had difficulties keeping up with the grueling workouts and was often self conscious of making mistakes due to the strict, demanding atmosphere.

One class proved particularly deflating, as I was pinned under a boy twice my size during jiu-jitsu style ground fighting. The whole class watched as I futilely struggled to pull myself out of his grip. My instructors told me I wasn’t allowed to give up, so time ticked painfully by until class ended and he finally took me out of the chokehold.

But gradually I improved. My techniques refined, and I started winning sparring matches. My body strengthened to keep up with the push ups and planks. I began to alter my schema of a black belt, as I befriended older girls at the studio who were friendly and accepting, yet aggressive forces to be reckoned with in the ring.

The Navarrete’s also taught workshops on how taekwondo and its mindset can be applied to everyday situations of bullying at school and harassment on public transport. Being a martial artist slowly came to mean being willing and equipped to stand up for myself and those around me, which felt much more achievable.

Though I was still plagued by doubts over whether I was truly cut out for taekwondo, especially when trying to explain my sport to those outside my studio, I worked my way up the ranks. In 2011, I passed my black belt test in front of the entire school and my family, and I have since joined our studio’s leadership training program, won regional American Taekwondo Association tournaments and earned my third-degree black belt. Perhaps most significantly, those cornerstones of courtesy, self control, and perseverance have helped shape me into who I am today.

So, faced with a room full of classmates in disbelief that I am a black belt, I don’t take offense. I understand it’s easy to make surface level judgements, and the way I present myself does not align with most people’s expectations of a martial artist. That being said, I hope people can broaden their perception of strength to include those usually left out of the picture. If I can become a black belt, than there is no reason for anyone else to confine themselves to others’ expectations.