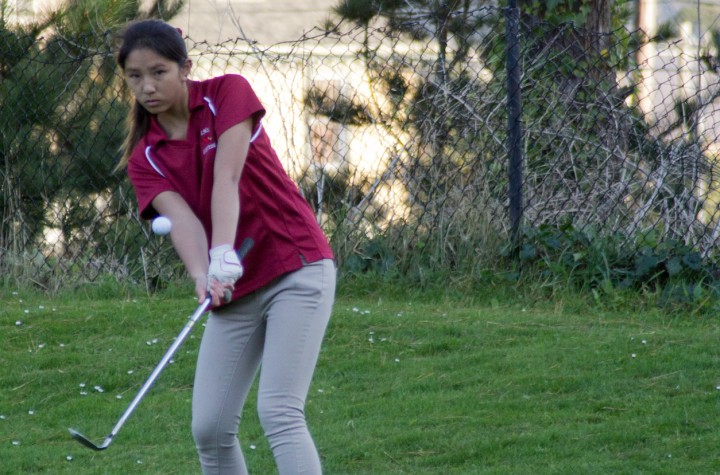 Senior Sheridan Louie chips the ball onto the green during the Cardinals’ 281–267 loss to Washington in the championship on Oct. 29 last season. Photo by Huimin Zhang

For years, people have debated whether or not golf is a sport.

“A lot of people don’t think golf is a sport because there’s no running,” junior Vivian To said. “If you don’t sweat in the activity, people don’t think of it as a sport. But golf is actually really difficult, since you can’t just power your way through it. It’s very technical, and you need balance and concentration. If you forget one little thing, your whole game is way off.”

“It’s very technical, and you need balance and concentration. If you forget one little thing, your whole game is way off.”

Any golfer can verify that it comes with as many challenges as any other sport, and the girls’ golf team is working hard to rise up to these challenges this season.

This season, the team is returning stronger than last year.

The team displayed their good sportsmanship during the match. “The Gal girls aren’t as experienced as we are, but we had a lot of fun helping them out,” To said. “If one of them got their ball trapped in the bunker, then we’d help them figure out how to hit it out. That was fun for me, because it’s fun to see what you know and help other people improve.”

Almost the whole team is returning from last year, according to head coach Robert Ray. Eight players are competing for the six spots for the matches, and Ray hopes that the competition will push them to their highest levels of play.

The Cardinals are hoping to make a comeback from last season’s narrow 281–267 defeat to Washington in the championship match. “I know the girls want to beat Wash, and so they’re practicing really hard for that,” sophomore Alyssa Lau said. “We’re all practicing a lot more and going out to hit during the weekends so that we can get better.”

The team is working on its consistency and focusing on its short game, shots near the putting green and hole, according to team captain senior Caroline Hsaio. A strong short game is essential to getting a top score, as even a few extra strokes can damage the score dramatically.

“We’re all practicing a lot more and going out to hit during the weekends so that we can get better.”

Putting requires a specific skill set and a lot of mental concentration, according to To. Before they can make a putt, players have to judge how “fast” the green is, which means that they have to figure out how hard they need to hit the ball to get it to the hole. Next, they have to “read the green”, or check if it’s sloping in any way. Players then counter the slope by aiming their putters to the right or left of the hole.

There is a lot of pressure on the players when they putt, according to senior Emily Brandau. “During the match with Galileo, I had a couple par opportunities, where one putt was the deciding factor,” Brandau said. “Getting a par is a great accomplishment, and it really helps your score. But then I putted and missed, which was the worst feeling in the world.”

The golf team’s next game will be against Wallenberg on September 23 at the Golden Gate Park Golf Course at 3:30 p.m.