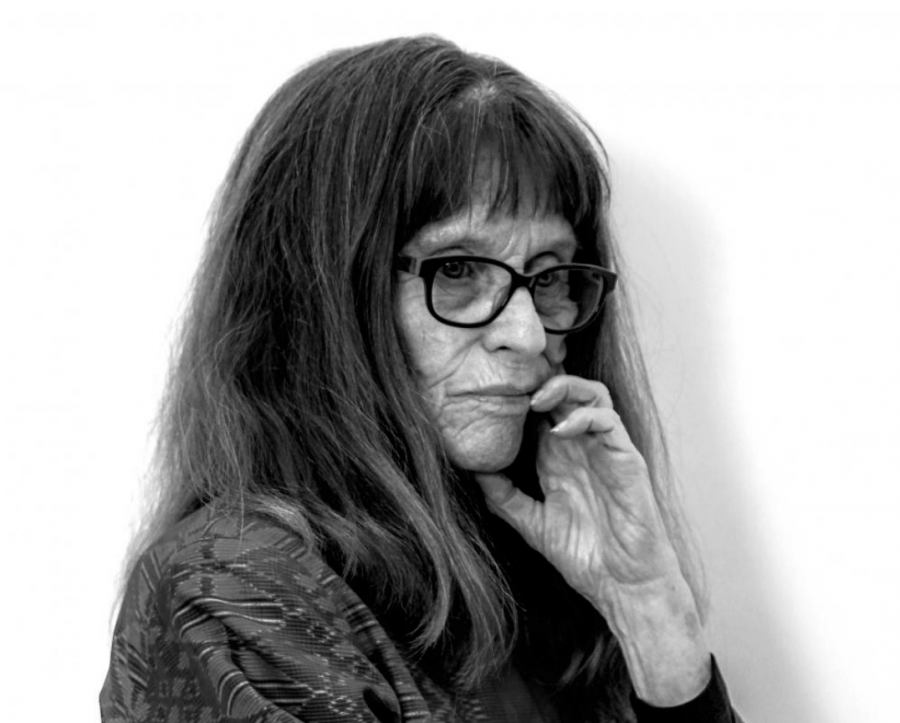 As Creedence Clearwater Revival’s “Lookin’ Out My Back Door” played on the loudspeaker, more than 150 students, friends and family members of beloved English teacher and yearbook advisor Mary Carolyn Nickels greeted one another with hugs and somber faces as they gathered for a 90-minute celebration of her life on Nov. 3 in the Carol Channing Theater. A member of the Lowell faculty for 12 years, Nickels died of cancer on Sept. 25 in her home on Treasure Island. The memorial included speeches given by Nickels’ close friends and family, and a performance by the Lowell Choir of “Amazing Grace” and “Earth Song,” arranged by Frank Ticheli, and concluded with a small reception outside the theater.

Movie-style posters for The Catcher in the Rye, which Nickels’ students had made for a class assignment, along with posters signed by hundreds of Lowell students the day following Nickels’ death, served as the backdrop for the service in which many friends, family members and students paid tribute to the varied ways in which Nickels made an impact on their lives. The ceremony began with a video montage created by Mark Chambers, Nickels’ longtime partner. The montage featured photographs of Nickels from her early twenties through the final years of her life, highlighting the four years she spent in Thailand as a Peace Corps volunteer, her numerous international travels and her many close friendships.

Through speeches given by close friends, colleagues, family members and students of Nickels, members of the audience were able to learn, and laugh, about other people’s memories of Nickels’. Although the people who Nickels knew were vastly different, it was made apparent that she profoundly impacted each of their lives.

“She was a mother, she was a daughter, a sister, and an educator, a volunteer, a caregiver and a grandmother. We all knew her in so many different ways,” said Kris Kingston, who met Nickels in 1980 when they were both teaching at a high school in Seattle. “But Carolyn wore every hat well. Every hat that she wore, she put [herself] into that totally.”

In her tribute to Nickels, Kingston also shared how Nickels often would call on the way home from teaching to tell stories about her students. “That story would go on for hours,” Kingston recalled. “She loved a great story.”

Steve Fox, who was a Peace Corps volunteer with Nickels in Thailand, said in his speech that the 24-year-old Nickels he first met was the oldest member of their volunteer cohort, Thai Group 34, which earned her the unofficial position as “the mom” of the group, a role she took very seriously. Nickels often wrote letters to Fox and many other members of Group 34, when they relocated to different regions of Thailand. “Long before Ronald Reagan, Carolyn was ‘The Great Communicator,’” Fox said. “Postage, not food [or] gasoline for [transportation], was her single biggest monthly expense.”

Continuing to stay in touch with Nickels after their Peace Corps experience ended, Fox said it was apparent to him that “for Carolyn, Thailand, Peace Corps and teaching formed the very warp and weft of her identity.”

With her fervor for her Peace Corps experience in Thailand still intact after more than two decades, in 2001, Nickels founded Friends of Thailand, an organization that aids former members of Peace Corps Thailand in keeping in touch with one another. The organization also helps to fund Peace Corps projects in Thailand. Katherine Hendrix, the current president of Friends of Thailand and a board member of the organization since 2006, spoke of another “hat” Nickels wore well, that of “a supercharged dynamo…who epitomized the power of one.” Hendrix described Nickels’ proactive and persistent nature that caused her to be loved and respected by hundreds of current and former Peace Corps volunteers and to be the impetus for numerous Friends of Thailand projects getting off the ground. “She was a force of nature,” Hendrix said. “She didn’t spend time thinking about how she could make her mark. She just went out and did.”

To honor Nickels, the board of Friends of Thailand has changed the name of their fund for projects in Thailand to the “Carolyn Nickels-Cox Memorial Fund,” Hendrix said.

Also sharing moving speeches about Nickels were two San Francisco Unified School District colleagues—Lowell principal Andrew Ishibashi and Lisa Beth Watkins, who worked with Nickels at Visitation Valley Middle School—along with Lowell juniors Nicole Stetsyuk and Karime Carillo-Sanchez. Both Stetsyuk and Carillo-Sanchez were in Nickels’ registry and spoke of how Nickels went above and beyond in fulfilling her role as a teacher. They described Nickels as being their friend first, and teacher second. “She was my first high school friend,” Carillo-Sanchez said. In registry, she “made sure we all had someone to talk to,” Stetsyuk added. “She gave me all these friends.”

After Nickels’ grandchildren read several letters written by Nickels, and the family gave their last remarks, her brother, Scott Nickels, concluded the ceremony by leading everyone in singing “Take Me Out to the Ball Game” as a tribute to Nickels’ love of the San Francisco Giants baseball team. As friends, family and students exited the auditorium, some wiped tears from their eyes, some took one last look at the posters filled with signed messages from Nickels’ students and some swayed gently to Earth, Wind & Fire’s “September,” one of Nickels’ favorite songs, as it played in the background.