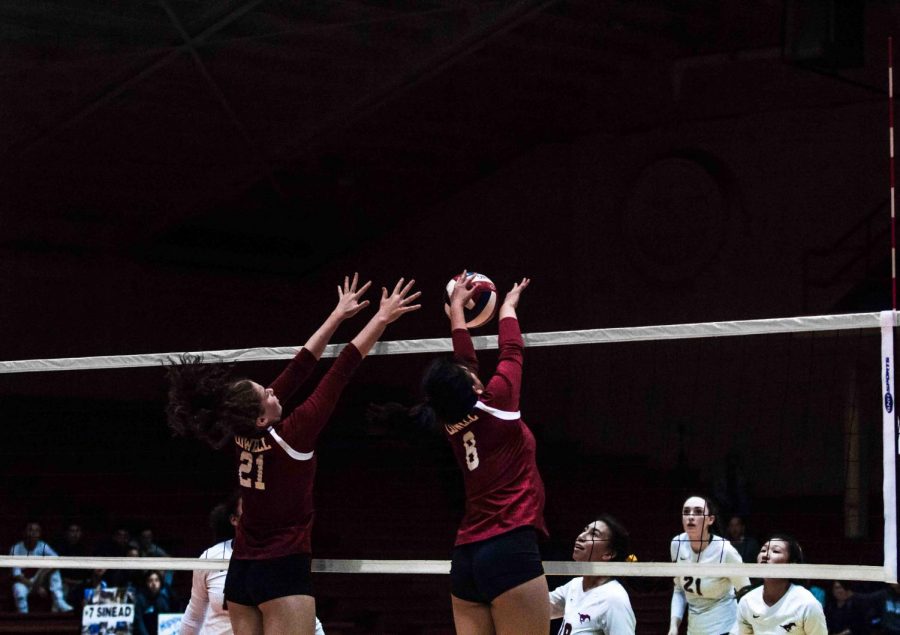 The Lowell varsity girls volleyball team narrowly lost to the Lincoln Mustangs 3-2 at the AAA Girls Volleyball Championship on Nov. 2 at Kezar.

The first set began with cold apprehension: if one team were to dominate here, it could foreshadow a very one-sided match. Lincoln scored first, driving deep into the Cards’ undefended midcourt. Seniors setter Sinead Beaupain and outside hitter Annamarie Kelly responded with three quick scores, after which the game settled into a standoff. Several long exchanges followed, then the Mustangs pulled ahead despite the Cardinals’ defense. When the first time-out concluded, however, a solid defense by sophomore middle blocker Alina Qi and Beaupain began to close the gap. This unwavering defense foiled almost all attempts by Lincoln to pull back into the lead, and Lowell eventually won the set 25-23.

As the second set began, the Cards’ strategic outlook was apparent. They clearly possessed an advantage, and Lincoln would have to win three sets in a row to win the game itself—an uphill battle for the best of teams. While in the opening moments the two teams were tied,  Lincoln soon managed a winning streak that put them ahead. Lowell kept themselves close on the Mustangs’ heels, but Lincoln persisted in their dominance and eventually won the set 25-21.

At the onset of the third set, no progress had been made: the teams stood 1-1. Lowell took an early lead of the set, but Lincoln halted the Cards’ attack with a winning streak that put them firmly in charge of the court. The ebb and flow of the set ensured that the score gap between the two teams varied in size. It persisted nonetheless. As Lincoln stood poised to claim the set, Lowell scrambled to stop their advance. It proved a fruitless attempt, and Lincoln won the set 25-20.

The fourth set was the opposite of the second, with the Mustangs in the lead and the Cards in a tricky situation. Senior defensive specialist Samantha Hum and Kelly scored the first point, followed by a flurry of follow-ups. Undaunted, however, the Mustangs immediately closed ranks and began to chip away at Lowell’s lead. Though they briefly took the lead, it was short-lived and the Cards remained ahead. Senior outside hitter Eunice Go, in particular, was personally responsible for several of the Cards’ scores. Though Lincoln remained close in score for the duration of the set, the Cards eventually won 25-19.

The fifth set was uncharacteristically quick but unsurprisingly close. Lincoln took the early lead this time, while Lowell’s defense struggled to compensate for their surprising vigor. Beaupain and sophomore middle blocker Alini Qi eventually broke the streak, aggressively trying to seize the initiative like they did in the previous set. Beaupain’s serves and Kelly’s hits managed to bring Lowell close to winning, but the Mustangs energetically smacked down the Cards with a final win of 15-12.

Despite the last-minute loss, head coach Kelly Sung was proud of the team’s composure, defense, and ball control, which she had emphasized since the season began. “I think our team did well staying composed throughout the match,” Sung said. “Our defense did a great job of reading around the block and picked up some great digs.”

The Cards also participated in the CIF NorCal Tournament. They defeated the Salinas Cowboys 3-1 on Nov. 6, but soon lost to the Christian Brothers Falcons 3-0 at the playoff match on Nov. 8.