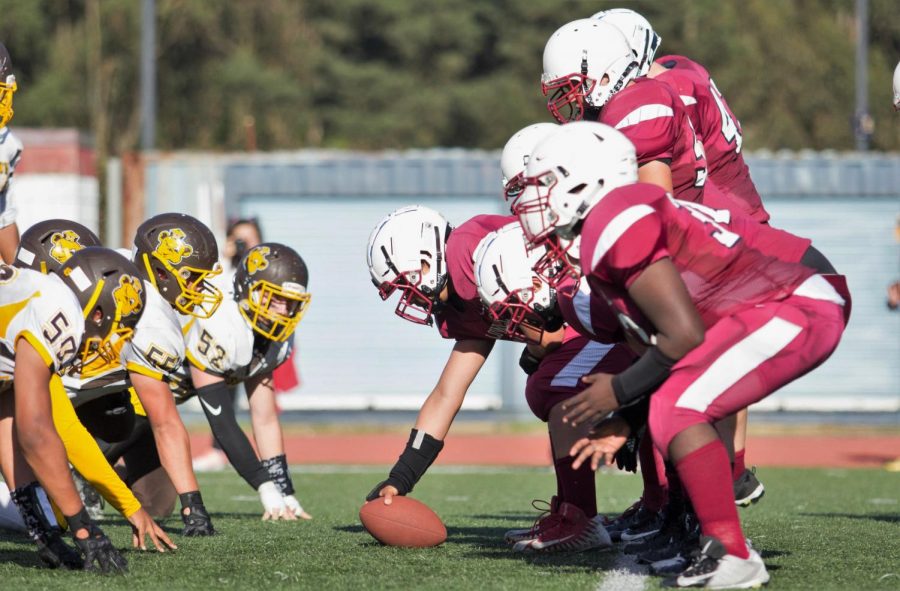 Senior center Sergio Herrera gets ready to snap the ball as the rest of the line get in place.

After beating the Washington Eagles 22-0 at the Battle of the Birds game on Oct. 19, the varsity football team lost 42-12 to the Mission Bears, the four-time Academic Athletic Association varsity football league champions, on Nov. 1 at home.

The game started off with the Cardinals dominating the field. While both teams remained in a tenacious standoff throughout the early parts of the game, the Cards clutched tightly to each scoring chance. Senior running back Treyvor Turmon had an 80-yard run in the first quarter and the Cards claimed a 12-7 lead.

It was not a lasting lead. After Turmon was taken out of the game due to a heat stroke, the early optimism of the Cardinals disappeared. In a series of fruitless attempts, Lowell eventually concluded the game with a 42-12 loss.

Five days later, in a meeting on Nov. 6, principal Andrew Ishibashi announced that he would be forfeiting the Cards’ last game against the Lincoln Mustangs on Nov. 9. The varsity football season was concluded abruptly, which was upsetting to the players. According to Ishibashi, the decision to forfeit was out of concerns for the players’ health and he also did not feel comfortable with the team barely meeting the minimum number of eligible players to play.