Frosh-soph football blows out the Lions 50-0 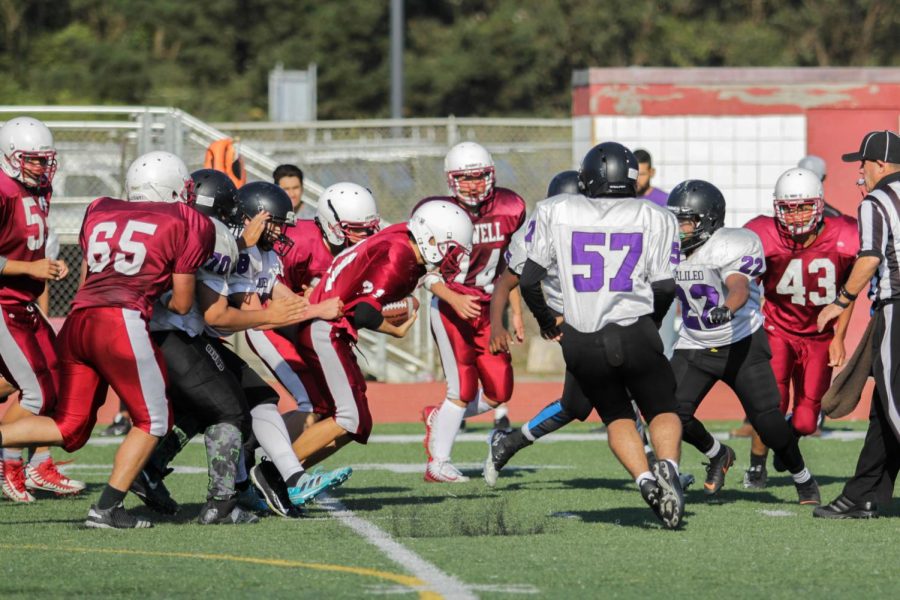 Sophomore wingback Justin Yee wrestles his way through defenders for a first down against the Galileo Lions on Oct. 5.

In their last home game, the frosh-soph football team blew out the Galileo Lions 50-0, setting their season record at 1-2. They are currently ranked third in the Academic Athletic Association.

Despite the team’s losses in the previous two games, against the Lincoln Mustangs and the Balboa Buccaneers, they remained hopeful and persistent during the contest. Frosh-Soph head coach Chris Ayag was optimistic about the match. “After the last couple of games, the players were more experienced [and] they had more confidence,” Ayag said.

The Cardinals started off strong, scoring consistently throughout the first quarter. The Cards had a strong defense, preventing the Buccaneers from scoring any points. Halfway through the quarter, sophomore wingback Justin Yee scored the first touchdown, gaining six points for Lowell. Sophomore running back and safety Dayaun Gray followed with the two-point conversion. Shortly after, sophomore running back and middle linebacker Anthony Serrano scored a rushing touchdown, bringing the score up to 14-0. Gray followed with another two-point conversion. At the end of the quarter, Lowell was up 16-0.

In the second quarter, the Cards focused their attention on defense. “We wanted to get some turnovers, and we wanted to score on defense,” Ayag said. They were able to recover a fumble and catch an interception.

On the offensive side of the ball, the Cardinals continued to dominate, scoring touchdown after touchdown. The team’s main problem during the previous two games was blocking on offense, so they focused on it throughout. “We had to block the right people, so we really went over that. I think we achieved that.” As a result of the improved blocking, Yee was able to break through and run 30 yards for a first down, completing that drive with a touchdown. He put six points on the board, bringing the score up to 22-0. The Cards finished the first half at 38-0.

The game was slow during the third quarter, as neither team scored any points.

The Cardinals continued to dominate the field in the fourth quarter. During the beginning of the quarter, freshman linebacker and tight end Javier Ramirez scored a touchdown, bringing the score to 44-0. Freshman quarterback Reese Miller rushed the final touchdown, capping the game with a 50-0 win over the Lions.

Reflecting on the game, Ayag was proud of the team’s achievements. “They were just smoother and they were well aware of the jobs they had to do,” Ayag said. “They communicated really well, and it led to our victory.”