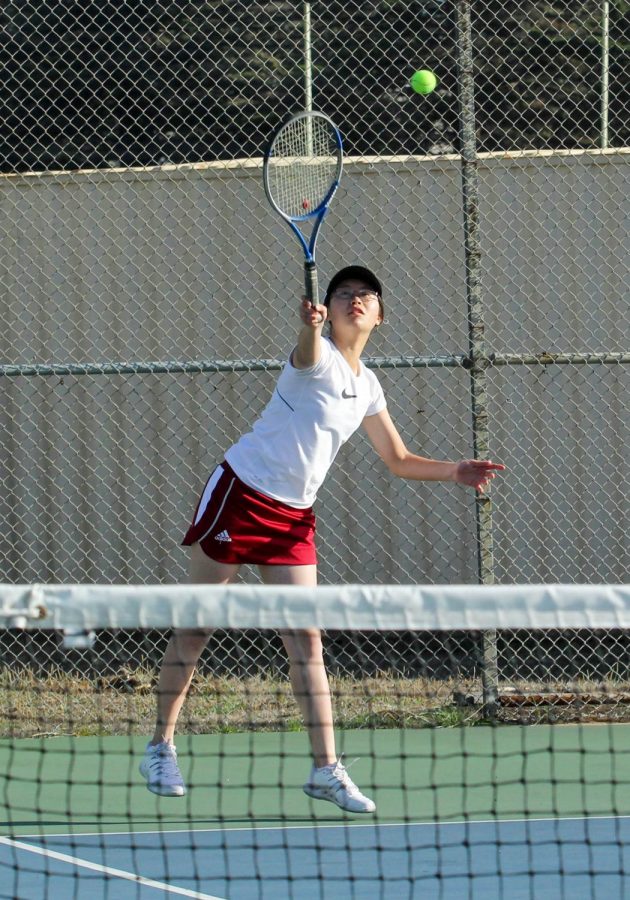 Sophomore Christine Shen concentrates on her overhead shot against the Balboa Buccaneers on Oct. 10.

The varsity girls’ tennis team defeated the Balboa Buccaneers 7-0 on Oct. 10 at Lowell. This win ties the Cardinals with Washington for first in the Academic Athletic Association San Francisco Section.

Wednesday marked the first time Canotal and Shen played doubles together, and they put a strong emphasis on teamwork and consistency. The match began smoothly with Shen acing multiple serves. But the duo hit a brief rough patch at the beginning of their second set. After Coach Darryl’s advice during a break,the girls returned to the match galvanised. “[The Balboa players’] shots had a lot less pace than we’re used to,” Canotal said. “So we had to learn how to use that to our advantage and be more aggressive.”

According to senior co-captain Julianna Eng, the team was overall “pretty solid, hit some great shots, and really stayed focused and consistent.” With All-City and their crucial tie-breaker game against Washington fast approaching, she plans for the team to hone their strategizing.

The Cardinals will face off against the Washington Eagles on Wednesday, Oct. 17 at 3:30 p.m. at Lowell.